In the preparation for the get-together many are picking up on the number Two connected to this Celebration.

Drawing a circle on the ground and stepping through it, marking the transition into Spring.
Bringing rushes that people can make into Brigid's crosses.
Inspired by the number two - a protective number. Bringing a Brat Bhrid put out overnight to get the energy... the vision behind this being of Brigid leaning over the land and spreading her cloak over everyone. More information of the Brat is under the Brigid's Eve paragraph here - Bridget's Life, Wells and Customs

The plan for Imbolg this year was to meet at the gate at Tara, see who turns up and “go with the flow”.. 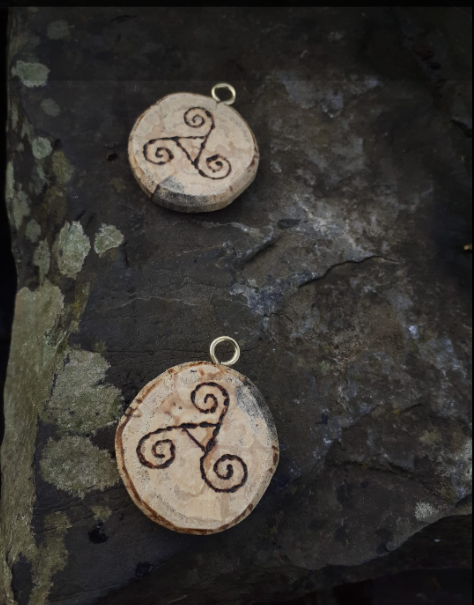 While we were waiting for anyone else to turn up, a man hopped out of his car and came across to us, maybe he was going to join us?

But no, he had a gift, a lovely pendant with the 3 spirals – so appropriate for the day as Brigid is seen as the mother, maiden and crone – and this time of year it is the maiden’s time to emerge.

Made by him from an oak tree at the back of Tara, so we would always have a little piece of Tara with us.

Then he joined a group heading up to Tara, and somehow it didn’t feel that’s where we were meant to go.

We both decided to head to the well, where we felt a real feeling of peace and “being in the belly”, sheltered from the wind and surrounded by the higher ground.

I had left out my brat Brid overnight and put the water from the tray holding it into a jar and with a sprig of rosemary blessed ourselves before we started.

We lit two candles, and some incense (notice the little bird formed by the smoke in the photo below), read out an invocation and stayed for a while in silence.

We opened the gate and blessed ourselves with the water.

Two beautiful green plants were growing inside the darkness of the well which reminded us of the new life and buds opening at this time of year.

Then we were joined by Bernie Mac who read out an appropriate piece about believing and having faith in yourself. So the two became three, which seemed appropriate and we went off to get a nice warming bowl of soup. The heavens opened as if to bless us and the land, and then the blue sky was visible again.

Really lovely feeling from the day. Even though the hill was packed, with cars all the way down the road, no one came to the well…

For those tuning into the seasonal energies, a non-denominational, universal lattice of spiritual inter-connecting love.

comments and photos from Martin in Galway / Navan, Bernadette in Navan and Tara, Susan in Faughart, Nora and Louise in Peak District, Derbyshire, Loreto sends a prayer from Meath.

They were taken from old Randalstown house before Tara mines covered the area in a tailings pond. Eilishe's conservation in action. Maith thú

Bernadette's snowdrops in Navan and some on Hill of Tara

Susan was watching the moon on Brigid's Day and then visited Faughart where St. Brigid's Well is in the graveyard.

Snowdrops in Nora's garden and in Louise's, both in the Peak District.

St. Brigid's Prayer from Loreto M. and a mandala from Louise that echoes Martin's 5 pointed star.