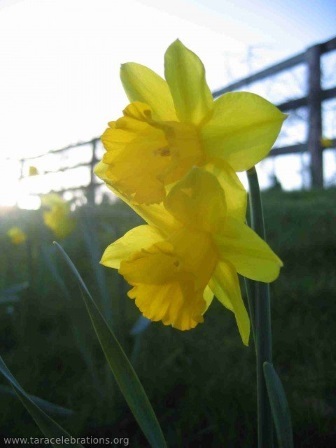 Brighter days are on the way! We are coming out of the days of darkness and into increasing day light.

At one celebration Martin told us that:

Lus an chrom chin an Irish (and Scottish, I think) translation into golden headed lighted one, name for the flower.

To me the English language isn't poetic enough to describe it, photographed on the sun set of the vernal equinox at St. Patricks well, Tara.

We noted in 2009 that we are still in Imbolc and Spring Equinox is the mid point of that season where the days and nights are of equal length.

After winter Samhain it marks the time of year when fertility replaces barrenness. 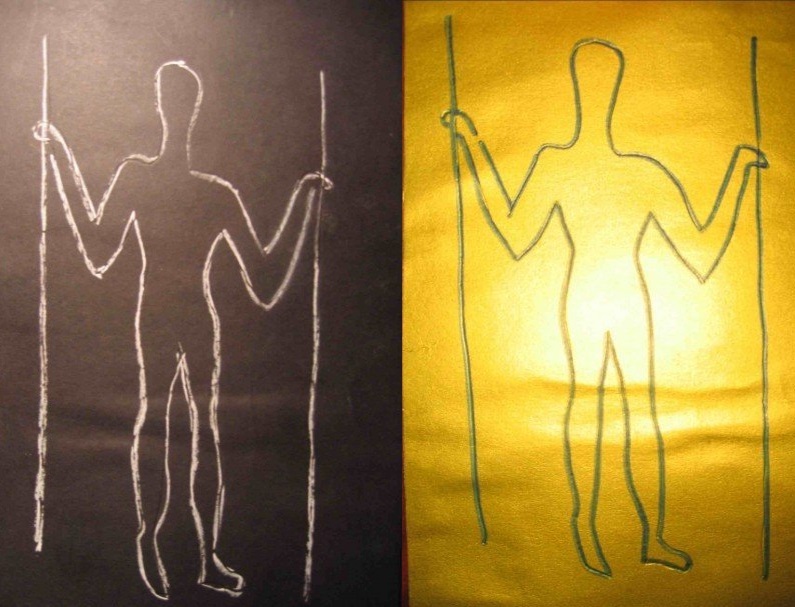 We enter the male half of Imbolc where Patrick complements and balances Brigid.

Their integration brings the birth of the Bealtaine leanbh na Griann (Child of the sun...a golden child).

In 2008 at this time of balance we invoked a positive archetypal male energy, one that complemented and supported perfectly the Brigidine energy.

An energy that portrayed:

Hence we turned over the Black Patrick to recognise the Golden Patrick.

Spring (Vernal) Equinox is the mid-point of Imbolc when the sun all over the world rises east and sets exactly west. The underlying energies are of balance and equality. "Equinox" means "equal night" in Latin and this time of year is when there is equal light and dark in our days.

It is time for continued work and renewal of the intentions made at the start of Imbolc, to bring the seeds to sprout. We see the bud burst and the first flowers and the promise of Summer days. We see the lambs bounding around the Hill and mad March hares. We too recognise this vital energy stirring in us to carry us through our continued growth this year.

Pat shared these thoughts at Clogherhead in 2017...

In researching this special time of year we discovered that celebrations have been ongoing through all ages by all peoples of all beliefs and none. Christians, Muslims, Jews, Buddhists (and pre-Christians, Muslims, Jews & Buddhists), Romans, Greeks, Egyptians, Mayans, Native Americans, Celts, pre-Celts, Wiccans, Pagans and more ALL celebrate/celebrated the Spring Equinox.

All are acknowledging at this time the return of Light, Fertility and Hope to our lives. Men and women, animals and plants, even the Earth itself seems to rejoice in this wondrous time of renewal and rejuvenation. Equality through the ages, beliefs and species all right there. 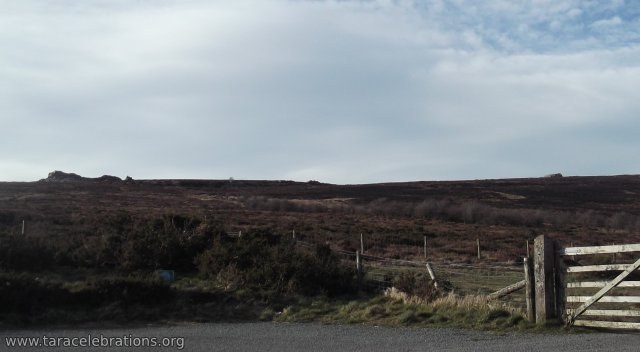 Although there are many different versions of the stories about these two places they share similar legends.

Loughcrew is high land with prominent hill summits orientated approximately east - west, near Oldcastle, Meath. The Stiperstones is also a high ridge (photograph of stones on the horizon) in Shropshire.

The Devil is said to sit on his chair at the Stiperstones calling together all the unearthly spirits, on the the night of winter solstice, when the King is chosen for the following year.

Loughcrew is the legendary resting place of many High Kings of Ireland, the highest place (Cairn T) being the tomb of Ollamh Fodhla, a great king who created the Brehon Laws.

Although the Annals of the Four Masters have him buried at Teltown (see Lughnasadh). Ollamh Fodhla's Seat, aka the Hag's Chair, is on the outer kerb of Cairn T.

At both the rocks are said to have fallen from the apron of a mythical figure. At Loughcrew it is the old woman, the hag, Cailleach, goddess, who loosens her apron.

The Stiperstones legend has the added information that it was the Devil and he was travelling from Ireland across Britain (or the Devil organised six giantesses to do the work).

Other sites with similar legends

The Devil making a journey, often trying to build a bridge, arises in several legends.

At Seascale in Cumbria it is said that he once tried to build a bridge between there and the Isle of Man. Inevitably, it would seem, his apron split and the stones fell into the sea, bar one. This remains as a rock, Carl Crag, on the shoreline bBetween Seascale and Drigg, with two white seams showing where the apron strings were once wrapped.

Apron Full of Stones is the name of a large cairn, on the eastern edge of Kingsdale Beck, near Ingleton, in the Yorkshire Dales. This limestone area has a scattering of gritstone and sandstone stones. The Devil appears again - he was collecting stones in his apron for a bridge over the River Lune at Kirkby Lonsdale when his apron string broke. The legend goes on to tell how he is duped by an old woman whose soul he desired.

There does seem to be a link in the mythologies between the Devil, an old woman and collections of scattered or standing stones.

St Michael' Mount in Cornwall, south west England, joins in with a similar legend - it is said to have been built by a giant and his wife, Cormoran and Cormelian. They chose granite and Cormelian was forced by her husband to carry the stones in her apron. But wives are bold and when he fell asleep, she decided to change it for a lighter greenstone..... however, he awoke and discovering the deception, he kicked her, her apron strings broke and she dropped the greenstone. A piece of it is still lies on the causeway leading to the Mount.

Pendle Hill in Lancashire has a bad tempered Devil. He wanted to get rid of the annoying people at Clitheroe Castle (a few miles west). So he picked up various large stones, put them in his apron then threw them towards the castle. Not having a great aim most of them missed, which made him angrier and in a rage he accidentally dropped a great pile of rocks on the south side of Pendle Hill, creating the Devil’s Apronful on Apronfull Hill.

In Scotland the Devil wanted to fill at loch near Ballingry, Fife, with stones. The inevitable happens, the apron strings break, the stones scatter across the land and the Devil goes home in a huff.

Back to Ireland and at the tombs of Carrowmore the Cailleach flew over the region with her apron full of stones, she accidentally dropped them and they scattered across the region

Chris Corlett writing in Archaeology Ireland magazine in Autumn 2006 relates how, when visiting the Gossan Stones in Wicklow, he observed that they lay on a north - south axis with the V shaped valley of the Devil's Glen to the west. He says:

It is likely, therefore, that the setting sun formed part of the ceremonies associated with the viewing of the equinox rising sun at the Gossan Stones.

We can have snow in March... in 2018 we shared these signs that winter still held a grip...

On Earth everyone's experience is different;

but wherever you are, have a wonderful turn of the season.

Balance as understood in Equinox Ceremonies

When your energy is flowing freely and balanced, your four basic selves, emotions, mind, body and spirit, are in unity.