How to make a St. Brigid's Cross

There is an excellent article with clear diagrams of the basic four armed cross at https://fisheaters.com/stbrigi...

St. Brigid's crosses are often made during a get-together at Imbolc or specifically on the eve of her feast which falls in early February.

It is sometimes related that in olden times, in the evening, each family member might have collected a bundle of rushes or sometimes straw. They wove the crosses then dipped them in water from a holy well. This is also practical, as damp rushes are easier to bend and work with. During that night they were left outside on the window cill so that St. Brigid would bless them as she passed over the land.

Different areas have different traditions and it is best to make the cross in whatever way feels intuitively 'right' for you and your intentions.

It may be made out of reeds or rushes, straw, but also grass, cloth, in fact anything that can be bent into shape and is workable. We have used pipe cleaners, paper, thick wool, lollipop sticks, or just drawn the cross on paper or card.

How is the cross used?

The animals were blessed with the crosses. It is said that Brigid, as an infant, could only drink the milk of cows with red ears and placing her cross in the cowbarn would ensure that there was a plentiful supply of milk. It has also been suggested that it was the three-armed cross that would be put in the cowshed.

They were also kept in the houses and general barns, usually by or above the door or put up in the roof or on the rafters of the kitchen. The cross offered a general protection and a specific protection in that it would save a house from fire and malevolent forces. Some say they should be refreshed each year, taken down and burnt, whilst others maintain that left up they gain more power with each passing year.

When a person had a headache the sign of the Cross was made with St. Brigid's Cross on the head of the person and it was kown to cure them.

Brigit’s cross is, amongst other things, a symbol for the cosmic cycle. Some have suggested that it is an ancient representation of the cardinal points of the sun, ie. two solstices and two equinoxes dividing the year into quarters or season.

The more complicated cross with several crossing centres is known as Brigid's Bow - Bogha Bhride. This has similarities to the Schratterlgatterl (found in Germany and the Tirol regions) as described in the wonderful book The Tradition of Household Spirits by Claude Lecouteux.

St. Brigid's Cross - How did it originate? 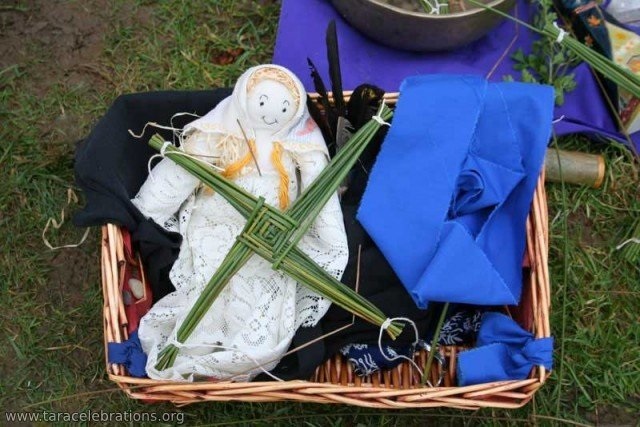 There are a couple of legends that relate how the making of a Brigid's cross became so important at Imbolc.

The story goes that Brigid was able to convert a dying pagan chief to Christianity on his death bed as she sat there telling him about Jesus.

The man was so ill it was impossible to talk to him rationally and to give him instruction that might result in a conversion. Thus quietly Brigid sat at his bedside and began consoling him.

As she talked she reached for some of the rushes covering thefloor and out of them made a cross to illustrate what she was talking about. Through her weaving she explained how salvation may be attained.

The pagan chief (in some versions of the story, her father) converted on seeing the cross and the symbol became highlypopularised with this story. Whilst this may be true there isevidence to suggest that this particular type of swastika design is a symbol used throughout prehistory and would be familiar to basket weavers of most traditions.

On Saint Brigid's Eve there is a custom in some places in Ireland of making crosses of rushes on straw, and hanging them in the home in honour of Mary of the Gael. Few, however know the origin of this praiseworthy custom.

When Saint Brigid and her companions were spreading Christianity in the West of Ireland, night overtook them on the Neifinbeg Mountains and they lost their way. Seeing light in a house nearby they went thither. A man and his wife, both pagans, were the only occupants. Brigid got the required information, and before leaving, the whole company were offered a drink. This Brigid did not like to refuse, and the woman went to get it. On returning she offered the first drink to Brigid. Before drinking it Brigid picked up a rush and immersing it in the milk, made the sign of the Cross with it. The man who had been staring at her asked her why she did that. 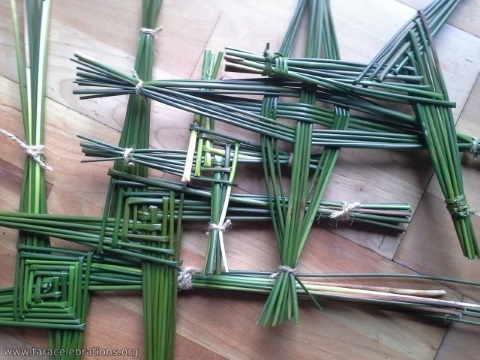 "Because there is poison in it", said Brigid.

"Poison"? said the man in suprise.

"And who put poison in it"?

The culprit then threw herself at Brigid's feet, imploringly, asking for her forgiveness.

"I'll forgive you if you tell me why you wished to poison me", said Brigid.

"The gold cross which you are wearing". said the woman.

It is said that from that day till the day of her death Saint Brigid only wore a silver one, which she kept hidden so as not to tempt anyone.

She told Christians afterwards that anyone who would make a cross of rushes or straw, and who would put it under the roof of the house in memory of her own deliverance from death by poison, that house would be under her protection and neither harm nor burning would happen to that house or it's inmates.

Different designs and even one from a colourful pizza box....

1st February 2020 and Nora M shares photos of some made at a special morning Celebrating St. Brigid’s Day at An Tobar. 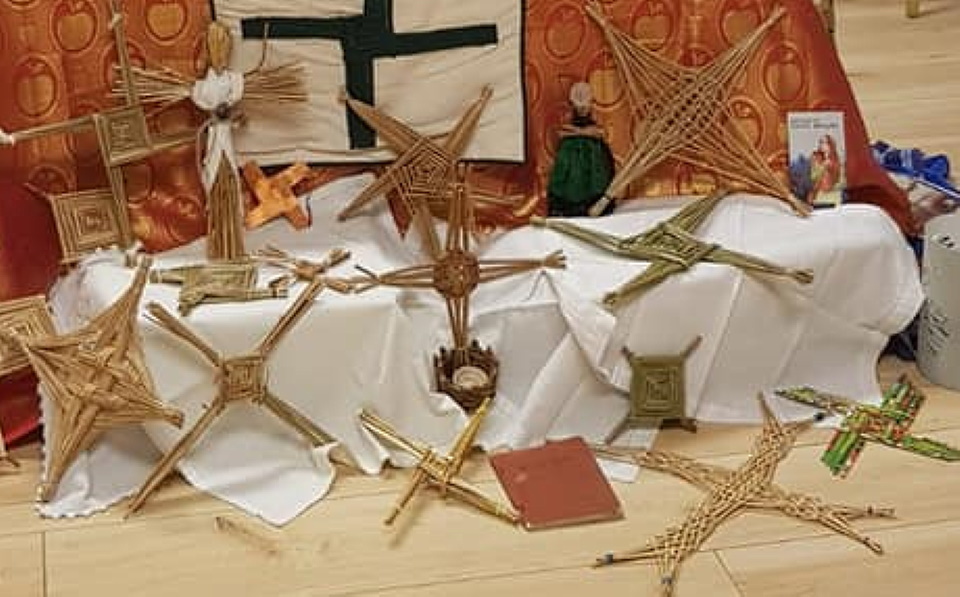