Each place has a unique quality and energy and it will always be surrounded by local legends and folklore.

Depending on our cultural background, on our own experience and whether we operate from our emotional, physical or mental body we have different ways of noticing the Sense of Space, Spirit of Place and / or Genus Loci.

Thus, as humans, we watch and listen, restrict the babbling mind's thoughts, are ready for whatever magic a place is willing to share. Most of us acknowledge that different places have different effects and there is often a need to respond to whatever it is we are 'picking up' on. 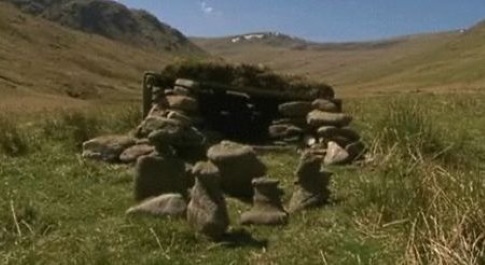 The Cailleach, with her family, lives in many places, one surviving traditional home being at the Hag House, Tigh na Bodach, Glen Lyon, Scotland.

Glen Lyon has numerous ancient sites, the Gaelic name -Gleann Lìomhann - translates as "valley of Lugh", after the Sun God in Celtic mythology.

According to local lore, the Cailleach and her family were once given shelter in the glen by the local people. So grateful was she for the hospitality given to her family that she left the stones with the promise that, as long as they were cared, she would ensure the glen would continue to be fertile and prosperous.

As the goddess of the land the Cailleach was believed to be guarding the grazing cattle in the summertime. The locals brought the 'family' of stones out of their house in the spring (at Beltane in May) and returned them to the house for winter (at Samhain the end of October). 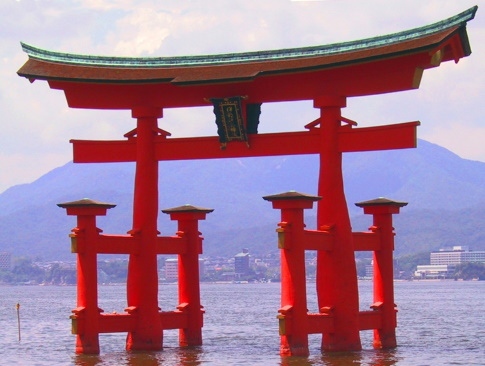 Shinto belief includes several ideas of the genus loci, called kami. There are said to be millions of them in Japan. Kami can be described as beings or to a quality which beings possess. Kami are not separate from nature, but are manifestations of the universal life energy.

The Shinto shrine usually has a red torii gate (marking the crossing from the mundane to the sacred), guardian dogs, lions or fox statues that sit on each side of the entrance, and near the shrine a purification fountain to wash your hands and face.

When visiting you call the attention of the kami by ringing a bell or clapping your hands. Then you may thank the kami for their presence and offer your petition. Each kami has their traditional practice and ritual.

In 2010, at Bealtaine, we acknowledged the beings on the Hill at three separate places. Read more here.... 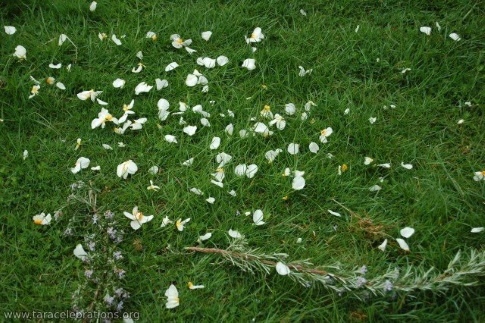 2nd connection - we acknowledged the energies of the south at Mound of Dall (Blind), which pairs with the Mound of Dorcha (Darkness) ... someone driving to the ceremony said that there was a big dark cloud over Tara!!

We knocked on the Mound with elder and rosemary to encourage the nature spirits to wake up and come again into the land of the living. We blessed and thanked the land using a form of flower petal divination as a means of communication with the fairy realm.

Please be thoughtful when you share a gift or offering at a place, particularly outdoors. Anything bio-degradeable might seem ok but the weight of gifts hanging on a tree can bring down branches and remember that trees, plants and wildlife generally can be damaged by food left lying around. Grains, apples, bread and milk will go mouldy and they also cause mould and rot. Food left in a building or lying on the ground will attract rodents.

It is often enough to present your gift or offering etherically and energetically with good intention rather than physically adding something.

You can also place your gift while you are there and then remove it as you leave. Remember the country code

Take only photos, leave only footsteps.

Just as each place in the outer landscape has a genus loci many believe each home has it's own 'atmosphere' and protective guardian.

To acknowledge and thank their part in maintaining the happiness of all beings within the home it is good to create a tangible expression of your gratitude. This doesn’t have to be anything grand. A theme of the fire, earth, air and water elements might seem appropriate, a bowl with local stones and earth, a vase of flowers, some seeds, fruit, a feather, candle with the house name written on it, anything found around your house. Do what seems right and what you feel represents the spirit and the energy of the place around you. 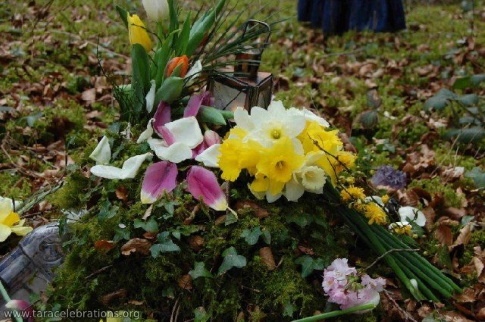 On a sunny day recently we were led to a site deep in the wood where there was a small hillock set like a navel in the forest.... silence, the aroma of pine in the air and a profound sense of tranquillity, moss covered logs, stones, trees and ferns.

So moved were we by this tangible presence that we decided to use a very unobtrusive approach to the planned ceremony. We will have no smudge, no bowls, no cauldrons, no incense, no crystals... few if any of the trappings of ritual as this place is in itself a living breathing entity. We felt to go in smudging and “crystalling” would disrespect the energies who reside there and may not be used to human contact. Having to spend time considering what to bring allows you to invest your time and energy in tuning in to honouring the environment.

Creation of a temporary shrine from forest materials, rose petals, primrose and daffodil flowers scattered on the ground, mead and honey mixed with Tara well water poured by each in blessing. Crusty bread, broken from a long loaf, shared with woodland creatures and spirits. An expression of our appreciation and thanks to the woodland and all its inhabitants.

from Twilight of the Celtic Gods by David Clarke with Andy Roberts.

Certain special stones have been venerated from time immemorial by farmers and residents in the Penine foothills. One informant in the High Peak knows of several stones which are not necessarily ancient but appear to have been left alone by farmers...

Stones such as these may have been regarded in some areas as being the dwelling places of gods or guardian spirits of the land – genus loci – who may have required offerings or propition to ensure their power to fertilize the earth or heal the sick continued. Offerings to standing stones were often in the form of flowers or food, and sometimes sacrifices.

In times past only stone altars could be consecrated. Thus, if there was a wooden altar, in some Roman Catholic churches there was an embedded stone panel that contained hidden treasure, the relics of saints and martyrs. An altar stone was a solid, flat piece of natural stone which contained relics of at least two saints — one a martyr — as well as incense grains representing an offering to God. The stones had to be large enough to hold a chalice and sacred host, and on average were nine inches square. Five crosses engraved on the top signifed the five wounds of Christ.

We are familiar with the icons of the Christian church, paricularly those connected to the Eastern Church. Paintings on wood or worked metal, they are placed in Churches enhancing the sacredness of a particular area of the building, providing a space for private intentions and prayers.

An icon corner is normally oriented to face east. It is often located in a corner to eliminate worldly distractions and allow prayer to be more concentrated.

Here is where the icons that the family owns should be located, normally including at least icons of Christ, the Theotokos, and the Patron Saint(s) of the family.

An oil lamp normally hangs in front of the icons. The careful trimming of the lamp to keep it burning at all times is interpreted as symbolic of the attentive daily care faithful Christians should take over their souls.

Relics of saints (if the family possesses any) and a Gospel Book and a blessing cross would be kept there, as well as incense, holy water, palms and pussywillow from Palm Sunday, candles from Pascha (Easter), and other sacred items, as well as a personal Commemoration Book (containing the names of family and loved ones, both living and departed, to be remembered in prayer).

Ideally, the icon corner is located so that it is visible when one first enters the house from the main entrance. Traditionally, when first entering the house, an Orthodox Christian would venerate the icons before greeting the members of the house.

The icon corner, or red corner, (Greek: εικονοστάσι and Russian: Кра́сный у́гол - Krásnyj úgol - meaning red, bright-shining, or beautiful corner) is a small worship space prepared in the homes of Eastern Orthodox and Greek-Catholic Christians. The analogous concept in Western Christianity is the home altar.

In classical Roman religion, a genius loci was the protective spirit of a place. It was often depicted in religious iconography as a figure holding attributes such as a cornucopia, patera (libation bowl) or snake. In Pompeii one of the most famous of the luxurious residences (domus) is the House of the Vettii, preserved like the rest of the Roman city by the eruption of Vesuvius in 79 AD. 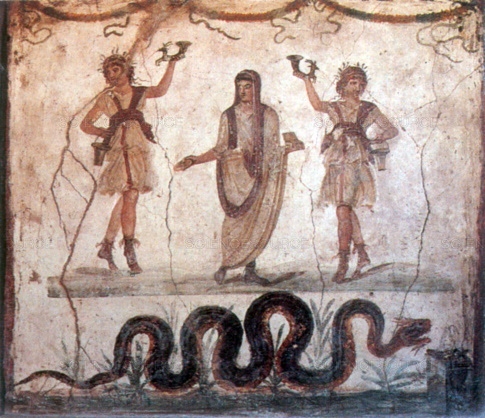 Painting of serpent, (Agathodemone), garlands and three figures. The household gods (Lares) are either side of the guardian spirit (genius loci) of the house. In the center stands the Genius, young and unbearded. On each side of him stands a wreathed Lar, holding rhyton and situla. The lower end of each rhyton has the form of a fore-part of a goat. In the lower zone of the same panel a crested and bearded serpent with brown back and yellow belly glides through plants towards the altar. This painted square altar is shown at the right edge of the panel. On the altar are an egg and some fruits. Across the top of the panel are three garlands.

There are many variations of foods, drinks and other offerings according to the tradition of those creating a Spirit Plate. However, most indigenous peoples seem to recognise that it is good to offer local spirits nourishment in the form of shared food. We are sharing the nourishment of life. 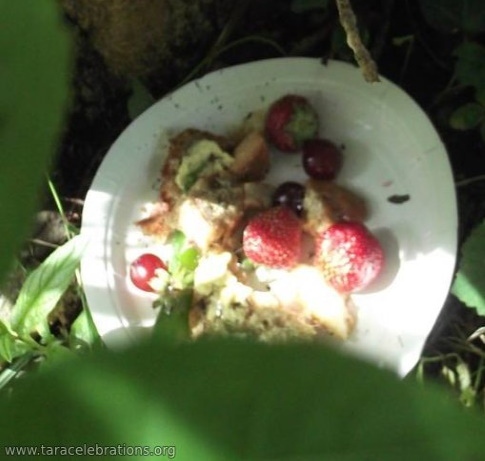 Some may prepare a plate (which may just be a leaf) each time they eat, others make an offering when they are 'in ceremony'. Whatever you feel is appropriate will be perfect. You may wish to include anestors in with the intentions, to give thanks for their lives.

This offering is always placed on the ground and usually in a notable place, such as beside the trunk of a tree. When you have placed the plate (or leaf) on the ground speak or silently pray you thanks, again whatever works best for you or the circumstances... all messages will be heard.

Other articles on the Genus Loci include Colour, Holly and Crows.... read more here....