Things we have found that do not work well - lighting candles on a windy hill!

The Druids obviously used magic but we have found that in all but the calmest of conditions lighting candles in a group setting is troublesome..... even with candles in jars. 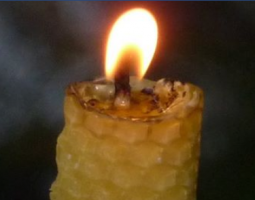 Sheets of beeswax, which can be easily rolled into a candle, are available to buy online. You can also obtain pre-waxed candle wicks, treated to burn easily.

They are ideal as a craft for a ceremony if you want each participant to invoke their own intentions.

Sharing a candle to bless each individual with light of Brigit, goddess of fire, to invoke the fire in our lives and in our land, using whatever blessing came to mind such as:

“May the fire of Brigit light your way...

May the fire of Brigit warm your heart...

May the light of Brigit inspire your mind" 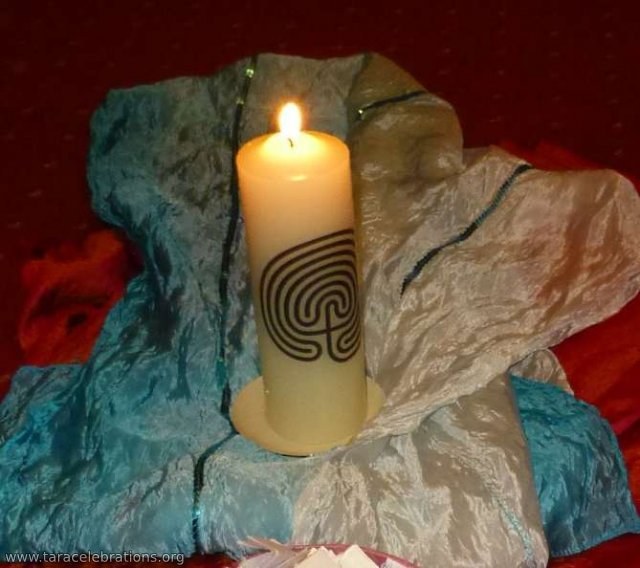 As we evolve and flow with life's changes we are often working with transitions in ceremony and meditation.

Eileen decorated this candle with a labyrinth symbol in January 2013 when the Meditations moved venue from An Tobar, Ardbraccan, to Hill of Tara.

The Labyrinth is a feature in the grounds of An Tobar and also set into the floor of one of the rooms we used for meditations.

We lit it at the beginning of our last night at Ardbraccan then intentionally extinguished the light at the end of the evening.

When we met again at Tara we re-lit the candle and let it burn during the evening meeting.

The intentions expressed were that, whilst we acknowledged the changes, we also wanted to maintain a continuity of general goals and aims for the event.

3 purple ones, a pink one and a white one in the centre.

The 4 coloured candles represent: Hope, Peace, Joy and Love and one candle is lit each week of Advent...

with the final centre candle being lit on Christmas Day (or Winter Solstice Day if one prefers).

The greenery was collected from beside the River Tolka, just a short walk from his home in Dublin.

6th January. A rush candle, made by soaking seasoned rushes (which were peeled first) in a candle-pan of melted tallow (the tallow was purchased in shops) was made one for each person in the house. The candles were lighted together and as they wore out they showed the order of the deaths of the owners.

This must have been written by an optimist as, after the sombre tone... read on to the last line!

The twelfth night is a feast night, it falls on the 6th of January. It is the twelfth night after Christmas day. On that night after the supper people light twelve candles. A few days before that night the people go out and gather rushes and let them season on the hob. On the twelfth night we pare them and dip them in grease. We then write out twelve names on twelve bits of paper. We then put the rushes in a cake of cow dung. The
candle that dies the first person will be the first to die. The rosary is usually said on that night. That night it was called "Little Christmas" long ago. Some people buy candles in the shops yet. If two candles go out together, they will be buried together. Everyone has great fun on that night.

and what of the cow dung?

This "cake" was not thrown out. It was carefully stored away in a corner of the house near the fire and it was said there was a "cure" in it for some ailments.

Marta created these lights by cleaning old food cans and poking holes in them. A pretty effect for in or outdoors.