Note: Refer to arrangements announced for each Celebration.

Samhain is the dark start of the new yearly cycle.

Celebrations at this time in the annual cycle initiate the season of Samhain (Winter time) which is ruled by the Cailleach form of the Feminine energy. She rules winter from 1st November to 1st May when the young Brighde takes over and rules the summer months. There are tales of the Sliabh na Caileach in Co. Meath, Ireland, which were made when the caileach dropped stones from her apron. Read more here.... 25th March is Latha naCailliche (Day of the Old Woman) in Scottish lore.

This is the energy that brings death to all those outmoded ideas, and ways of living that no longer serve us. The Cailleach energy prepares us for rebirth and new life when the winter time is over.

The Samhain themes coming up in mythology are centred around the ancestral spirits, the Cailleach and Fire. The spirits were seen as real and during the Samhain season it was believed that the veil between worlds was thin and their influence was regarded as more perceptible. For this reason, it was customary to leave out some food and strong drink for the spirits on this night.

Jack O' Lanterns originated in Ireland and consisted of a turnip carved into a head with a candle inside.

When the Irish went to the States they found pumpkins easier to carve, so the tradition continues.

The skull is a dominant symbol of Death at this time of year as we celebrate our ancestors. Below is a green glowing skull, called Merlin, from a celebration at Dowth in 2009 and the Mitchell Hedges skull which some of us visited when it was in Glasgow in 2007. 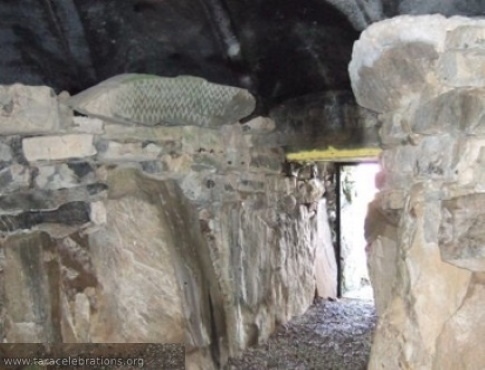 Return of the Salmon

The Salmon return to the River Boyne in Meath at this time of year.

Return of the Salmon festivals are particularly celebrated along the Pacific North East coast and it is interesting to wonder if our ancestors also had a similar festival which we have now lost.

It has been suggested by some that the stone on the left in Fourknocks has a resemblance to salmon skin.

In this youtube video by Meath Chronicle they are leaping the weir at Slane, on their journey back to the spawning streams. They wait in the river between Drogheda and Slane for heavy rainfall, the extra flow of water helping them on their way over the weirs between there and Navan.

When Winter comes most hill farmers take their cattle off the high ground and place them in sheds until Spring.

Geology allows them to do things a little differently on the Burren. In County Clare on the west coast of Ireland, the Burren is a flower-rich limestone plateau. In Summer the rock absorbs the heat and, like a giant night storage heater, it radiates the warmth out in the Winter. That makes life pretty agreeable for the region’s beef cattle.

Each year the season to move the cattle is marked by a festival. The local priest sprinkles holy water on their coats and a chosen farmer walks his pregnant cows up the green road to the mountain grazing, followed by hundreds of locals and tourists eager to see the delighted leaping of the cattle as they reach the fresh grazing of their Winter home.

Written by Anne Newman 12th November 2019 - A day to remember the dead. A day to celebrate the ancestors. Read more here.

Anne Newman shared her thoughts on the ebb and flow of the sun's apparent strength throughout the year. End of Summertime - energies of darkness and light

Marta shared a rune that gave insight into how we can respond to bereavement. Inspirational Writing - There is a place for memories, but there is also a place in the here and now - Samhain 2019.

In 2018 Nora J focussed on the Aes Sidhe as Genus Loci. Dawn and dusk, Bealtaine Eve and Samhain Eve are particular times when the 'veil' between the realms is 'thin' and the otherworld beings are visible. Aes Sidhe

Site of the first Halloween Bonfire? Hill of Ward aka Tlachtga

they found evidence of intense burning, likely to have been caused by a huge bonfire ...

In Fourknocks we bend low, entering into the darkened chamber, and are aware of this transition from the outer physical 'busy' world into the inner quiet protective space.

Celebrate our celestial connections - observed by many cultures around the world the Pleiades act as celestial time keepers as much as the sun is our solar marker of the seasons.