Memories from Anne, Bernadette and Pat who recorded the day. All joined together by a description from Pat....

13 of us (14 if you include the resident dog, Jake!) met at Bective Mill on a beautiful day to celebrate the Spring Equinox 2019. 13 was a great turnout considering there were a few absent regulars. 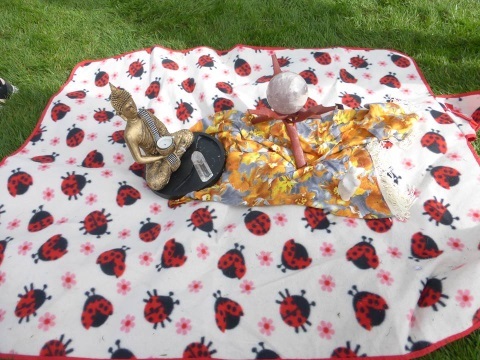 From our community in Ireland there was an Italian woman from Belfast, an Asian woman from Navan, a Lithuanian woman from Dublin, some returning folk, some "newbies" - ALL WOMEN - and ONE handsome dude from Dublin (guess who?) made for a dynamic, vibrant day. I genuinely don't think anyone noticed I was the only guy there until I pointed it out - which is kinda cool.

After initial introductions and chat, we formed a circle by the banks of the River Boyne and enjoyed a meditation led by Bernadette. To the music of the river, the breeze and the birds of Spring, we were led on a wonderful journey which stayed true to the theme of our day, "Emergence".

Enjoy the sounds of the River Boyne in this video shared by Anne.....

After this, we went indoors to the Mill itself where we regularly meet on Monday nights for our meditation / healing circle. There, we held an "OpenHeart" session where we discussed many issues which each felt were important to them on this day.

A Healing Circle followed, then we said our 'goodbyes' before heading our separate ways - united in "Emergence", Healing and Love.

It was great to feel the new energy of different folk there, some regulars, some attending their first Celebration with us and some welcome old friends who we hadn't seen in a while. All contributed in their own way and it is hoped all got something out of the day.

Of course Mother Nature didn't let us down making a magnificent appearance as she always does at this time of year. From the rushing River, to the budding trees, the newly-emerged flowers to the newly-cut grass, we were surrounded by reminders of what Spring Equinox is all about in nature.

We were also reminded what it is about for us personally too - planting seeds of ideas, getting rid of the Negative and welcoming in the Positive.

Some commented about the day that they "really needed that", while others will surely discover that we ALL "really need" to spend time in Nature among friends from time to time.

Until Bealtaine... Blessings to all and may the seeds of your dreams planted now bear fruit in the coming year.

We held Monday meditations in the Mill building until a fire destroyed the inside rooms in 2019. The Bed and Breakfast building was untouched and is still operating as an enjoyable place to rest up beside the River Boyne, dependent on current government restrictions due to Covid-19.