Thanks to Anne N for this video of the crows on Hill of Tara in 2021. 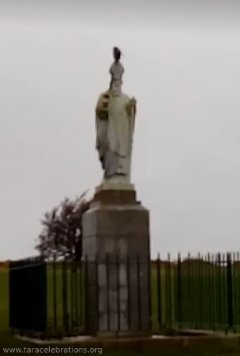 At a Tara Celebrations get-together, or when we visit Tara on our own, one particular bird often shows up.... and appears to join in with us....

Quotes taken from our archives of pre 2018 celebrations

Samhain 2008 - Tara.
The black crows circled as we circled... and summer turned to winter in the season of samhain...

Imbolc 2015 - Bective.
Planting the Seeds of our Dreams with Danu - one among us had a vision involving a large multi-petalled crystal, a fox and a crow in the middle of our circle. The fox of course has long been associated with St Bridget.

Bealtaine 2012 – Bective.
We started in the Cloisters but realised our presence was disturbing the crows giving their chicks their last evening feed, so moved outside to the Church ruins.

Summer solstice 2010 – Tara.
Crow joined us watching the sun disappear into the west. 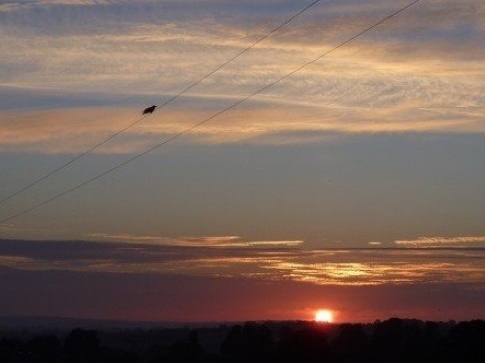 Lughnasadh 2014 – Tara.
The introduction on the hill started with talking about coming to Tara and a great big crow circled around us. At the words, 'land on the ground' he did. Right on the word ground! This has happened before at get togethers on Tara. The crows certainly like to 'check us out' and join in.

Through the seasons the resident crows at Tara and Bective watch. It could be said they protect and guard as a genus loci – as a manifestation of the spirit of place. Both places are graveyards and this link to death is a common thread when we read about crows.

Why Crows and death? Crows are omnivorous, and will eat anything including carrion or by stealing freshly killed birds and mammals from other animals. Undoubtedly in the days when our ancestors had many clan battles and inter-family fights, the crows would have gathered to take advantage of the dead bodies laid out. There was also the practice of sky-burial, when a body would be left exposed for the birds and animals to remove the flesh from the bones before funeral rites.

A note in the Talmud (the source text of Jewish law) relates how the first graveyard came to be founded:

Adam and Eve were mourning the death of their son, Abel. Yet they did not know what to do with his corpse. A kindly crow saw their grief and how distressed they were and decided to show them what was to be done. It killed another crow, pecked at the ground with it's strong black beak, made a hole, put the dead crow in it, and covered it up. Thus the crow taught us how to create and use a graveyard.

In the Hindu ritual of Shradh families feed crows who represent deceased relatives.

According to Garuda Purana texts, thirteen days after death a soul starts it's journey to Yamapuri and it takes seventeen days to reach there. For another eleven months the soul travels through the land of Yamapuri and finally, in the twelfth month, it reaches the Court of Yamaraj, God of Death. Here the god judges the soul's life and whether or how long it should stay in Hell. Virtuous beings are taken directly to Svarga (heaven).

During the period of eleven months the soul has no access to food and water. However, the family can help satisfy the hunger and thirst of the soul during its journey by following the steps in the Shradh ceremony:

Pindadan is the offering of rice, cow’s milk, ghee, sugar and honey.

Tarpan is the offering of water mixed with black sesame, barley, Kusha grass and white flours.

Irish mythology abounds in riddles and complexities. The Goddess of War is usually depicted, like so many other Irish deities, as having three aspects, being three sisters, collectively called the three Morrígna or the Morrigan. Depending on the source material these are usually cited as Badb, Macha and Nemhain or Badb, Macha and Anand (Ánu).

(note - A royston or squall-crow are old English names for a hooded crow. Badb catha translates as battle crow)

Badb as a "bean-sidhe, a female fairy, phantom, or spectre, supposed to be attached to certain families, and to appear sometimes in the form of squall-crows, or royston-crows"...

The Morrigan mythology focusses on battles and sovereignty. She foretells and oversees war and death, and speaks of the battlefield as ‘her garden’. The goddess would often fly above a battle, calling to the warriors to be courageous, whilst simultaneously striking fear into the hearts of the enemy. Sometimes she would join in the battle in her human form.

Legend tells how Macha, being Nuada’s wife, fought beside him in the Battles of Moytura. The Morrigan flew overhead in crow form, casting spells and causing a poisonous fog and rains of fire and blood upon the heads of the enemy.

Following the defeat of the Formorians by the Tuatha Dé Danann in the Second Battle of Mag Tuired, Badb instead of predicting doom, now sings a prophecy celebrating the victory and a time of peace:

Peace to sky. Sky to earth. Earth under sky, strength in each, a cup full, full of honey, mead in plenty. ….

Mast on branches, branches heavy, heavy with fruit, wealth for a son, a gifted son, strong neck of bull, a bull for a poem, a knot on a tree, wood for fire. ….

“What news have you?” Peace to the sky, life and land everlasting. Peace.

But then the gloom returns and she delivers a prophecy of the eventual end of the world,

… foretelling every evil that would be therein, and every disease and every vengeance.... An evil time!

One of her stories is recited in the Tain Bó Cuailnge, Queen Medbh’s famous Cattle Raid of Cooley, where the Morrigan shapeshifts into the form of an eel, a wolf and a cow, as well as her more usual crow. She joins the hero Cúchullain, showing him an omen of his own death. This is confirmed when, mortally wounded, he ties himself to a standing stone so that he can die on his feet. She alights on his shoulder in her crow form to show his enemies he is dead. The impressive stone still stands near Knockbridge in County Louth. 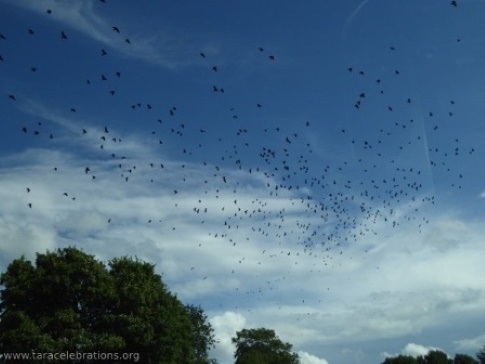 How do crows become connected to specific places?

This photo of crows moving in a flock is taken between Dalgan Park and Hill of Tara.

Once at dusk, standing with a friend on the Slane hillside, she said:

'I used to stand here with my grandfather, and we would watch the crows fly up from the River Boyne to their roosts. And he had watched them with his grandfather. They must have been doing this same nightly journey for hundreds of years.'

Like many other species of birds, crows and ravens usually spend the night together in what is called communal roosting. Groups of related and unrelated individuals flock to a particular location for, in part, the security of safety in numbers while they sleep. Crows can gather in the tens, even hundreds of thousands when they do this.

It seems that crows do become attached to particular places. They have been found to have regional dialects which they may alter if moving district, and two different populations of crows may have slight differences in their cries and caws.

Ornithologist John M. Marzluff and author Tony Angell noted in their 2005 book In the Company of Crows and Ravens, the calls these birds use:

"vary regionally, like human dialects that can vary from valley to valley."

"When crows join a new flock, they learn the flock's dialect by mimicking the calls of dominant flock members."

Crows are also known for their intelligence.

In this locality crows build their nests on very high trees. She lays from two to three eggs. The crow sits on her eggs for three weeks, then the young ones are out of the shell.

The old people tell us a strange tale about the wisdom of crows. On a large oak tree in the lawn near the Arglen church a number of crows had built their nests. On a certain day they seemed to hold a meeting. Local people were surprised to see the crows taking all their nests from that tree and building on another tree.

A storm arose during the night and the tree from which they had removed their nests was blown down. It is hard to explain how the crows knew what was going to happen.

Thus we find places strongly linked to crows with names such as :

Prehen (possibly from Irish: Preachan, meaning "The place of the crows") a small townland outside Derry, Northern Ireland.

Crow Island (Illaunaphreaghaun) or Oileán a’ Phríocháin near Kilcummin in Galway.

Boa Island is said to be named after Badhbh (Badb). Needless to say there is a famous graveyard there.

Near Newgrange in Meath there are two low hills known as Dá Chich na Mórrigna (the breasts of the Morrigan). 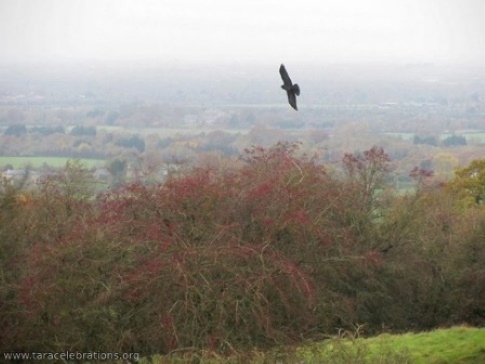 We connect to the genus loci, spirit of place, soul of place, by becoming familiar with the land and the beings that live there. We gain a closer link to the cycles of the seasons, we learn from the local legends, we benefit our own spiritual experience, and the day-to-day becomes magical.

Every continent has its own great spirit of place.

Every people is polarized in some particular locality, which is home, the homeland.

But the spirit of place is a great reality.

Other articles on the Genus Loci are Colour, Cuilenn - Holly, Aes Sidhe