Site of the first Halloween Bonfire? Hill of Ward aka Tlachtga 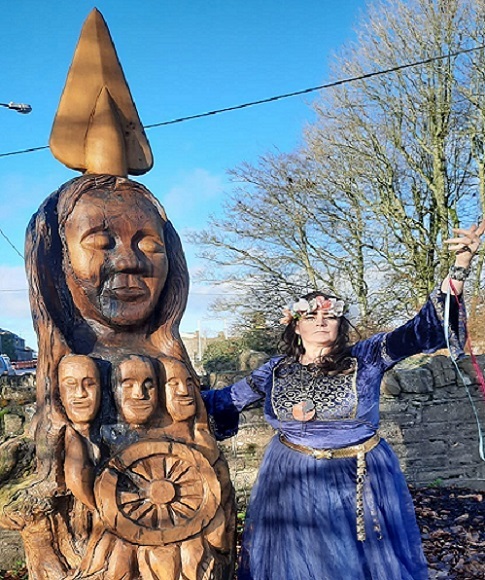 Tlachtga, aka Earth Spear, with her symbols of three sons, wheel and fire. facebook.com/people/Tlachtga-Abhaile for more information

During a three year archaeological dig at the Hill - ending 2016 - they found evidence of intense burning, likely to have been caused by a huge bonfire dating to around AD 500. This may or may not be part of a Samhain / 'Halloween' celebration but confirms that this was a place of fire.

Dr Steve Davis of University College Dublin, part of the team of archaeologists working on the Hill of Ward, said: “This is a massive ceremonial enclosure. The location of it is striking with nearly 360 degree views around it, right in the heart of a major monumental landscape.”

It is very similar in appearance to the great ditch of Rath na Ríg on the Hill of Tara. Dug into the bedrock but quite shallow it contained burnt charcoal and animal bones.

A local family and the local community usually organised a Samhain Festival at the site for no financial gain and open to all.

This became popular, with several thousand attending, and thus the possibility for a larger, more commercial and theatrical event arose, and the organisation was taken over by Meath Council and other interested parties.

Hill of Ward - aka Tlachtga

Tlachtga, nr Athboy, in Co. Meath is about 12 miles from the Hill of Tara, which is easily picked out near the horizon and vice versa.

Named after a legendary goddess, this is the location of the birth of Tlachtga's three sons (Dorb, Cuma and Muacth) and where she died and is buried.

It was a time of remembrance for the ancestors and those recently passed. It is said that the renewal fire for the year would be lit at Tlachtga, and being visible for miles around, especially Tara, and would herald the start of the celebrations.

A general article by the BBC can be read here - Hill of Ward: Did Halloween begin on 'magical' ancient site?