Hill of Tara and Teltown 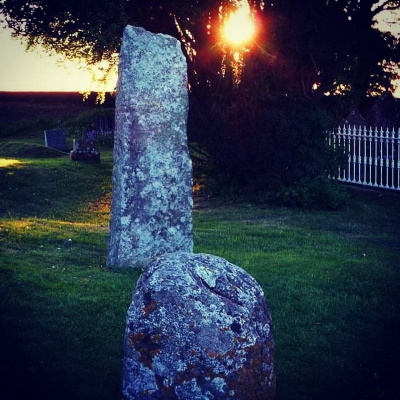 This photo was taken in the churchyard on the Hill of Tara as I walked through a few summers ago.

It was the 7th of June 2013. The sun peeped out through the trees and I was very happy to have my camera with me.

There is so much beauty around us in the land. For myself lately I found I have not been going there much and it is much needed. Getting out in nature is a natural healer, that's the magic in it.

I love to go with my grand-kids. They have no limits to their imagination, so a trip is much needed over the next coming week.

Where do you love to connect to the land?

Get out and feel and see the magic of our beautiful planet.

Blessings to all, Bernadette Mac

One aspect of the Magic of the Land is rebirth. The crows are rebuilding their nests in the churchyard and there are changes at Maguire's cafe / shop with new outside pods added to the main building.

Rare moments and the magic of the land

Hill of Tara moments and donkeys at Teltown who helped out at a Lughnasadh celebration.

Great company in past events and lots of fun.

Step into a place that makes you see, feel and smell the magic in the air.

The beauty all around and the smell of turf burning and the different types of evergreen trees.

The fresh air on your face and the magical colours of a sunset on a frosty evening.

Welcoming the warmth of a homely fire.

Connect to the magic of the land.

It's a great feeling of belonging and healing.

Read more on the monuments and a general map here

Navan Historical Society page on Tara - included is an excellent explanation of the word Bóthar - a type of road. Go to the link to discover the King's question after the response:

The King asked his lawyers one day on Tara why the Bóthar was measured as the length of one cow and the breadth of a second cow, and the lawyers answered; " A cow using a bóthar must have enough room to turn around and look at her calf trotting at her heels "

Link here to Samhain at Tara and Tara at Christmas

Tara - Temair in Gaeilge - is a unique heritage site maintained by the State OPW department. Open to the public 24/7, with a visitor centre in the decommissioned church open in the summer. There is a cafe with gift shop (Maguires), a small book shop and art gallery, and toilets. Parking is free but can get very congested in small car parks or on the roadside. Busy and noisy with tourists, there are places where one can be alone, in the western woodlands, and furthest ends of the grassland ridge. Magnificent distant views over the central plain of Ireland, with Loughcrew in the northwest, Dublin in the east and the white stone fronted Newgrange often sunlit and visible in the north east. Many are drawn to experience the changing energies at sunrise and sunset, the sky wide and expansive above your head. At night the moon hangs low over the Mound of the Hostages, the Milky Way aligns with the Banqueting Hall and The Plough circles overhead.

Arriving on the bus or driving up from the Gabhra valley The Hill appears as a ridge, just another roll in the landscape, apparently insignificant in the rise and fall of the surrounding countryside.

Yet, if you hear a call, a desire, a gut feeling, you will follow in the footsteps of our ancestors, climb the gentle hill and discover what you came for. Whatever we hold within ourselves Tara will enlarge, enhance, embolden and clarify. Tara has a child-like quality, no agenda, and will weaken or strengthen you. It will greet you with open arms or push you away for no apparent reason. But it is probable that you will leave knowing that you have had 'an experience', accepted or rejected.

The energies are often seen as yellow and maybe it is no coincidence that part of the area is known as Castleboy (boy = bui = yellow). Yellow, the colour of the 3rd chakra, the solar plexus, your 'will-power'.

A prayer for Tara

May the rain fall softly on your fields and the sun shine warmly on your stones. May you always have a friend at your back. May you have wise and articulate council to carry your voice. May you have a community that love, support and value you. May you go forward with a sense of hope and enthusiasm. May your essence live here as long as you wish. May the aurora light your starry filled night skies. May you always be alluringly beautiful. May all peoples find succour from your rounded breasts. May you continue to nourish the world and may the world be nourished by you.

Above: River Blackwater at Teltown House

Place where the Tuatha de Danann lost a battle with the Milesians and they were forced underground.

According to the Senchas na Relec in Lebor na Huidhre it was one of the chieftain burial places.

"The Annals of Ulster in the year AD 749 report that ships were seen in the air (some said above the monastery of Clonmacnois). Other sources report a similar episode at Teltown, during the reign of Congalach mac Maele Mithig (d. AD 956), when a ship appeared in the air above a market fair (oenach) and a member of the crew cast a spear down at a salmon below.

When he came down to retrieve the spear a man on the ground took hold of him, whereupon the man from above said:

Congalach ordered that the man be released and he scurried back up to his shipmates,

'who were all that time looking down, and were laughing together.'

Well they might. There is no point in trying to explore the Otherworld with the apparatus and outlook of the science laboratory: flying ships are not subject to the laws of quantum mechanics."

- built on old earthwork, founded by St Patrick. There is said to be a passage from Rath Airthir (Eastern Fort) to the church, a vast treasure in the crypt of church. Men and women looking for the fortune follow a piper and never return.

- several artificial lakes are in the area

- at entrance to Teltown House – Leary's Hole. St Patrick is said to have condemned King Laoghaire to remain in it until Judgement day. It is also said to be the entrance to Hell.

– deep long rectangular cleft sometimes recognised as a marriage site, although this could have been at the more circular hollow lower on the hillside.

References for the text - LeborGabala, Dindshenchas, Annals of Four Masters

Set among three hundred acres of rich pasture land in the heart of the Boyne yet just 55 minutes from Dublin Airport. and only a short drive from the towns of Navan, Kells and Slane, Bertie and Renée Clarke’s lovely creeper-covered 17th century country house overlooks the River Blackwater Valley.