Thanks to Anne for this article written 31st January 2019. In 2021 NJ added to it with information on other Brigid's Wells. 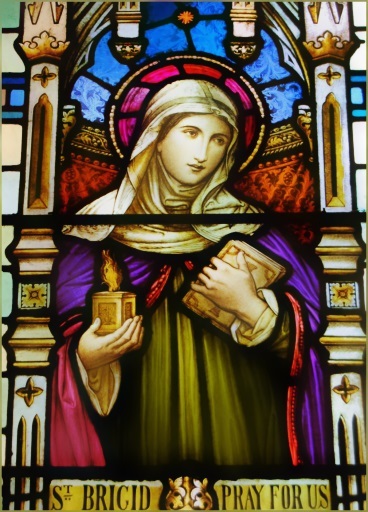 Remember to put a Brat Bríd out on Bridget’s Eve, 31st January.

The Brat Bríd - a piece of cloth - is placed on a window sill, fence or tree branch on the 31st January (the night before St. Brigid’s day) and left overnight. The belief was that during the night St. Bridget would bless the cloth. This cloth would be used for healing and fertility and throughout the year.

Different parts of the country on the tradition have different colours. It can be either white, blue or red. I have both a red and white one I put out. The main thing is that it's a piece of cloth. Some people put out ribbons or strips of cloth.

This cloth would be used for fertility and for curing illness throughout the year.

Bridget wanders over the land during the night, offering her fertility and the energy to birth a new Spring. Everything she touches will be blessed and in the early morning we see evidence of that blessing as Bridget’s Day Dew or Frost.

Another Bridget’s Eve custom - all of the family made special crosses in honour of the saint. The Bridget’s crosses were hung over the doorway to ensure protection of the household, farm and land against fire, storm and illness.

In some parts of Connacht, people would carry a large straw belt (a Crios Bríde) which was placed in the doorway and people would pass through it while saying a prayer to St. Bridget, in the hope of gaining her protection from illness during the coming year. The crios bride or Bridget’s Girdle is a straw rope with a number of crosses plaited in straw attached to it.

I remember reading that there were different ways for men and women to pass through the cross. I’ll see if I can find that info and add it to this. Update in 2020. Seamus Heaney has a poem in the ollection 'Crossings':

On St. Brigid's Day the new life could be entered
By going through her girdle of straw rope.
The proper way for men was right leg first
Then right arm and right shoulder, head, then left
Shoulder, arm and leg.
Women drew it down
Over the body and stepped out of it.
The open they came into by these moves
Stood opener, hoops came off the world.
They could feel the February air
Still soft above their heads and imagine.
The limp rope fray and flare like wind-born gleanings
Or an unhindered goldfinch over ploughland.

A Hebridean House Blessing chant March 27, 2011 from: The Sun Dances : Prayers and Blessings from the Gaelic, Alexander Carmichael

May Brigit give blessing to the house that is here…
Brigit, the fair and tender, her hue like the cotton grass.

One of the central celebrations to Là Fhèill Brìghde is the making of the brìdeag or dealbh Brìde – the ‘Little Brìde’, or ‘icon of Brìde’ as it is called in Scotland, or the brídeóg as it called in Ireland. The brìdeag or brídeóg was usually made by girls (although in parts of Ireland, boys also made and then paraded them), where as in Scotland, the dealbh Brìde was made by the older (married) women of the house. 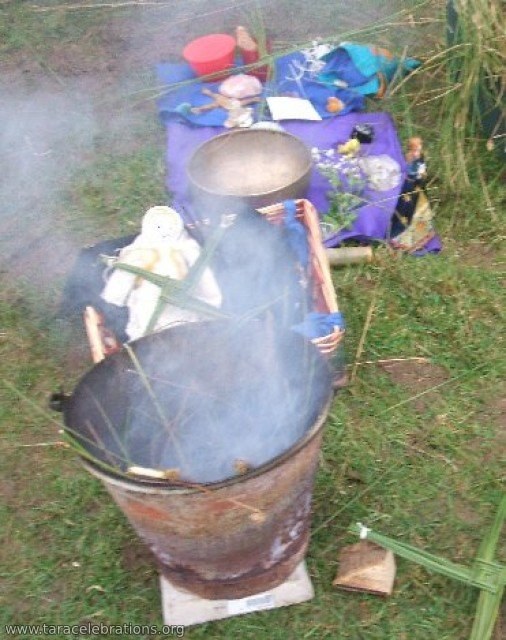 (photo taken during Imbolc ceremony 2008 - fond memories of the bucket!)

The Celtic goddess Brigid is one of the most venerated Goddesses in Ireland. The name Brigid means exalted one, and her ancient Gaelic name, Breo-Saighead, means fiery power or fiery arrow. She embodies the element of fire as she is a solar goddess and is commonly depicted with rays of light or flames coming from her head.

It is said that she was born at sunrise from the union of Dagda, the earth god, and Boann, the goddess of fertility, from the ancient tribe of Tuatha Dé Danann (people of the Goddess Danu), who practiced magic. After they lost their mysterious islands in the west, they traveled to Ireland in the misty clouds and settled there.

She is sometimes called Brigid the 'Triple Goddess', for her fires of the hearth, inspiration, and the forge. She is a powerful patroness of healing arts, fertility, poetry, music, prophecy, agriculture, and smithcraft. She is also called Goddess of the Well. The well is sacred because it stems from the womb of the earth, and Brigid is also the Earth Mother Goddess.

Her association with the sacred cow reflects the Celtic reliance on the animal for sustenance; milk was an important theme throughout the year, especially during the cold winter months when hardship threatened. As a baby, Brigid drank the milk of a sacred cow that came from the spirit world.

Worship of the Celtic goddess Brigid was widespread among Ireland, the highlands and islands of Scotland, the Isle of Man and also of Western Europe. Brigid was a unifying theme and common bond. However, in the 5th century, the goddess faced an immense wave of religious change and pressures that swept through her devotees. She had to evolve, otherwise, her followers would have to banish her from their lives.

As Christianity spread throughout the Celtic lands rather than illiminating the older relegions many properties of the older religions were Christianised. Brigid was an integral part of the lives of Celts, and the solution was to create a version of her that would fit into the Catholic religion. Hence, a new story emerged of St Brigid.

Saint Brigid was born Brigit, and shares a name with a Celtic goddess from whom many legends and folk customs are associated.

It is said that she was the daughter of Dubthach, a Leinster chieftain and Brocca who was baptized by Saint Patrick, Brocca was a slave, therefore Brigid was born into slavery. When Dubthach's wife discovered Brocca was pregnant, she was sold to a Druid landowner.

There are many stories of Brigid's childhood. One story says Brigid once gave her mother's entire store of butter, that was later replenished after Brigid prayed.

When she was about ten-years-old, Brigid was returned to her father. Her charity did not end when she left her mother, and she donated Dubthach's possessions to anyone who asked. Eventually, Dubthach became tired of her charitably nature and took her to the king of Leinster, with the intention of selling her. As he spoke to the king, Brigid gave his jewelled sword to a beggar so he could barter it for food for his family. The king was a Christian, recognized her kind heart, and convinced Dubthach to grant her freedom by saying, "Her merit before God is greater than ours."

Dubthach, who had arranged for Brigid to marry an Ulster nobleman. She refused and made a vow to always be chaste. Legend has it Brigid prayed that her beauty be taken so no one would want to marry her, and the prayer was granted. It was not until after she made her final vows that her beauty was restored.

Little is known about Saint Brigid's life after she entered the Church, but she founded a monastery in Kildare, the Church of the Oak. It was built above a pagan shrine to the Celtic goddess Brigid, which was beneath a large oak tree. She later founded a school of art that included metalwork and illumination, It was at this school that the Book of Kildare was written and illuminated, but this was lost three centuries ago.

Saint Brigid died on February 1 525. Her body was initially kept to the right of the high altar of Kildare Cathedral, with a tomb "adorned with gems and precious stones and crowns of gold and silver," but in 878, during the Viking raids, her relics were moved to Armagh and buried with Patrick and Columba.

In 1185, John de Courcy had her remains relocated in Down Cathedral.

Today, Saint Brigid's skull can be found in the Church of St. John the Baptist in Lumiar, Portugal. The tomb in which it is kept bears the inscription,

"Herein these three tombs lie the three Irish knights who brought the head of St. Brigid, Virgin, a native of Ireland, whose relic is preserved in this chapel. In memory of which, the officials of the Altar of the same Saint caused this to be done in January AD 1283."

A portion of the skull was relocated to St. Bridget's Church in Killester.

Saint Brigid's likeness is often depicted holding a reed cross, a crozier, or a lamp. In addition to her totemic animals of the cow and the ewe, she is also associated with the cockerel, the herald of the new day and the snake, symbol of regeneration.

The dandelion was known as St. Brigids flower as it is one of the first wild flowers to bloom after her festival.

The Oyster Catcher is known as Giolla Brid or Brigid's Page, a name also known in the Scottish Islands. At around this time, in years past, large wintering flocks of oystercatchers would start to disperse along the coastline, and tradition was that the time of St Brigid was at hand.

St Brigid's Well sits atop the Hill of Faughart in an old graveyard. There is an ample car park, though watch out for broken glass, this is a popular site for the 'lads' to get out of their heads and smash a few bottles when the pilgrims have gone home. Not a promising start for any visit. But it does get better. If you look south you overlook the Irish Sea and Dundalk, a great view in clear weather.

Walk into the graveyard and follow the path eastwards, to the right, near the surrounding wall. Around a corner you will find the protective beehive shaped stone capping of the well, with ribbons and objects of prayer tied onto the overhanging tree.

This water is piped downhill to the Christianised well head at the Shrine. Here there is a beautiful wood with gurgling stream, stations of the cross, and a range of healing stones. And for some the more important toilets. Again a good sized car park.

There are Irish wells dedicated to St. Brigid. Those wells were originally connected with the Celtic goddess Brigid, who is also the Goddess of the Well, from which flows life-giving waters. They flow from the womb of Mother Earth.

It was traditional to visit these either the evening before or on her feast day. Water obtained at this time, was believed to be particularly blessed.

Another custom is to visit a Well to gather healing water for the year. Water is also used to bless the Bridget’s crosses that were made either last night or today, depending on the tradition of the local area.

Many people got water from a well dedicated to Brigid and sprinkled water on their fields, livestock and homes to invoke the blessing of the saint.

I have visited many wells dedicated to Bridget over the years. The two Bridget’s wells at Kildare, St.Bridget’s Well Liscannor, St Brigids well near Mullingar (shown in the photo), St Brigid’s Well at Killare near Uisneach, Brigids well at Faughart, Co. Louth to name but a few. All are beautiful sacred places to visit. 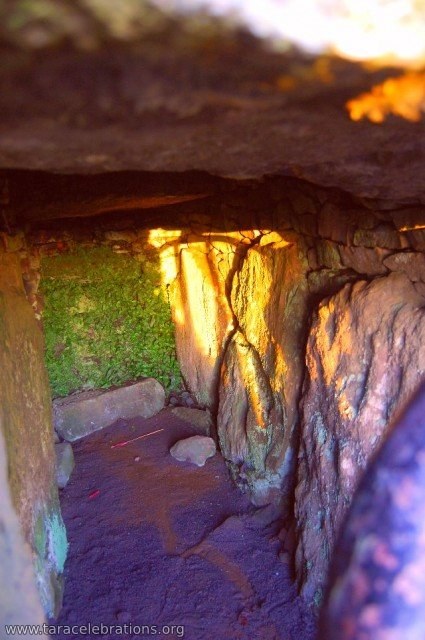 Hoar frost gathered from grass on the morning of St. Brigid's day is said to be an infallible cure for headache.

On this Day, the light from the rising sun shines into the Mound of the Hostages on the Hillof Tara. The other time it does this is at Samhain, 1st November. Interesting that these times mark the beginning and end of the growing season.

More information on these celebratory days of Imbolc - click here for Candlemas (2nd February) and click here for St.Blaise and the Blessing of the Throats.