Camille shares her experience of the festival in Louisiana...

A Brief Introduction to Carnival Season

The roots of Mardi Gras lie in the pagan fertility rites of the ancient world, but today, it is known as a Christian celebration in the time between the feasts of the Epiphany / Three Kings Day and Ash Wednesday / the Lent season before Easter.

This season is known across the world as Carnival and is celebrated particularly in places with strong Catholic heritage (usually stemming from colonization by Christian Europe), such as Brazil, Trinidad and other parts of the Caribbean, and, of course, Louisiana.

Various countries in Europe also have their versions of celebrations: many cities and villages in France, Venice has a particularly well-known Carnival, and as far east as Lithuania, whose Užgavėnės festival has many parallels with the original, medieval celebrations. Traditions differ, but all share the need to wear masks, to promenade/parade, to consume in abundance, and to get into the festive mood.

In ancient times, the time-period between the height of winter and the start of spring was a time where communal gatherings were more frequent, as people had to spend less time working in the fields. Typically, fertility gods would be honored at this time as a way to ensure abundance in the coming seasons.

When the holiday was Christianized along with many other pagan holidays that take place around this time of year, the central theme became, quite literally carne vale (“farewell to meat”), forever defining the season as a celebratory time of abundance (and meat, in a literal and metaphoric way, (i.e. sins of the flesh) before the solemn season of Lent began.

This period is known as Carnival or Shrovetide and culminates in Mardi Gras (“Fat Tuesday”), which is the day before Ash Wednesday. Thus, in both the pagan and the Christian interpretation, Carnival / Mardi Gras / Shrovetide is a time in between seasons. This is often interpreted, as in the Lithuanian tradition, as a fight between two kings, the gluttonous king of winter and the nimble king of spring.

While the most popular celebration of this festival takes place in Rio de Janeiro, it is safe to say that the most well-known and beloved of these celebrations is in New Orleans, Louisiana. A little-known fact, however, is that there are actually two ‘genres’ of Mardi Gras in Louisiana (urban and rural), each with their own rites and rituals.

The Acadians, also called Cajuns, were French migrants to Canada in the seventeenth-eighteenth centuries who were forced to move to the land around the Mississippi during the Great Expulsion after the French and British signed the Treaty of Paris (1763). An agricultural and peaceful people, the Cajuns have developed a unique and vibrant culture in South East Louisiana where many Cajuns still live. They speak their own dialect, Cajun French, have a diverse range of music and food traditions, and, have their own version of the Mardi Gras tradition, centering around the Courir de Mardi Gras (Fat Tuesday Run).

The origins of the Courir de Mardi Gras lie in rural medieval France, reflective of the larger Catholic medieval culture of Europe. Thus, it is similar to the Shrovetide traditions of many European countries to this day. In medieval times, the period between Christmas and Easter was a time when begging from door to door was both socially acceptable and encouraged, as it was considered bad luck and bad religion to turn a guest away during the hardest part of the year. Masked revelers would go from house to house collecting presents, singing special songs, and giving blessings (or curses if refused). There were also many contests and divination practices during this time of the year. Interestingly enough, the tune of La Vieille Chanson de Mardi Gras is based on a Celtic song originating in Brittany, and the melodic parallels are easily heard!

In modern-day Cajun country, the main courirs happen in Mamou and Eunice. People of all ages dress up in traditional costumes and gather for the festivities, which always include every kind of Cajun dish imaginable (boudin, cracklins, jambalaya, cochon du lait), a fais-do-do (dance), and a parade. Mardi Gras day consists of modern-day masked revelers ‘begging’ from house to house, collecting up as many ingredients as possible for the communal gumbo that will be cooked later, and singing the Chanson and other tunes as a thank you. They often dance on the backs of their horses and give a great performance for the whole crowd that has gathered.

A traditional Cajun gumbo is somewhat similar to a stew and is usually served with rice. There are two types, seafood and chicken-and-sausage, but for the rural Cajuns (as opposed to the Bayou Cajuns—which is where my heritage lies) it’s nearly always chicken-and-sausage. After the majority of the ingredients have been gathered for the community pot, the capitaine of the Mardi Gras leads costumed participants on horseback or on foot (but a recent tradition is doing it in trucks or trailers) and releases the chicken(s) in the air, the only rule being that no chicken gets away. Once the chicken has been caught and returned to the capitaine, the fais-do-do commences, and joie de vivre (joy of life) permeates the countryside.

Below are two pictures from the Cajun Mardi Gras featuring my parents and their “real Cajun” friend Bernie in the traditional colorful and fringed costumes and hats.

The first organized Mardi Gras celebration was actually held in Mobile, Alabama in 1702. After New Orleans was founded in 1718, small-scale Mardi Gras festivities (i.e., masquerade balls and thrown by elite secret societies called ‘Krewes’) began but were suppressed under Spanish (1762-1800) and early U.S. (1803-) rule. Little could stop them from laissez les bon temps rouler (letting the good times roll!), and by 1837, the first recorded Mardi Gras street parade was held, but the Mardi Gras system that remains in place today came about several years later with the development of Krewe-based parades.

The first Krewe (secret society consisting of only rich white males) to pay for and “throw” their own parade and ball was the Mistick Krewe of Comus in 1857, soon followed by the Krewe of Rex, the Knights of Momus, and the Krewe of Proteus. Women and people of color soon formed their own Krewes, such as Muses (all-women) and the Zulu Social Aid and Pleasure Club, which, along with Rex, is now the most famous parade of Mardi Gras—famous for throwing decorated coconuts, which are quite the treasure to any local!

Additionally, black people began the tradition of the Mardi Gras Indians over one hundred years ago. A great video about this tradition, a cornerstone of Mardi Gras, can be found on YouTube at this link: https://www.youtube.com/watch?v=c9Fg670q_FU 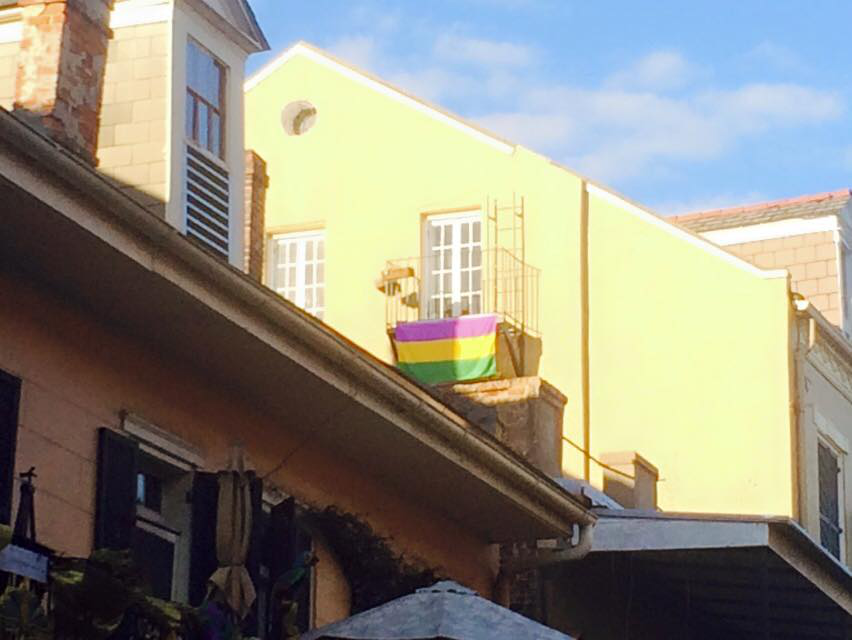 The colors of Mardi Gras in New Orleans are purple, green, and gold, were established by the Krewe of Rex in 1872, and have remained since. The entire city becomes covered in these colors as the days leading up to Mardi Gras approach. The first Mardi Gras flag of 2019, as photographed in the French Quarter, the day after New Year’s.

While there are parades that start on January 6, the main ‘parade season’ starts the five days before Fat Tuesday. Parades are usually made up of various decorated floats, decorated to fit the annual theme of each Krewe’s choosing, with riders filling the floats and throwing bead necklaces, stuffed animals, toys, and special traditional trinkets. Between the floats, flame-throwers, dance-crews, and, mostly, local high school marching bands parade as well, a huge contribution to the party atmosphere.

It is normal to hear people shouting at the riders,

“Throw me something, Mister!”

- even when the Krewe is mixed or all-female.

Below is a picture of all the “loot” my mom collected from just thirty minutes at the Muses parade!

Below are two pictures of floats during a parade. There are approximately thirty “riders” on each float, and approximately 30 million LED lights and plastic beads! Below that is what the costumes of the “royals” of each parade look like—their headpieces can be over 100 pounds!

Monday of Mardi Gras is known in New Orleans as Lundi Gras, and this is where the party really begins. During the day, an all-day party is staged in one part of the city, while parades happen in the other parts. Namely, the Krewe of Proteus (the second Krewe ever formed) parade. At night, my personal favorite, the music themed super-Krewe of Orpheus, where the crooner Harry Connick Jr., a hometown boy from New Orleans, has been the King on many occasions.

The tradition of Mardi Gras day is similar to the medieval tradition, still practiced in many places in Eastern Europe including Lithuania, where the King of Spring and the King of Winter fight each other.

In New Orleans, this is represented by the King of Rex and the King of Zulu. At sunrise, the Zulu parade rolls followed by the Rex parade, and they both meet at the center of the city on Canal Street, symbolically representing the meeting of winter and spring, black and white, extravagance (Carnival) and prudence (Lent).

A big party commences, and the last celebration before Lent, or for the majority of people who participate and who are non-religious, before going back to “reality” for a bit before the next festival season starts at the end of April.

Thanks to Gerard Paul for getting in touch about his Blog at ManyEats.com King Cake and its History: from France to Mardi Gras

" I just posted an extensive look at the history of the king cake: from its early roots in Rome, to its adoption for the Epiphany and Carnival, to its popularity in France, Spain, and the Gulf Coast of the United States. " 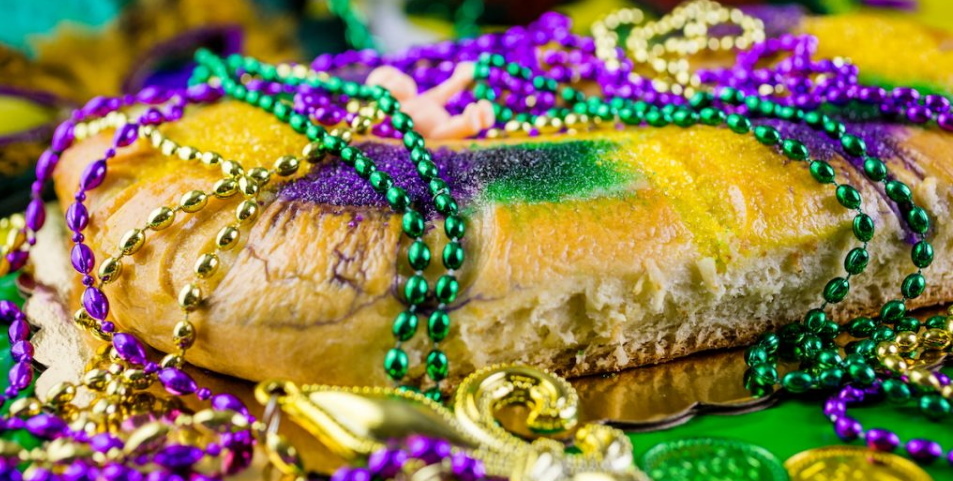