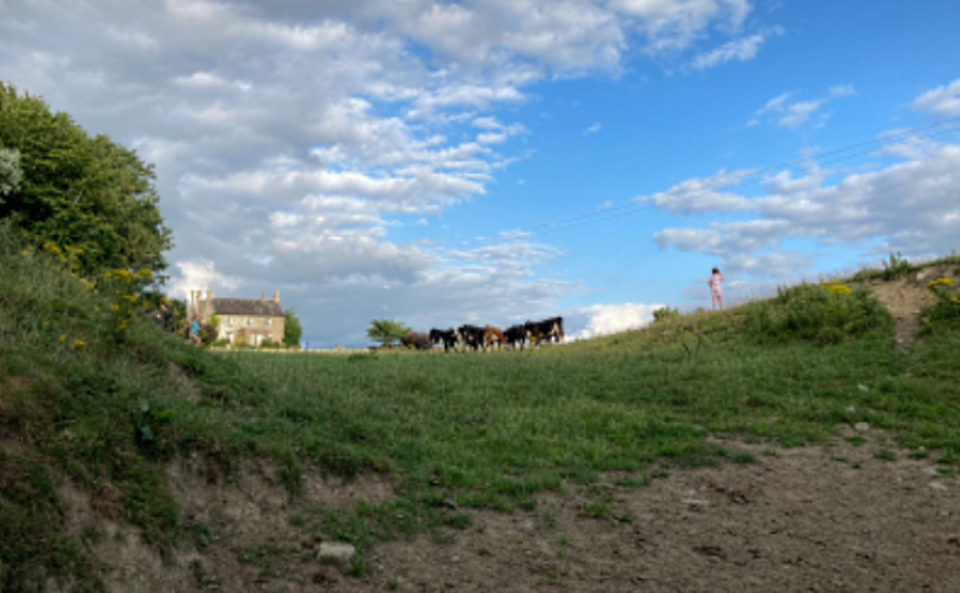 John's impressions of the evening

In the lead up to the Lughnasadh celebration the things that kept coming up were rivers and going with the flow. Slowly but surely that flow led us to Teltown, the home of the Lughnasadh festivities and site of the Tailteann Games.

We were given a great welcome by Renee and Bartle who run the Teltown House B&B.

We were also welcomed back by our old friends, the 2 donkeys - Freddie and Jimmy. Lots of joyful braying as we made our way down to the Blackwater River.

We had a lovely centrepiece of produce from N’s garden.

We remembered those who had been at some of our previous ceremonies at Teltown, particularly Eileen who added so much to the one she was involved in. Also Tom, Dana and BJ Harper. I felt that the 27 people that turned up were privileged to be on the original Lughnasadh site on August 1st and also on the Tailteann Games site during the Olympic Games which they preceded.

After sharing the historical information with the participants, with much thanks to M for his contribution, a silent meditation was held which focused on the Blackwater River and it’s cleansing properties which were an integral part of the ancient rites.

We all retired to the courtyard of Teltown House for tea and buns which were served from the aptly named Tailtiu Cafe.

Martin later heard a podcast by Manchan Magan suggesting that Blackwater was originally called Bo Guaire, Sacred Cow. It arises from Virginia Lake, which is fed by Loughanleagh (the Lake of the Cures). The latter a site of another celebration hosted by John in 29 July 2018 - Loughanleagh, Co. Cavan - The Higher Ground archive

Martin's Story of the Evening and background information....

Teltown is a landscape humming with energy and power and its always a privilege and pleasure to visit. Even more so when we are there for a special occasion using ceremony which John co-ordinated.

Teltown was the site of the great Teltown games that predated the Olympics. Indeed it is local legend that says it was people visiting from abroad brought the idea of the games home to Greece! And one fact that John left out was that during the revival of Lughnasadh games in Croke Park John himself was a competing athlete. Appropriate then that he should continue to bear the flame as a living link with history.

At Summer Solstice, if you could eclipse the sun to see the background of stars, Orion was holding the sun / Olympic flame. But on this occasion Orion was setting like the god of summer relinquishing his power to deity's of the coming winter for another year, which on one level is what Lughnasadh is all about. Anthony Murphy of Mythical Ireland also comments that,

“..... the constellation we know as Orion today might have provided the inspiration for great deities or characters of Irish mythology such as the Tuatha Dé Danann sky god Lugh /Lug, the great warrior of the Ulster Cycle mythology, Cúchulainn, and others, including Amergin Glúngeal (Amergin of the bright-knee, perhaps Rigel?) and Núadu Airgetlamh (the Tuatha Dé Danann king Núadu of the Silver Arm).”

The orange band is the horizon and you can see how Orion/Amergin/Lugh goes from Zenith to sinking below the horizon strongly suggesting the waning of the light god/godess...... interestingly Virgo is ascending on the eastern Horizon.... she was the last goddess to leave earth when Pandora opened the box laying waste to the world....... echoes of Shannon and Boand being destroyed by looking into a sacred well..... also echoes of winter. 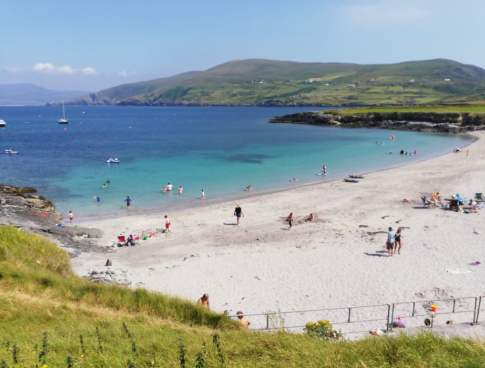 During my holidays last week I happened to find a sign on a beech on the Beara Peninsula which had a notice telling the story that this is where the Milesians came ashore to Ireland and then made their way to Tara.

Amergin was their leading Druid and is reputed to have uttered the following words to lay claim to the power of Ireland.

And it was at Teltown where the Tuath de Danann rescinded their control of the country to the Milesians. So I thought it would be appropriate to read the words as an affirmation of gratefully using and sharing our power, affirming “I am that” to each pronouncement.

To me it reflects the oneness of all life and shares concepts with Native American and Aboriginal mindsets.

Thomasina linked in, visiting these sites in Waterford.

Above: River Blackwater at Teltown House

Place where the Tuatha de Danann lost a battle with the Milesians and they were forced underground.

According to the Senchas na Relec in Lebor na Huidhre it was one of the chieftain burial places.

"The Annals of Ulster in the year AD 749 report that ships were seen in the air (some said above the monastery of Clonmacnois). Other sources report a similar episode at Teltown, during the reign of Congalach mac Maele Mithig (d. AD 956), when a ship appeared in the air above a market fair (oenach) and a member of the crew cast a spear down at a salmon below.

When he came down to retrieve the spear a man on the ground took hold of him, whereupon the man from above said:

Congalach ordered that the man be released and he scurried back up to his shipmates,

'who were all that time looking down, and were laughing together.'

Well they might. There is no point in trying to explore the Otherworld with the apparatus and outlook of the science laboratory: flying ships are not subject to the laws of quantum mechanics."

- built on old earthwork, founded by St Patrick. There is said to be a passage from Rath Airthir (Eastern Fort) to the church, a vast treasure in the crypt of church. Men and women looking for the fortune follow a piper and never return.

- several artificial lakes are in the area

- at entrance to Teltown House – Leary's Hole. St Patrick is said to have condemned King Laoghaire to remain in it until Judgement day. It is also said to be the entrance to Hell.

– deep long rectangular cleft sometimes recognised as a marriage site, although this could have been at the more circular hollow lower on the hillside.

References for the text - LeborGabala, Dindshenchas, Annals of Four Masters

Set among three hundred acres of rich pasture land in the heart of the Boyne yet just 55 minutes from Dublin Airport. and only a short drive from the towns of Navan, Kells and Slane, Bertie and Renée Clarke’s lovely creeper-covered 17th century country house overlooks the River Blackwater Valley.