I'm really hoping for good weather on 23rd September so that I can be out in nature with some little setting of crystals and other symbols of 'balance' and of letting go of the 'leaves' that have already fulfilled their mission. 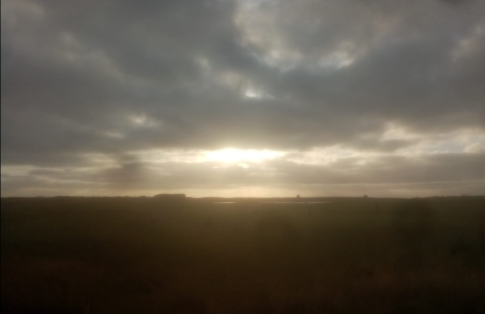 Another Summer that ends and another Autumn that begins. It all looks pretty much the same to me in the outside. Days getting darker and colder, leaves falling off of the trees.... every year the same.... However, the leaves that I am letting go of this autumn are not the same leaves that I let go of last year, the darkness of the upcoming months will be faced differently than in previous years. Most times, the outside seems to remain unchanged, but it's in the inside that almost subtle changes have occurred from one autumn to the next. Many small changes within many different people equal to a significan difference at a collective level. We are all connected and in this time in history is more important than ever before to realise and honour this. Happy Autumn Equinox 2022.

Eileen was on Hill of Tara

I am the dance of light and shadow- Rumi

So this is my second night without sleep because of shift work.

I came home and all I knew was that I had to go to the beach. Before that I wanted to quickly take some flower bulbs out of the boot of the car to put them out to be planted. It struck me that this is a time of year we can work to place things in the dark (interior) that will be busy sending out invisible roots all over winter and will show above ground around the spring equinox (exterior).

Continuing on my way to the beach I picked up some sticks and some autumn flowers from the garden and walked through the field admiring the blackberries growing in abundance.

Crossing the ditch I found my way to where some rock juts into the sea. The tide was turning and there was the occasional kiss from the sea froth generated by the wind and waves.

I placed four rocks in the cardinal points of the compass and I arranged the sticks into eight radial arms so as to form a rough circular pattern to contain a centre big enough to place the flowers and a piece of labradorite. Labradorite I grabbed off the desk as I was leaving, because I thought it would be good to have a dark stone that is full of colourful iridescence to represent the play of light and shadow at this time of the year.

I turned to face each direction and bring in the qualities represented by each; inspiration, growth, harvest, rest etc. When I got to calling in the centre I repeated a line that struck me from Summer Solstice.

"I am the source and destination of all directions"

That triggered the thought stream of..... I am north meets south, east meets west, up meets down, inner meets outer, spirit meets matter.

Then I considered what was going on in the world and the war in Ukraine . And then since it was equinox I wondered how balance could be found in the world only to instantly take it back to the personal level of finding inner balance and if I could do this then I would express peace on the inner and the outer which would affect the outer .

How does this resonate, how true is that for me?

How did this make me feel how true was it?

I am at peace with the world, I am at war with myself.

I am at war with myself, I am at peace with the world.

Giving myself the freedom to play around with these statements I observed feelings bubble up and after about five minutes I breathed out the inner conflict and gave myself an internal hug.

With the extra stick I considered all the things in my life in the last year that no longer serve and with each thought I snapped the stick into shorter and shorter pieces until I had a handful of short twigs which I threw into the sea to break down and return to their natural elements so they could be repurposed by nature.

Centre for listening to me and also for talking to me, may we always talk to each other and hear each other.

Thank you North for lending me your stability and perhaps my practical approaches will benefit the world.

Thank you West for your abundance and fluidity and maybe I can give to those who need.

Thank you East for inspirations and renewed energies , I hope that others may find inspiration in what I do.

May the energy in this circle now go into the world, especially to those who most need it.