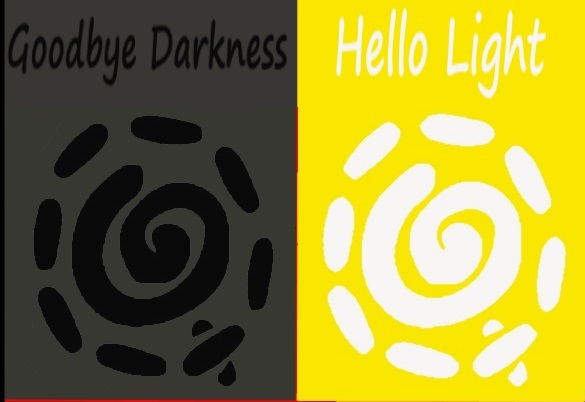 On the evening of Friday 21st December we met at Dowth, County Meath, to celebrate the Winter Solstice organised by Tara Celebrations. 11 people turned up on a dark, windy evening to celebrate the return of the sun.

Some of us arrived early to prepare for the ceremony and we met dozens of people leaving the site who had been there for sunset which confirmed to me that we are not the only ones upholding the traditions of our ancestors. (One of the passages of Dowth, meaning “darkness” in Irish, is aligned to the setting sun at this time of year and was built thousands of years ago).

As had been planned, we formed a spiral from nearby stones on which we placed lighted candles and at the centre of the spiral was a (raised) fire. After entering the celebration area, we stood outside the spiral while Zoey gave us a run-down on what was about to happen as well as some information about the idea of embracing the Darkness within ourselves before shedding it and letting in the Light.

This was followed by a meditation which invited us to “feel our feelings”, especially the dark, negative ones which we wanted to acknowledge before letting them go and making room for new, positive feelings which we desired as the days get brighter and we head towards the season of Spring.

“Let in the light”, we were told and when we opened our eyes we were greeted by a magnificent full moon which had appeared from under the clouds. We then wrote down those feeling we wished to get rid of and slowly entered the spiral before letting them go into the fire.

The general consensus was that this was a powerful experience and more than one comment was made about people feeling the memory/presence of our ancestors during the Celebration. While each individual walked to the centre of the Spiral, the following was recited

"Inthe Spiral I move inward and touch the centre of my Being with all mysenses” (Arunga Heiden). 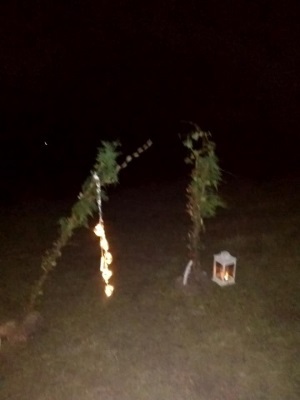 The Entrance to our Celebration area at Dowth

After our “letting go”, we were required to dwell on what we wished to bring into our lives during the coming brighter days and we then had an “Open Heart” event around the fire where people shared inspirational stories and anecdotes. This was followed by our usual grounding which includes eating and drinking and there was plenty of food and drink for all - including yummy Mulled wine (alcoholic and non-alcoholic) which was appropriate for this time of year.

There the story usually ends, but on this occasion I feel more is required to do the occasion justice. On this occasion I want to paint a picture of the place and especially the people that made this celebration a little bit special.

That full moon for instance, had to be seen to be believed as it lit up the whole area right on cue – and it's appearance was greeted by the trumpeting Game-of-Thrones-like horn of one among us. There was also a HUGE halo around the moon the likes of which many of us had never seen before and this added to the atmosphere of the occasion.

Some walked around the dark, silent fields surrounding the Cairn at Dowth and were struck by the powerful energy they felt there. An energy created by nature as well as the myriad of peoples who have honoured the occasion of the return of brighter days over thousands of years.

We became part of that energy when we celebrated the Winter Solstice 2018 at Dowth. The people present, more than anything in my opinion, made this a wonderfully uplifting occasion which will be remembered and I’ve no doubt it's effects will be felt well into the new season. People like Zoey from Switzerland, our wonderful host for the evening, with her colourful costume, her thought-provoking incantations and her beautifully planned ceremony. Zoey's partner from Glastonbury, also wonderfully attired for the occasion complete with animal horn and his fire-building skills which kept us warm and bright all the time.

People like the softly-spoken wise man who arrived and his companion who is from Cuba. When asked what brought them to a field in Ireland on a windy, dark December he simply replied: “We follow ley-lines around the world, they’ve never let us down – and they certainly didn’t tonight”. As you do! The couple from Dublin (“we read about this online”) made it 6 and the 5 Tara Celebrations “regulars” madeup the 11. (Bernadette, Jackie, Margaret, Jaume and yours truly,Pat).

Nobody was in a hurry to leave as we sipped our mulled wine, shared food and stories from all over the world before everyone gave a hand to leave the site as we found it. There was agreement among us as we stood there under the moonlit sky musing about what this season has become for most of us – what with shopping, planning, rushing around etc, there was agreement that tonight – with the land below us, the wind in our faces, the starry sky above, the laughter, the celebration we just had, the feeling of calm and expectation for a bright future –tonight we had the better deal as we pondered on the throngs milling about in towns and cities within 10 miles of where we stood. Although it felt like a thousand miles away... it felt like a thousand years away.

It has to be said that most of our celebrations are like this one: profound, simple occasions that fill a need in all of humankind for sharing and talking and thinking and getting close to nature and going without and going within. How wise our ancestors were!

Until the next celebration comes around on the Wheel of the Year, Imbolc,

Dowth mound stands in a large field, sharing the space with grazing sheep. On the northern bank of the river Boyne, it is signposted from the Slane to Drogheda road. Drive directly to the site and park on the roadside. There are no facilities, such as toilets and gift shop, at the site, but there is a comprehensive information board. Entrance is through a metal squeeze gateway.

The large mound is about the same size as Newgrange and Knowth, raised between approximately 3200 and 2000 BC, making it the third presently visible on this ridge.

In 1930's British Israelites searching for the Ark of the Covenant used dynamite at the top of the mound.

There are two chambers, referred to as Dowth North and Dowth South, and a souterrain (constructed around the 10th or 11th century). There is usually no public access to the chambers of the mound. North is said to be aligned to Samhain and the South to Winter Solstice. This was restored in 1962 and 1975.

In July 2018, another passage tomb in the grounds of nearby Dowth Hall was excavated, revealing significant examples of Neolithic rock art similar to those at Dowth and the other Brú na Bóinne sites.

1. Ulster Cycle, Cuchulainn come to Dowth and fights a giant, one of three brothers - into the river.

2. Dubad, which means 'Darkness'. Brú of the Druid Bresal, build a great tower reach heavens. All men of Ireland build the tower in a single day, his sister casts enchantment, sun will not set until tower complete. Brother is overcome with lust and commits incest, breaking the enchantment and causing the sun to set before the tower is built. 'Night has come upon us', laments his sister, 'and Dubad shall be the name of this place forever'.

Dowth (Dubthach or darkhouse) is the place of death, the setting winter solstice sun shining into the chamber of Dowth South every year. It is a masterpiece that complements the dawn sunrise in Newgrange eight hours previously.