Pishogues for May Eve & May Day

Where to begin? There are lots of pishoques (superstitions) about May day.

Below is a photo of the furze on Hill of Tara, looking over to Loughcrew (Slieve na Calliagh - Hill of the Hag). Flowers and Cows describes how yellow flowers connect to Bealtaine.

To put out a white handkerchief before day and bring it in afterwards and if anybody is sick to rub it on them, it will cure them.

If you got up at six o'clock May morning and wash your face with the dew and dry it with the sun you would have good luck for that year. Some say your face will not get sunburned in the Summer.

Long ago, on May morning, lots of old woman went out in the morning before the sun arose and swept the dew of the grass by pulling a long rope after them and calling,
“Come all to me, Come all to me.”

It is also a practice not to put outside the door any red ashes or a man to put out his pipe lighting.

Nobody ever gets married on May day. 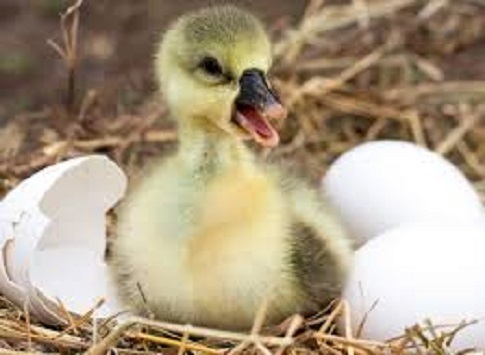 If you put down a clutch of duck eggs in the middle of May Day you would have all ducks and if you put them down before the sun gets up or after it goes down you will have all drakes.

If you give out a clutch of eggs on May Eve all the hens will die that year.

Hares are transformed into witches.

It is said that if you sit on the grass May Eve the fairies would come that night and carry you away.

They will be holding dances and meetings on hilltops from dusk to dawn and it is essential to avoid these - protection against fairies is a must.

Some people put a ring of ashes outside around the door. There is sure to be footprints of fairies in the ashes and if there is any of the foot prints faced in, towards the house, someone is going die in that house before the year is out. Fairies at the Door . However, as always with old sayings, there is also a version where turned inwards means marriage and outwards death. Sometimes you can't win either way.

Persons leaving presents of fresh milk and honey for the fairies would have a plentiful supply of butter and milk throughout the whole year.

Fairies are not the only dancers

Dancing was the most important of the sacred rites in all ancient religions; and the circular serpent-dance round a tree has been practiced from the remotest antiquity.

In Ireland it is still retained as the favourite pastime of the people on May Day, when all the young men and maidens hold hands, and dance in a circle round a tree hung with ribbons and garlands, or round a bonfire, moving in curves from right to left, as if imitating the windings of a serpent. May Day Dances from the Duchas Collection

On May Eve the people put up a May Pole. On the top of the pole they tie a well blossomed branch of furze with a white ribbon. Then they decorate the pole with primroses, violets, mayflowers, rockets and other wild flowers. The children dance around the pole and sing:

"Dance around the May pole till the sun goes down".

The white ribbon which ties the pole is supposed to be a cure for a sore head.

And one of the odder connections is that the pole should be put in the dung or manure pit, as well as the crops and thatch on the roof of a house.

Another old custom (from Mullingar in Westmeath) was the erection of a May Pole. A tapering pole about 30' long was stripped of all it's branches and peeled. To the top were tied long streams of ribbons of different colours. The pole was then fixed in the ground - on the green patch where four roads met (On first Sunday in May). Every Sunday evening during the month a dance commenced about five o'clock and lasted until nine or ten. People came to it from all directions by the different roads. Fiddler, pipes and tambourine players sat on a plank seat erected under a hedge and played together and in turn while the people danced. "Single turns" were danced on boards thrown on the road. (The barn door was often used for this purpose)

Competitions in jigs and hornpipes were quite common. For refreshment men drank poteen and the women milk (?) with oaten cakes. Girls wore shawls and red petticoats. Milk was drunk from noggins.

In the morning before the sun rises, green branches are brought into the house to show the beginning of the Summer.

When May Day comes people put May flowers (marsh marigolds) around the doors for good luck. One of the most common customs is scattering flowers on the doorstep.

It is said that the fairies will not pass flowers, particularly yellow ones, and cowslips, primroses, marigolds and gorse (furze) were used.

The old people used to tie the May flowers round their cow's horns so that their cows would have a lot of milk that year.

One of the superstitious customs connected with May Day is on May eve. Anyone who carries out this custom goes and gets the bark off a "rowan berry tree" and early on May day they tie a piece of this to each of the cow's tails with a piece of a red rag. They believe if they don't do this both the cows and their milk will be "overlooked". Duchas May Day Co. Cavan

In Co. Mayo, people would gather a variety of herbs and flowers to create a mashed poultice they called Bealtanach — this substance was then rubbed on their cow's udders and believed to increase springtime’s production of butter and milk (and since we don’t have a clear record of what herbs and flowers and many do have medicinal properties, this one could be true!) Folklore & Mythology

If a cow will calf on May Day, they say the cow and calf will die. On May day some people light a blessed candle under the cows to bless them.

When the cow was milked a cross was made on her back and side so that the cow would have plenty of milk for the year.

It is not right to let out any cow until after twelve o'clock on May Day because the fairies might steal them.

If a white heifer appeared in the herd it was good luck.

Lady Wilde refers to her in 'Ancient Legends, Mystic Charms and Superstitions of Ireland: 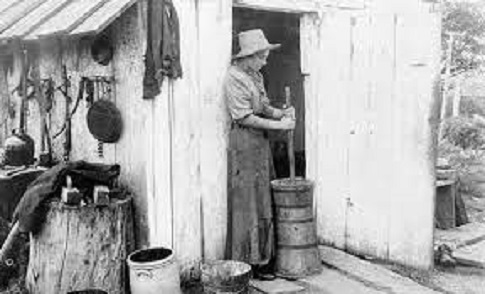 If you spill a drop of milk on May day they say you will be spilling it for the year.

They say you should not give away any milk on May day you would not have luck, but if you make it on May Eve you will have luck on your butter.

To put a churn outside the door on May day and turn it to the neighbours door you will take away their butter.

The power was supposed to be got from the Evil One on May morning by skimming a well before the sun rose. There was a rhyme to be recited whilst the skimming was going on. A piece of whitish fat or butter with milk dropping from it was supposed to be left at the door of the house where the butter was to be taken. The people of the house would know then that they would have no butter when churning.

Picture from the article: butter-making-and-the-evil-one

It is said that on May Eve horses can talk.

One night a man stayed inside to wash his horse. At twelve o'clock the horse went down on his knees and said,

and the man fell sick immediately.