Coincidentally, Christ’s birth story is set at night when Orion is high in the sky and stars light up the darkest time of the year. It can be seen all over the planet. Is it fanciful to suggest that, along with the Star of Bethlehem, many are important symbols in the Nativity story?

Look up, to the south east, on a clear night and there stands Orion like a gigantic star being, a significant sign that Winter has arrived. Striding from east to west this seasonal visitor is magnificent. But there is more, as Orion rises and sets in the same area of the sky as the winter sun, linking it to the Winter Solstice. Between late summer / autumn and Beltane and May time, Orion dominates the sky, along with Aldebaran, Pleiades, Polaris and Ursa Major. Then it is said to move into the Underworld for the summer. 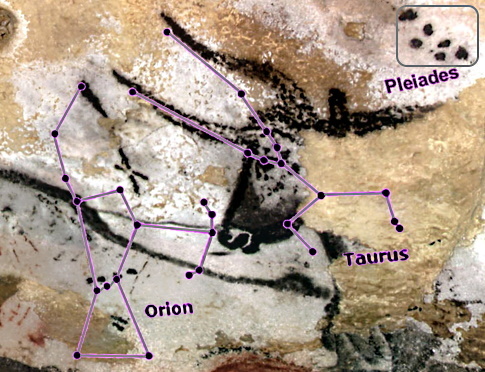 It has been identified on the paintings of the Lascaux Caves, in southwestern France, usually estimated at around 17,000 years ago.

In Greek mythology, Orion was a mighty giant and hunter. And there is a similar myth in Ireland: Daithí Bán – the giant in the sky Terra firma Ireland - Stories in the Stars

As we viewed the constellation of Orion, we explore the legend of Daithí Bán – Mayo’s famous giant who roamed the Nephin mountains behind Ballycroy. Like Orion, he was a notorious hunter and whilst he enjoyed stalking deer in the wooded hills, he loved nothing more than the taste of fresh salmon and would often wade into the Atlantic to scoop them up into his giant hands. Daithí Bán’s adventures came to an abrupt end as he too, like Orion, was tricked to a watery grave. The gods cast his image into the night skies to be forever preserved – he appears from Winter to Spring over Wild Nephin Ballycroy National Park.

Three lined-up prominent stars are easily recognized in the centre of the figure. The Chinese regarded them as the three gods of fortune, prosperity and longevity. Others say they represent the three ages of human life, youth, middle and old age – and a Biblical link is to the Three Wise Men.

Most of the information below links to Hebrew interpretations but there are Babylonian constellations:

Three in particular are of interest to the nativity scene. The constellation Orion was known to the Babylonians as the True Shepherd of Anu, where Anu was the location of the sky, meaning the ecliptical area. Opposite Orion, on the other side of the ecliptic, was the constellation that we know as Aurgia, the Charioteer. However, to the Babylonians this was known as the Crook, as in the shepherd’s crook. So this part of the sky was a large image of a shepherd and his crook which stretched across the line of the ecliptic. Babylonian connections

Bethlehem is made up of two Hebrew words: Bet – house - and lekhem - bread. Wheat and bread form a common theme in the Nativity stories.

Virgo is often represented by the goddess of wheat and agriculture, usually depicted holding a sheaf of grain in her right hand, marked by the bright star Spica (ear of wheat). However, there is a problem connecting this constellation to winter as Virgo, the maiden, can only be seen in spring and summer in the northern hemisphere.

Blue clothes - the colour of the sky - as the mother of God, she connects Heaven and Earth.

The shepherds were the first to be notified of Jesus’ birth and are an important part of the nativity story. Venus is the morning star. Flammarion described Venus as the shepherd's star:

"She shines in the east in the morning, with a splendid brightness which eclipses that of all the stars. She is, without comparison,the most magnificent star of our sky; the star of sweet confidences."

Matthew 2:1-9: Now after Jesus was born in Bethlehem of Judea in the days of Herod the king, behold, wise men from the East came to Jerusalem, saying:

“Where is He who has been born King of the Jews? For we have seen His star in the East and have come to worship Him.”

There have been many attempts to identify the Star. In art it is usually portrayed as 5 or 8 pointed. Maybe a comet, perhaps a closeness (conjunction) of two or three planets or a supernova. But note, according to Matthew it was only the Wise Men who saw the star. It was not the bright shining star seen by everyone that is so often portrayed these days.

In Poland Christmas is also known as the Festival of the Star. In the tradition of Wigilia a 24 hour fast begins on Christmas Eve. No food is eaten or presents opened until the children of the house spot the first star to appear in the night sky. Only when they find it, are the candles lit and the holiday meal served. After dinner, the children wait for the arrival of the Star Man, Gwiazdor, who brings candy, fruit, and small gifts to good children. Just like Saint Nicholas, Star Man asks if someone was naughty or nice – the naughty may receive a birch stick or a rotten potato! Wigilia

Hay was Jesus' first bed, connecting to grain as he called himself “the bread come down from heaven” (John 6:41).

Although the Milky Way legends are usually linked to milk and rivers there are several cultures that have myths that it is straw - Armenian legends call the Milky Way the "Straw Thief's Way", and in the Middle East and Central Asia Persians, Pakistanis, Arabs and Turks may have borrowed it from the Armenians.

Wren Boys – old tradition in Ireland (and other European countries) celebrating 26 December, St. Stephen's Day, "hunting" a wren and putting it on top of a decorated pole.

Praesepe - Latin for "manger" or "crib" - (aka The Beehive Cluster) is a star cluster in the constellation Cancer. 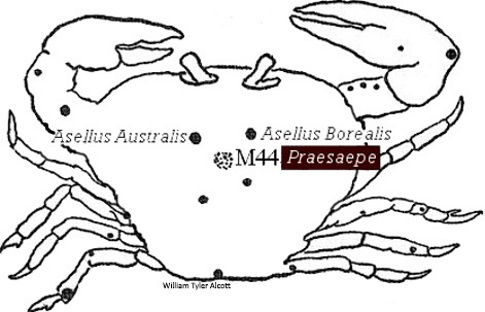 Jesus is laid on a crib of straw –

Because Jesus was laid in a manger, the nativity scene is known in Italian as a presepe, from the Latin word praesepium, meaning “manger”. 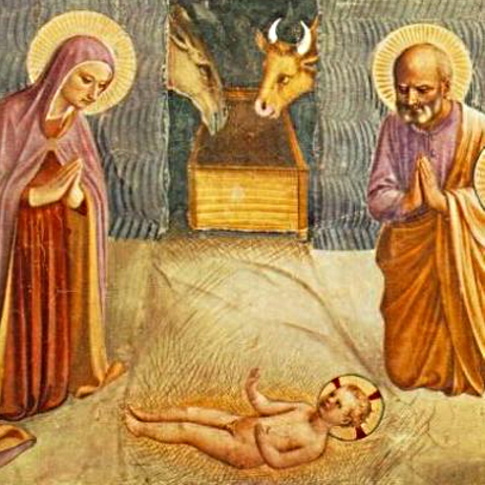 In the middle of Cancer, near Praesepe, are two stars called the Aselli - Donkeys - that are feeding from the Manger; Asellus Borealis and Asellus Australis. The northern donkey is said to be male and southern female.

The baby born in a manger might relate to the idea of Cancer being the ‘Gate of Men’, according to Chaldaean and Platonist philosophy, through which souls descended from heaven into human bodies, or into creation. Its opposite sign Capricorn represents the ‘Gate of the Gods’ where souls of the departed ascended back to heaven. asellus-boreali

Taurus is a seasonal constellation only visible in the winter in the Northern Hemisphere, north-west of Orion. It is highest in the evening sky in the months around December. Extending a line from Orion's belt to the right leads towards a V of stars nearby. This is the face of Taurus the Bull.

Bulls in Nativity scenes are often shown near the manger, and sometimes actually feeding on the straw. Some suggest that their breath keeps the baby warm.

Pope Benedict XVI pointed out in his book Jesus of Nazareth: The Infancy Narratives, that neither asses nor ox are mentioned in the Bible. "In the gospels there is no mention of animals," the Pope writes. He suggests that references to the ox and the donkey in other parts of the Bible may have inspired Christians to include them in their nativity scenes.

At the Christmas 2009 Meditation we looked into the face of Baby Jesus and saw ourselves, connecting to our own Inner Child. You may like to use this as a meditation.

When you get what you want in your struggle for self, and the world makes you King for a day,
Just go to the mirror and look at yourself, and see what that face has to say.
For it isn't your father, or mother or wife, who judgement upon you must pass,
The fellow whose verdict counts most in your life is the one staring back from the glass.
Some people may think you a straight shooting chum and call you a wonderful guy,
But the man in the glass says your only a bum if you can't look him straight in the eye.
He's the fellow to please, never mind all the rest, for he's with you right up to the end,
And you've passed your most dangerous, difficult test, if the man in the glass is your friend.
You may fool the whole world down the pathway of life, and get pats on your back as you pass,
But your final reward will be heartache and tears, if you've cheated the man in the glass.

About a day before Christmas the crib is built and it is taken down on the twelfth of January. It is built on a frame and covered with stone-paper, and in the crib where Jesus lies is straw; it is said that if you get a bit of this straw and carry it in your pocket you will never be in want of money throughout that year. It is also said that if you get a bit of holly or ivy out of the crib and keep it in your house you will have luck and comfort in it throughout the year. An Irish crib

Once you have obtained your figures and set the space, they can be placed in the scene however you prefer. One symbolic action is to leave Mary, Joseph and Jesus outside the main area (as they are traveling) until Christmas Eve when they arrive in Bethlehem and can be moved in. Jesus may remain out of sight until Christmas Day.

Similarly the Magi are traveling and you might like to keep them at a distance until 6 January (Epiphany), bringing to Jesus three important gifts: gold, incense and myrrh, to celebrate the birth.

The things used to make a crib are sally sticks and twine, all the sticks are put together in the form of a baskets and then a little stick is got to keep up the crib then the crib is made. From the Duchas School's Project - making a manger

A cure for toothache is to get a straw from the Christmas Crib and chew it. https://www.duchas.ie/en/cbes/... 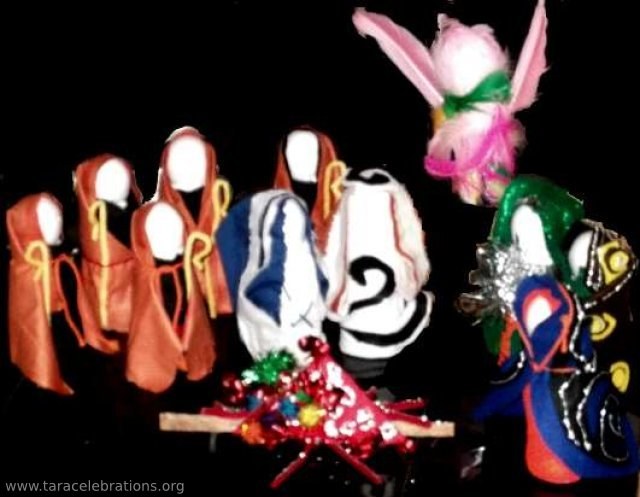 Toilet Rolls recycled - Inspired with good intention and with a connection to the energies of the archetype these serve as symbols of the being you want to connect to.

Wrap a suitable cloth around the tube and fasten. The head can be a oval piece of paper attached to the tube.

You may or may not want to put human features such as eyes and mouth onto it.

We shared these Nativity figures at a meditation. They were useful as they provided a standing figure and balanced easily on the floor. 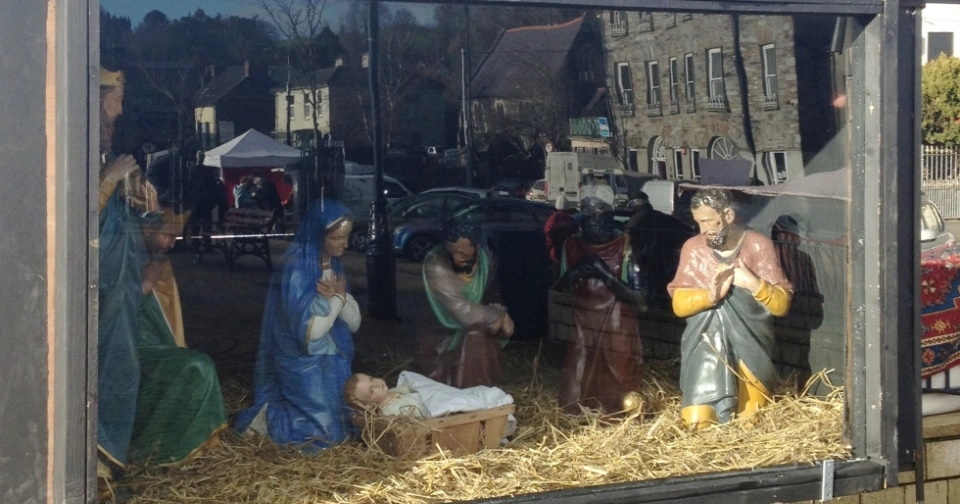 In this part of Ireland putting up a nativity scene (like the one in Bantry town square, above) at Christmas time is as natural as breathing. Known as cribs, they appear everywhere at the beginning of December. Every Irish home has one, perhaps passed down through the generations, and they come out from the attic storage boxes along with the decorations to be displayed in a window or on a mantlepiece or hall table. Even for families that consider themselves non-religious, the crib is an essential part of getting a house ready for Christmas. There’s one for every nook or sideboard and one for every budget.