I walked away from this one with the energy on a high! For the 4 of us that gathered, 3 at Clogherhead and 1 in Iceland, all on a beach... the energy seemed super strong.

This was a first time using Technology bringing us to Iceland and Iceland to us. I had discussed with Daniela the crystals I would bring for the centre but of course 1 or 2 extra made their way in there at the last minute. Daniela also used the same stones to enhance the link...... and it all really seemed to work. 2 males, 2 females.

The Centre consisted of a circle of about 5ft diameter with a stick at the centre where we would later stand as the gnomon of the sundial. The centre also had a large brown Celtic knot work of 3 horses to represent the winter energies being birthed in the eye of the summer solstice.... the balanced expression of yin & yang .This was overlain with a bright sunny cloth representing the summer and the sun. Placed on this was a small sundial, crystals and some roses. The rose is a good example of balance as it carries summer's fair flowers with winter's harsh thorns. Crystals used included Labradorite for its iridescent quality , Clear quartz to represent the strong solar energies, Rose quartz to represent Love, Amber for its sunny nature and Gold to represent the sun and the abundant decadence in nature.

The sunrise positions were marked and an axis pointing to the Sunset was drawn in. This alignment took in Donegal (where Anne was tuning in) and the Icelandic area to the north (Daniela) and the Nile Delta to the
south. This is also where sunrise would appear on Winter solstice. Others were tuning in From Navan and other locations. Bernadette had even set up a Pyramid and Pharaonic statue.! 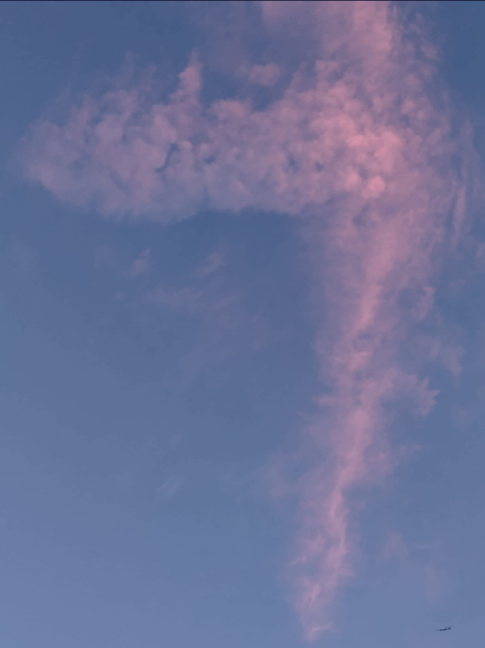 A line of 7 stones led from the winter solstice sunrise direction to the centre of the circle. This was to become a ladder we would ascend bringing our gifts to the front and "centre" of our lives. (Pat's photo of a heavenly 7 in the clouds is another synchronicity!)

The directions were marked by Pat and Gloria using stones from the beach. North was marked by a rock, East was represented by a feather from Fluffy the Rooster (who was chuffed he could help, the poor hens will never hear the end of this story every morning for the foreseeable future.)

South was marked by the lantern and West by a sea shell. Centre by incense.

After centring and opening Daniela led us on a deep but gentle meditation filling our core with healing light, enough for self and others. This meditation is available below.

We then chose a stone to represent the change we wished to see in the world. The symbolism involved bringing that into the centre, your centre, to claim the gift for your personal benefit and the benefit of the world (Planet, peoples, animals etc). The symbolism of then standing with your gift and looking in the direction of mid winter sunrise to consider what impact you have on the world and what we would be cultivating to rebirth in ourselves over the summer.

The healing circle was in 3 rounds and included, self, friends and family and the wider world. The energy ever spiralling outward. We included our friends in the group who were unable to attend.

We followed up with open heart contributions but the one which would be most appropriate to share here was Pats poem "Drop a pebble in the ocean" . (see below for the full version). It gave a brilliant description of how our words/actions ripple out and have unseen effects. Also doubly appropriate as it refers to the beach!

We wrapped up with a final blessing after thanking the energies, followed by Tea and munchies!..... During which we heard the song of the sea, a strange & plaintive "UUUuuu" that had us stop to listen. Pesky mermaids trying to steal the limelight no doubt... interesting as Bernadette was using the Mermaid Tarot in Navan tuning into the ceremony.

A special word of thanks has to go to Johnny Brew who distilled a long ceremony into a short video story for independent media.ie and is available here to give a further sense of time and place.

Click here to view the Independent.ie/video by Johnny Brew

Drop a Pebble in the Ocean

Drop a pebble in the water: just a splash, and it is gone;
But there's half-a-hundred ripples circling on and on and on,
Spreading, spreading from the center, flowing on out to the sea.
And there is no way of telling where the end is going to be.

Drop an unkind word, or careless: in a minute you forget,
But there's little waves a-flowing, and there's ripples circling yet,
And perhaps in some sad heart a mighty wave of tears you've stirred,
And disturbed a life was happy ere you dropped that unkind word.

Drop a word of cheer and kindness: just a flash and it is gone;
But there's half-a-hundred ripples circling on and on and on,
Bearing hope and joy and comfort on each splashing, dashing wave
Till you wouldn't believe the volume of the one kind word you gave.

Drop a word of cheer and kindness: in a minute you forget;
But there's gladness still a-swelling, and there's joy a-circling yet,
And you've rolled a wave of comfort whose sweet music can be heard
Over miles and miles of water just by dropping one kind word.”

Anne was in Donegal for the 21st June...

Sunset fires lit up across the land - a nice walk along the beach - but there was no sign of the labyrinth on the way back, even though the tide was going out??!!

Bernadette was in Navan, Meath

Sand was from beach in Egypt. Cloth was used on many summer solstices on Tara.

John A & P were on the Hill of Tara

A screen grab from the sun position app. 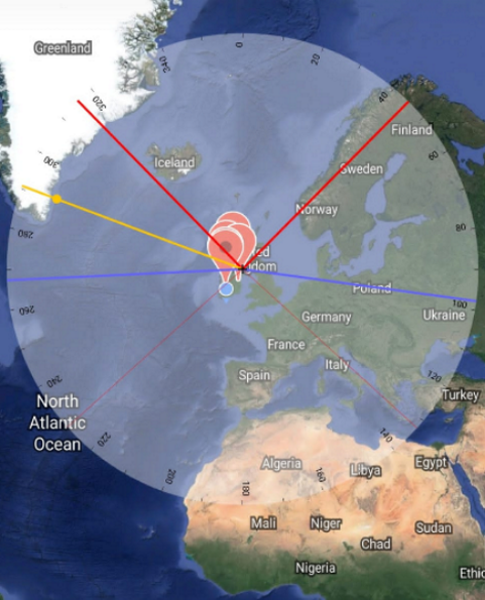 The blue line on the right shows moon rise over Ukraine.

The weak red line bottom right shows where winter solstice sunrise would be over Egypt.

The left side is all sunsets and moonsets.

Summer Solstice sunset is almost over Danielle in Iceland.

The yellow line shows where the sun will be when we start at 8pm on 21st June.

Healing the world by healing ourselves.

With many fear based narratives at the moment such as; Covid, Monkeypox, war in Ukraine, looming global recession etc. etc., it is all too easy to abdicate responsibility and say:

“It's out of my hands, there is nothing I can do”.

We are here to remind you that if you believe that, then this becomes your truth. The truth. There is another way. The ancient way of the ancestors.

We are using this solstice to pause. Breath. Take a step back and realise that we are co-creators. As the sun stands on the horizon like a sentinel we too should pause and become sentinels of light. To embody and actualise, realise, visualise and become more of our Divine selves. A sentinel is one who watches and examines. We need to heal ourselves to heal the world. Us embodying high vibrational energies is what the world needs - right now.

“We must be the change we wish to see” (Gandhi).

Only then do the healthy ripples and energy go into the communal yoke sac from which we all feed.

The celebration will be in two main parts.

Firstly there will be a meditation to help guide, focus and fill us. For no one can pour from an empty cup. We are doing this for ourselves and those whom we love and doing it for those we don't know as well. We will be encouraged to pick a goal or quality and embody that in this moment and going into the future.

The second part of the celebration will involve being the living Gnomon of a giant sundial. Gnomon from the Greek meaning, one who knows or examines. It will cast a shadow telling us which direction we are facing and likely to travel. If we set our sights on positivity, health and happiness then we are feeding into a world that will reflect that back to us. If we focus on the brokenness of the world we will generate more of the same. So this solstice where is our shadow pointing and do we really want to go there?

From the summer solstice celebration of 2020 we used the symbol of the wheel of the ship implying we were all on the same boat. Now we are on the beach and the ship has come ashore. The triangular sales of the ship were prefigured in the 2012 celebration of the golden triangle. Now the triangle has become the Gnome of the sun dial.

Coincidentally the logo of the wheel pretty much centres over Port Beach!

The tide will be on the way out and draw the energies of peace, love and healing we create into the world.

The celebration encompasses inputs from a male and a female embodying the divine feminine and divine masculine energy within each of us, from parts of the planet where some of the oldest softest rocks are to be found (Ireland) as well as some of the newest toughest rocks (Iceland). Ireland is geologically at rest where as Iceland is the polar opposite. A meditation of Divine balance.

If you feel called to join us aiming to raise the Earth's vibration on one of the energetically strongest days of the year, we will be delighted to embrace your energy!

link to Google Maps - Location of Port Beach This is the location, past the wooden beach protectors and where the road widens and there is a large grain field.

Bring with you: Torch (in case there is no sun) - Clothing suitable for an evening on the beach (even in the summer it can get chilly!) - Something to share in Open Heart poems? song?- flask of tea - nibblies to share.

Just for general interest this is a map of those tuning in to Summer Solstice from 19th to 24th June 2022 - obviously not totally complete as some hide where they are but gives a good idea for the Global Spiritual Wheel.