From the Kumulipo - a Hawaiian creation chant:

The Pleiades are frequently known as The Stroilin, and neighbours, when visiting, or on a Ceilidhe, time their departure by the position of this constellation. If the Pleiades are setting they will say "It is late, The Stroilin is going down!" https://www.duchas.ie/en/cbes/... Neale, Co. Mayo

When I was a boy at home my mother had Irish names for many of the stars and groups of stars. The only name I can presently recall is the Dreoilín. (Google translates this as 'wren') This as well as I can remember, was applied to a group of 7 stars which lie very close together and may be seen about 10.30 o'clock any bright star-lit night pretty high up in the south-eastern sky. I am not sure but I think it is the group of stars called the Pleiades. They are so close together and their light blends so, that it is sometimes difficult to say if there are seven or only six in the group. https://www.duchas.ie/en/cbes/... Croom, Co. Limerick 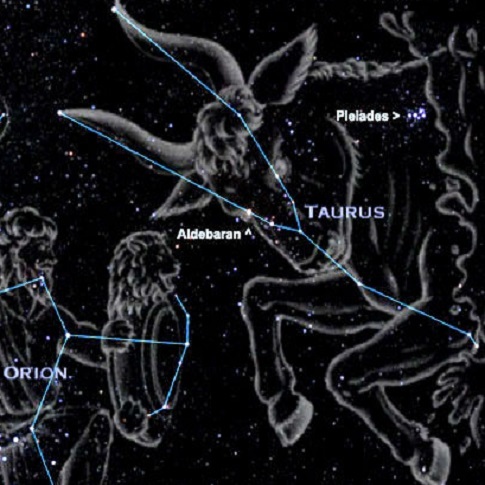 For many ancient timekeepers the Pleiades rising, heliacal (dawn) or acronychal (night) positions marked a special period or start to a new season.

The main festivals connected to the Pleiades have changed over time due to precession, that is because everything in space is in motion. As our Milky Way rotates, our sun is carried once around the galaxy every 250 million years.

Because of the drift in timing we can't just go back to acknowledging their movement at the same time of year, or the same traditions, as our ancestors. The conjunction isn't in late March anymore, it is in May; the heliacal rising isn't in May it's in June. Thus the Pleiades heliacal (morning) rising isn’t in the spring anymore but is now aligned with the summer solstice.

Samhain: Rising in the Evening The acronychal rising (around the autumnal equinox to winter solstice), the cluster rises in the eastern sky after sunset. This movement marks the triumph of night over day. It is the beginning of the time of year that is ruled by the moon. The cluster of stars are seen rising in the eastern sky as the sun's light fades in the evening. On a clear frosty November night is the best time to see them. These stars were an opening into the Otherworld and thus associated with festivals celebrating the ancestors and remembering those who had died. They herald winter, shining from dusk until dawn between late October and early April.

Late November: The culmination (about 21st November) when the cluster is at the highest point of the sky. This occurs at midnight. It is a highlight in the theme of the month, the strong presence of other realms and the possibilities of connecting to them. A time to give thanks for the fading light, for all that has gone before, the ancestors, the fruits of the earth now stored up for winter.

Perhaps it is fitting in this time of Connection that 21st November is World Hello Day. Since 1973, when there was conflict between Israel and Egypt, this response to bring people together has been promoted. The aim is to greet a 'Hello' to 10 people today. It is good day to be inspired, as Daniela is here - 2022 - Cosmic web connects all & everything ... if you just smile...

Finding Meaning in the Cosmos - Samhain and Lughnasadh- University of Chicago

How to celebrate these celestial connections?

It is as if we are opening the door to the unseen world, as above so below. We are aware that the veils are thin between earthly realms and the Otherworld, usually regarded in some way as 'under' us, and we can in a moment of quietness be aware of the Celestial world 'above'. Thus we bring in the balance of being at the pivot, the centre, the hub of all realms.

Dusk is a magical, mystical time. All goes quiet, birds settle, a coolness replaces the day's warmth, the wind abates and the earth breathes, in a gentle sigh, the incoming night. Take a moment to share in the peace of the transition between light and dark. If you can, go to higher ground, a place where the night is dark with little or no light pollution, and connect.

It helps to focus by setting a place aside which contains symbols and tokens, offerings to express your gratitude, water for nourishment, candles for light and fire energy. Ideas of how to incorporate the elements into your own celebration are here - Celebrating the 4 Elements.

Then look around you. You can do this formally by acknowledging the cardinal directions, east, south, west and north, adding in above and below, or just by looking. There is an exchange of energy whatever you do.

Now you may feel called to sing, chant, dance, read a story, meditate, observe or relax and be aware of whatever you see, hear, smell or touch. A change of temperature or a soft breeze, all are connections to your surroundings.

And when you are finished, you will know when intuitively, give thanks to all that you have connected to. Collect anything you have brought, the candles, symbols and tokens and return the place to how it was, so that you leave only footprints.

Now have a drink and something to eat. Nourish yourself.

Seven Sisters: The Pleiades is also known as the Seven Sisters in many cultures, including Nepal, Korea, Australian Aboriginal and Greek. There are many references to Seven Sisters in Ireland, from a range of hills, healing wells, plant names and 'real' and mythological people.

The Ojibwe people of North America believe they came from Bagone-giizhig "Hole in the Sky". They traveled in a space ship that lead the way to Earth on a Spiders web beam of light through the portal known as the 7 sisters star system. Denmark calls the Syvstjernen, the Seven Star, but to the Vikings they were Freyja's hens and several cultures refer to them as birds.

Ancient Sites: Ther are suggested links to alignments at an ancient ritual site at Lismullin, close to the Hill of Tara. Dowth, Co Meath, rock art includes the Stone of the Seven Suns. Dowth has the Irish name Dubad, meaning "darkness". Magic of the Land - Dowth and Dowth and Bru na Boinne (Newgrange),

At Lascaux, France, famous for it's cave paintings, dating from 15,000 to 17,000 years ago, this appears to be the Pleiades with dots representing the cluster.

Awakening of the Pilgrim