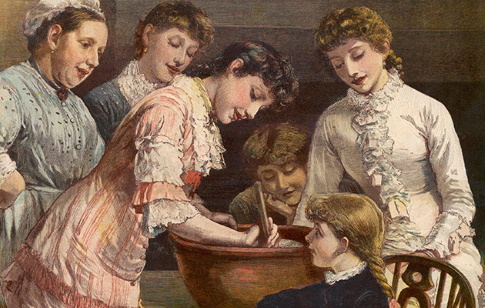 Stir-up Sunday, which falls on Sunday the 20th of November 2022, is an opportunity for a traditional get-together.

Stir Up Sunday is a tradition that harks back to Victorian times when the family would gather together to stir the Christmas pudding five weeks before Christmas.

I never knew it as Stir it Up Sunday yet the Plum pudding, as we called it, the Christmas Cake and the Mincemeat were always made five weeks before Christmas to give them time to mature.

We had the same tradition of the stirring of the Christmas pudding by each member of the family. We each made a wish and stirred the pudding mix three times. Everyone had to stir the pudding before it was steamed.

How did Stir it Up Sunday get its name?

The opening words of the Book Of Common Prayer, used on the last Sunday before Advent, reads:

"Stir up, we beseech thee, O Lord, the wills of thy faithful people,"

so the tradition stands that this is the day to get stirring!

Stir it up traditions

Christmas pudding would traditionally contain 13 ingredients to represent Jesus and his disciples.

It is traditionally stirred (while making a wish) by each member of the family from East to West, to remember the Wise Men that visited Jesus in the Nativity story.

The customary garnish of holly represented the crown of thorns. Be warned: the holly berry is very toxic, so instead adorn your Christmas pud with fake foliage!

Christmas pudding is a sort of cake, here is how it is made. There is a big dish on the table, as well as all the materials for making it. The bread is grated and the suet is chopped up very finely, the raisins are stoned when bought and we also get currants, spice, sultanas, candied peel, baking powder and a bottle of ale. Then all these are put in the dish and mixed together; every person who stirs the pudding has his chance to wish for any thing he likes.

Why is a lazy boy like a Christmas pudding? Because he needs a good stirring up.

For Christmas pudding traditionalists, this lighly spiced, fruity sponge will provide the perfect finish to your festive meal. The zesty fruit and nut mixture is soaked in brandy and orange liqueur ovenight, making it plump, juicy and full of flavour, before combining with the dry ingredients. You can then either steam the pudding in a pan or oven for several hours – trust us, it's worth the wait! After turning out, it can be kept for up to a year, before finally serving with our luxurious orange custard cream or vanilla custard or double cream.