Guy Fawke's Night originates from the Gunpowder Plot of 1605, a failed conspiracy by a group of provincial English Catholics to assassinate the Protestant King James 1 of England, who was also James VI of Scotland, and replace him with a Catholic Head of State.

The plot was centred around a group of Roman Catholics who had hoped for better treatment from the new monarch after 45 years of repression under the reign of Elizabeth I. They decided on drastic measures when things did not improve.

Warwickshire-born Catholic Robert Catesby and his friends planned to kill the King, his ministers and nobles by blowing up the Palace of Westminster during the State Opening of Parliament on 5th November 1605.

The plotters rented a house nearby and managed to smuggle 36 barrels of gunpowder - around 2.5 tons - into a cellar under the Palace ready to blow it up. Guy 'Guido' Fawkes, was to set the fuse.

The explosives were discovered with hours to spare after an anonymous tip-off, warning one peer to stay away. To this day the cellars under the Houses of Parliament are ceremonially searched before the annual State Opening.

Celebrated in the UK by lighting bonfires, burning of "Guys" and setting off fireworks.

Fireworks are used as they are powered by gunpowder, representing the explosives that were never detonated. 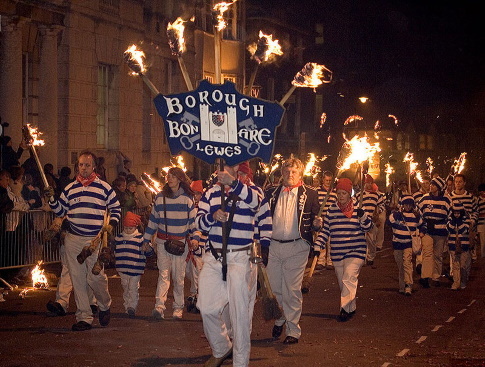 Towns in Kent and Sussex hold large festivals which are oganised by local Bonfire Societies. The event in Lewes is particularly well known and from the mid 18th century has been a focus against authoritarian laws and government. They often call for political reform with the unofficial motto of:

Lovely memories of fireworks at the old tree stump. Dad and brothers only allowed to go near them. Mum and I had sparklers! It was a great family night being out in the dark with just candles for light and baked potatoes for treats. A great way to welcome in winter. I remember the boys making a guy and trundling it along the road in a wheelbarrow, with other local children, for the fun of it. And it was exciting being allowed out in the dark.