A day to remember the dead. A day to celebrate the ancestors.

When I was young it was the day to go to the church and pray for the souls of the dead.

It involved going in to the church and saying plenary indulgences to free a soul from purgatory. Then it was out of the church, bless yourself from the water font and head back in to pray for and release another soul.

This was the only time of the year that one could say plenary indulgences, which meant the person prayered for was allowed out of Purgatory and on to Heaven. The rest of the year, the prayers were partial indulgences. Each prayer had the number of days worth of indulgences written after it and the soul accumulated these days off their time in Purgatory.

I once asked how did we know how long people were in Purgatory for, and, therefore how did we know when we had said enough prayers to release the person so they could go to heaven.

That didn’t go down with well at all and I was sent outside the classroom to stand in the corridor. This was a dangerous place in case you were found there by the head nun and might involve punishment of detention, extra homework or being caned on the hand in the office. After many times in the ‘no mans land’ of the corridor, I eventually learned not to ask questions.

I also remember one could also buy plenary indulgences. This was a way of raising money for the Church.

The modern date of All Souls' Day was first popularized in the early eleventh century in Saxony and was started by Saint Odilo of Cluny, who started an annual commemoration of all the faithful departed, to be observed with alms, prayers, and sacrifices for the relief of the suffering souls in Purgatory This happened in all the monasteries dependent on the Abbey of Cluny.

Another thing I remember about All Souls day was that each priest would say three masses on that day. I have memories of going to the church and being told that's the second mass said by the priest on that altar, it was being said to release a relative from Purgatory. My Mum would have given “a donation” for the mass to be said. As I didn’t want to stand in the corridor again, I never asked about this.

I’ve checked this out and discovered that this started in the 15th Century when the Benedictines instituted a custom of each priest offering three Masses on the Feast of All Souls. During World War II, with a great many of the churches destroyed and and with the great number of war dead, Pope Benedict XV granted all priests the privilege of offering three Masses on All Souls Day.

And what about Purgatory? 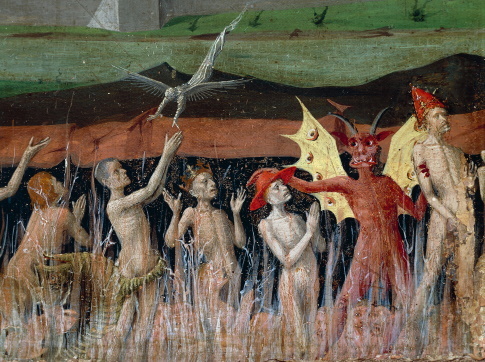 This depiction of Purgatory is taken from British Library collection of paintings.

"This detail from The Coronation of the Virgin (1454), an altarpiece by Enguerrand Quarton (c. 1410–1466), shows souls tormented by the flames of Purgatory – a place, in Catholic doctrine, where those who are not wholly bad or good are sent after death. While the wicked are condemned to Hell and the holy raised to Heaven, most faithful souls go to Purgatory, to be punished for their remaining sins and receive purification. In this painting, the souls of men of all ranks – king and commoners – are depicted with their hands raised in prayer. They are plagued by devils, but also comforted by angels reaching down to console them."

The emphasis on Plenary and partial indulgences has faded, but as far as I know, the Church says Purgatory exists.

It seems to have similarities to the Bardo in Buddhism. Do other beliefs have the equivalent of Purgatory?

Today I will light candles to remember the ancestors...

...and call their names out loud so that they may be remembered.