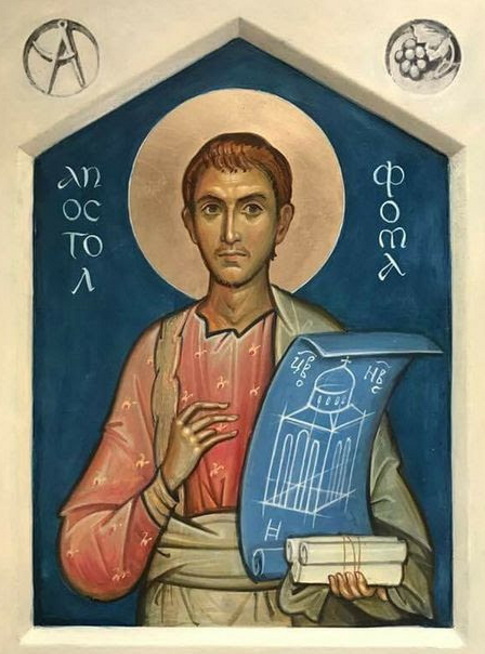 21 December was traditionally the feast of St. Thomas the Apostle; his feast is now celebrated on 3 July by the Roman Catholic Church. It was changed in 1969.

One of oldest Christian traditions in the world, Thomas Christians, started as a group in the area of Kerala in south west India. It is told that in the first century A.D, he traveled there as a missionary.

It is usually the shortest day of the year, and this was the start of the Christmas cleaning and baking. The day finishing our external preparations for Christmas. All the weeks before should have been more of spiritual preparation, the Advent preparations.

In Tyrol and in parts of Canada, the 21st December was "pie day". Meat pies were baked for the family, then cooled and frozen. They are saved for the feast of the Epiphany, and are thawed, reheated and eaten. Sausage rolls and the original mince pies, that had meat, come to mind.

In England, this was a day of charity, when the poor women went a "Thomasing" or begging. Wheat was cooked and distributed for the poor. They might be given money, apples or honey, which meant that they would have food over Christmas.

In some parts of central Europe the ancient customs of "driving demons away" occur and during the following nights (Rough Nights), there is much noise, cracking of whips, ringing of hand bells, and parades of figures in horrible masks.

This seems to be a common theme of this time of the year. Another version of this custom farmers will walk through the buildings and around the farmyard, accompanied by a son or one of the farm hands. They carry incense and holy water, which they sprinkle around as they walk. Meanwhile, the rest of the family and servants are gathered in the living room reciting the rosary.

This rite is to sanctify and bless the whole farm in preparation for Christmas, to keep all evil spirits away on the festive days, and to obtain God's special protection for the coming year.

In Austria, legend says that unmarried girls can see their future husband on St. Thomas Night.

Instructions of 'How to Dream About Your Future Husband' - climb into bed using a step-stool. Remove your shoes and spin around three times and then throw the shoes at your bedroom door, toes first. Then sleep with your head at the foot of the bed.

Also, if a single woman on St. Thomas Day can pick out a young rooster from among a brood of sleeping chicks, she will soon obtain a husband, or see him in her dreams.

There is also the English tradition of sleeping with a peeled onion wrapped in a handkerchief under your head...