Thanks to Orkrneyjar - Sow Day - slaughtering the sacred boar? for some of this information.

One Yule tradition in the Northern Isles had distinct parallels with an ancient custom found in Norway.

On 17th December, a day known locally as Sow Day, every family that kept swine would slaughter a sow for Yule. 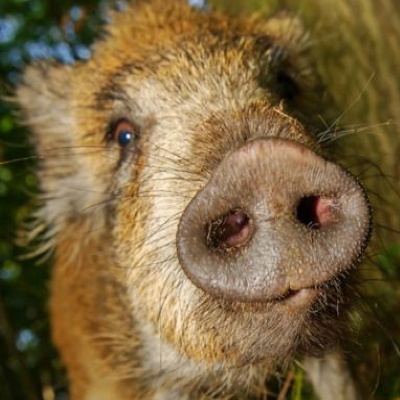 Pork is a traditional Yule dish in Norway - probably a reminder of the time when the boar, an animal sacred to Freyr, the Norse god of Yule and fertility, was sacrificed at Yule and it's flesh eaten as part of the feast. The boar represented the spirit of abundance and prosperity...

It's sacrifice at the darkest time of the year was thought to help to ensure bountiful crops the following harvest.

It is also possible that the boar represented the sun.

In Scandinavian myth, Freyr possessed a magical gold boar named Gullinbursti (Golden Bristles). This creature was able to run as fast as any steed and glowed with a golden light that could drive away shadow and turn night into day.

The solar attributes of this incredible beast, created by the dwarves Brokk and Eitri, are clear. The midwinter sacrifice of a boar could also be seen to symbolise the death of the old sun, and the rebirth of the new.

The boar also had a role in the swearing of sacred oaths.

On Yule Eve, the best boar in the herd was brought into the hall where the assembled company laid their hands upon the animal and made their unbreakable oaths. Heard by the boar, these oaths were thought to go straight to the ears of Freyr himself.

Once the oaths had been sworn, the boar was sacrificed in the name of Freyr and the feast of boar flesh began.

The most commonly recognised remnants of the sacred boar traditions once common at Yule has to be the serving of the boar's head at later Christmas feasts.