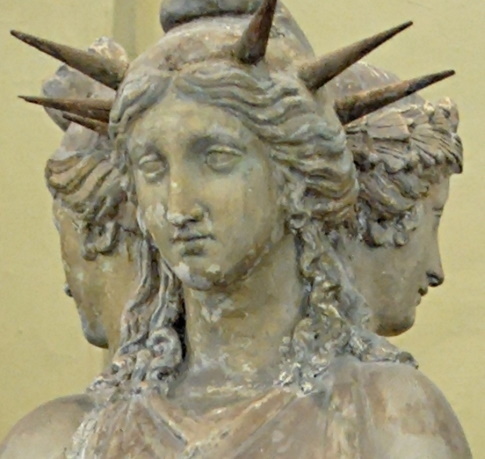 Hecate was the Greek goddess of three paths, guardian of the household, protector of everything newly born, and the goddess of witchcraft.

She was known to rule the passages of life and transformation, birth and death. Her animals were the toad, the owl, the dog and the bat.

In current times, she is usually depicted as a “hag” or old witch stirring the cauldron.

Hecate is the goddess of the twilight, who sees everything that happens in the shadows.

Known for her divine wisdom, Hecate helped Demeter search endlessly for Persephone when Hades abducted Hecate, taking her to the Underworld.

Hecate's Night is the night that she roams the earth with her hounds.

This is also the night that new initiations are made for Witches who follow her.

Hecate’s Supper is left out on the steps of her followers dwellings, usually consisting of honey and mushrooms. Hecate then blesses those inside.

Shrines to Hecate were placed at doorways to both homes and cities with the belief that it would protect from restless dead and other spirits.

Likewise, shrines to Hecate were created at three way crossroads. Food offerings were left out for Hecate on her night. Offerings were also at the new moon to protect those who did so from spirits and other evils.

Hecate appears as the Three Witches senior and encourages them in the destruction of Macbeth ....

Around 160 AD, the alchemists (or theurgist), authors of the Chaldean Oracles, linked Hecate to the Cosmic Soul in Plato’s Timaeus, whose form was also a celestial ‘X’ (there is a whole chapter dedicated to the ‘X’ symbol in Orion’s Door).

The point here is that Hecate, as the ‘triple’ goddess, whether we see her as a personification of the moon, or the torch carrier at the gates of Hades, is the goddess of the ‘darkness’.

Hesiod, the Greek poet (750 and 650 BC), one of the authors credited with Homer for establishing Greek religious customs, described Hecate as a ‘primal cosmic force, one that can be called upon when worlds cross’.

Like the ‘Three Norns’, or the ‘Three Weird’ (Wyrd) Sisters found in Runic magic, all can be ‘drawn down’ at important dates on the pagan wheel at the equinoxes and solstices.

Hecate’s wheel symbolism also relates to the ‘core star’, or ‘soul’, said to be at the centre, interacting with what the Gnostics called the ‘fire serpent’ and primordial energy that creates us.

What I see with Hecate’s wheel is a ‘celestial compass’, tuned to the stars (especially Orion) and the moon in the darker days of the year.