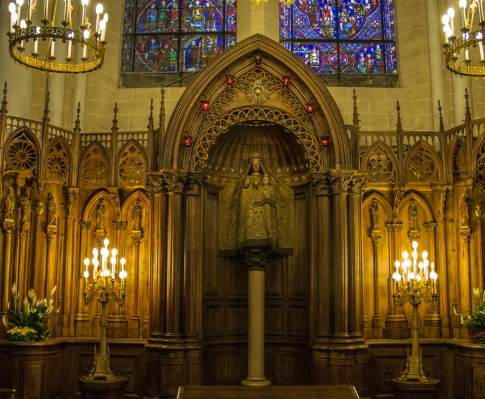 Our Lady of the Pillar is a wooden statue decorated with gold; it is about fifteen inches high and depicts the Virgin Mary with the Infant Jesus, who is holding a dove in his hand. The original statue was destroyed by fire in 1434. The present statue dates from the mid-fifteenth century.

The crown adorning the head of the statue was made in forty-four days by thirty-three workmen; in it there are 2,836 diamonds cut triangularly, 2725 roses, 145 pearls, 74 emeralds, 62 rubies and 46 sapphires. The crown of the Infant is identical with that of the Virgin, except in size.

The pillar is draped in a Manto, a skirt-shaped cloak. The use of mantos began in the early sixteenth century.

The first apparition of Our Lady

Saint James the Greater, one of Our Lord's twelve apostles, travelled in Spain and Portugal to preach the faith to those who lived in spiritual darkness. Although he worked tirelessly, and suffered greatly in his labours, his early efforts in the region bore little fruit.

Saint James was having a hard time evangelizing the northern region of Zaragoza. One night, as he prayed asking help for his plight, he suddenly beheld a great light in the midst of which he saw Our Lady surrounded by a multitude of angels.

The Blessed Virgin Mary was still living and in Jerusalem and was aware of Saint James' distress. To console the saint, she miraculously bi-located hundreds of miles to appear to Saint James while he was praying along the banks of the Ebro River in Zaragossa.

When the saint looked up from his prayers, the Blessed Virgin stood before him upon a pillar supported by angels, and she told Saint James that the people of Spain would possess a great faith in the future due to his sacrifices. She gave St. James her effigy, requesting that he build a chapel there in her honour. Saint James complied, constructing the first church in Spain.

This event is the first known and earliest recognized apparition of Our Lady, and one which took place while she was still living on earth.

Remembrance of the Apparition

In remembrance of the apparition of Our Lady, the people of Zaragossa made a vow in 1642 to honour Mary as the patroness of their city.

More than a hundred years ago, when Zaragossa was besieged by a large French army, a few men and women, with sixteen cannon and some shotguns, defended the town for two months. The French eventually defeated the defenders and sacked the town but they did not dare touch the statue. One of the generals was an exception, boldly taking one of the jewels to carry home to his wife, offering the Virgin in exchange a valuable gift. In his next battle, the general's leg was taken by a cannon ball.

During the Civil War of the 1930s, two aerial bombs were dropped on the shrine church, but neither exploded. Those bombs now hang on the shrine wall.

No one is allowed to touch the statue except for the four priests assigned to it's care and new born infants, who can be lifted up to touch the image of their heavenly Mom. 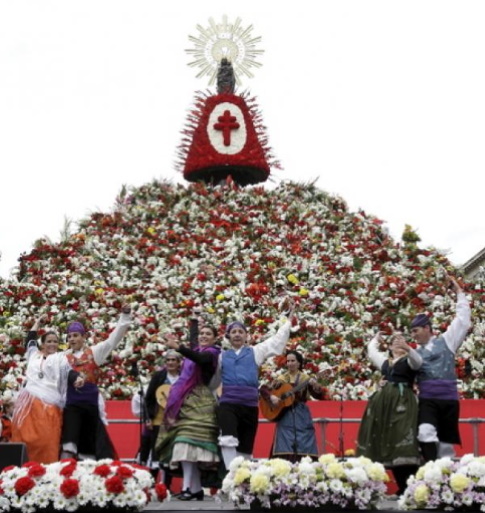 Zaragoza celebrates a week of celebrations. Festivities peak on 12th October, the Día de Nuestra Señora del Pilar, when a veritable mountain of flowers is piled up around the Virgin's image from the basilica, brought out onto Plaza del Pilar, by hundreds of thousands of devotees, many in colourful regional or national dress.

12th October 1492, the feast of the Virgin of the Pillar, is the day Christopher Colombus first sighted American land, and when the first Mass in the Americas was celebrated.