12th December is the feast day of Our Lady of Guadalupe who holds a special place in the religious life of Mexico and is one of the most popular religious devotions.

Her image has played an important role as a national symbol of Mexico. According to tradition, Mary appeared to Juan Diego, who was an Aztec convert to Christianity on 9th December 1531. Juan was walking by a hill called Tepeyac when he heard beautiful music like the warbling of birds.

A radiant cloud appeared, and within it stood an Indian maiden dressed like an Aztec princess. The lady spoke to him in Nahuatl, his own Aztec language.

Our Lady requested that a shrine to her be built on the spot where she appeared, Tepeyac Hill, Mexico City. She sent him to the bishop of Mexico, a Franciscan named Juan de Zumarraga. However, the bishop demanded a sign before he would approve construction of a church. 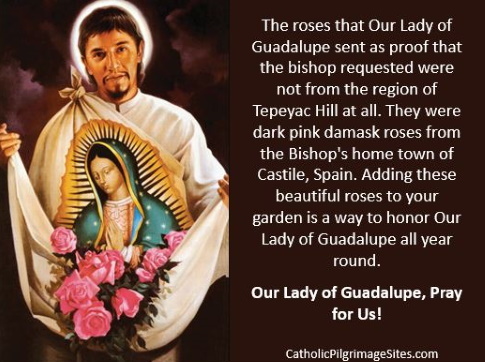 Mary appeared a second time to Juan Diego on 12th December, and asked him to collect roses.

In a second audience with the bishop, Juan Diego opened his cloak, letting dozens of roses fall to the floor and revealing the image of Mary imprinted on the inside of the cloak.

The cloak was made of poor quality cloth that should have deteriorated within decades.

Instead, 483 years later, the cloak shows no signs of decay.

The image is now venerated in the Basilica of Guadalupe.

In the image, she stands as she appeared, a native princess with high cheekbones. Her head is bowed and her hands are folded in prayer to God. On her blue cloak, the stars are arranged as they appeared in the morning darkness at the hour of her first apparition.

Under her feet, is a great crescent moon, a symbol of the old Aztec religion.

On October 12, 1945, Pope Pius XII, decreed Our Lady of Guadalupe to be "Patroness of all the Americas."

Her feast day is 12th December, and it is a Holy Day of Obligation in Mexico.