This is the time when autumn wheat seeding was completed, and the annual slaughter of fattened cattle produced "Martinmas beef".

St. Martin’s Day was an important medieval autumn feast, and each country has its own customs and feasts. Beef, pig, goose, hen or duck were killed depending on the local customs and means of the people. Historically, hiring fairs were held when farm labourers would seek new posts.

St. Martin was born in Hungary in 316. He was the son of a pagan army officer who moved with his family to his father's new post in Pavia, Italy. At the age of 10, he took lessons at the local church. Several years later, his love of God was so intense that he wanted to become a hermit. However, as the son of an army veteran, he was compelled to go into the service when he was 15 years old. 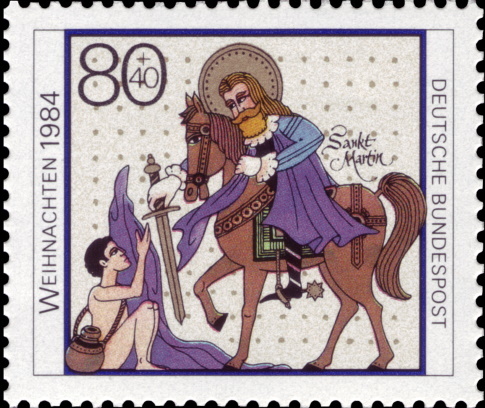 His military career took him to a post in Amiens, France. There, during the bitterly cold winter of 337, he was approached by an almost-naked beggar. Martin immediately sliced his cloak in two and wrapped half of it around the shivering vagrant. That night, he dreamt of Jesus wearing the half-cloak and saying to the angels,

"Here is Martin, the Roman soldier, he has clothed me."

Following this dream,he immediately sought to be baptized.

In 339, Martin requested and was given his discharge from the army.

Martin lived a while in Italy and Dalmatia before going to Poitiers where Bishop Saint Hilary took him as a disciple.

He later had another dream which called him back home to Hungary, where he converted his mother and many others.

After Hungary Martin’s travels took him back to Italy.

Bishop Saint Hilary knew that Martin preferred to live the monastic life, so he gave him some land on which Martin founded the first monastic community in Gaul. He lived there for 10 years, preaching and reputedly performing many miracles.

Then around 371, Tours chose him as it's third bishop. He lived in a cell by the church but soon retreated from the city and its distractions to Marmoutier, where he founded yet another great monastic centre which trained many of the bishops of the time. Martin lived privately as a monk; publicly, he ardently discharged his episcopal duties.

After his death, his successor, Saint Brice, built a chapel over his grave. This was replaced with a basilica and today his shrine attracts thousands of pilgrims.

He is the patron saint of France and the Pontifical Swiss Guards. Also patron saint of children and the poor, wool weavers (because he divided his cloak), alcoholics (being helpful on the road to recovery), patron of horses, cavalry and equestrians and also geese, innkeepers and wine makers.

Legends - geese, walking on water in Wexford, sheep and goats.

The goose became a symbol of St. Martin of Tours because of a legend that when trying to avoid being ordained bishop he had hidden in a goose pen, where he was betrayed by the cackling of the geese. St. Martin's feast day falls in November, when geese are ready for killing.

A legend from Co. Wexford says that the fishing boats were out on the morning of one 11th November, when an apparition of St Martin was seen walking on the waves. He admonished them to put their oars into the water and return to their harbours. All those who ignored his warning perished in a storm that came up in the afternoon. Since then, no Wexford boat would put out to sea on St. Martin’s Day.

It was also the custom in Wexford on 11th November that if a sheep or goat was ill and seemed likely to die, the farmer would put a slit in one ear and devote the animal to the saint. If it recovered, it would be killed and eaten on a future St. Martin’s Day. It would not be sold in the interim - not even for ten times it's value.

St. Martin is the uncle of St. Patrick and that he was the one who gave Ireland’s patron saint his monastic habit and his tonsure.

According to one resource, Patrick entered the monastery at Marmoutier, where he remained until his uncle died in 397. To honour his uncle, St. Patrick killed a pig on the eve of his feast day and offered it to the monks at Marmoutier, should they be inclined to come for it.

From that point on, it became the custom to sacrifice an animal on Martinmas and this is where the Martinmas pig is said to have originated.