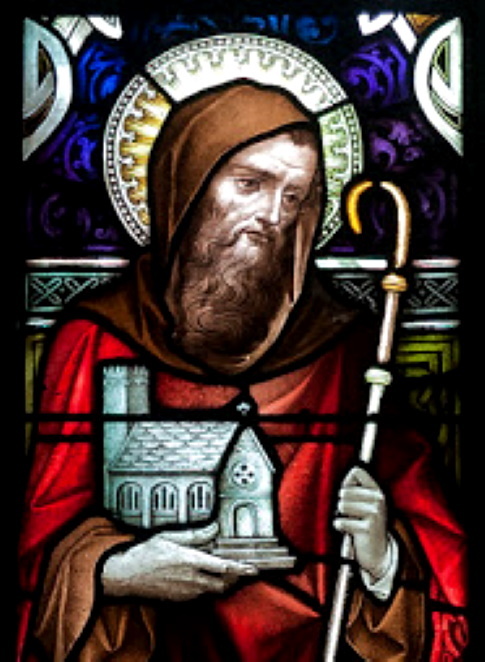 Saint Grellan is an Irish Saint and patron saint of the Kelly and Donnellan clans and of the parish of Ballinasloe, Co. Galway.

According The Life of St. Grellan, he lived during the 5th century, the time of St.Patrick.

Duach Gallach, a kimg of Connach, granted Grellan the site to build his church after Grellan brought back to life by baptism Duach Gallach's stillborn son, Eoghan Sriabh.

Achadh Fionnabhrach has been ever since called Craobh Ghrealláin (Irish for 'the branch of Grellan'), named after the branch which king Duach and St. Patrick presented to St. Grellan, in token of possession. The king also ordered that seven garments should be given from every chieftain's wife as a tribute to the young cleric.

After this Grellan eventually settled and established a church at Cill Cluaine, Kilclooney.

The area was invaded by the Gaelic tribe of Colla da Chrioch from Oriel, led by the semi-legendary figure Máine Mór who was accompanied by his father Eochaidh Ferdaghiall, and his two sons Breasal MAc Máine Mór and Amhalgaidh.

His battalions descended on the territory and plundered the country. Acting as an intermediary, Grellan negotiated a peace between the parties. To consummate the peace, Cian d’Fhearabh Bolg organised a feast to which Amlaff was invited but subsequently taken hostage.

Amlaff was now the bargaining power the Firbolgs held over the Gaels. While in captivity however, Amlaff managed to offend a Firbolg official through a romantic entanglement with his wife. Amlaff was killed, and with him died the Firbolg's leverage against the Gaels. With the Gaels expecting a truce, Cian decided to catch them off guard with a surprise attack.

Grellan, who was standing at the door of his church, saw the build-up of the Firbolg's weapons. As he was the guarantee between the two factions, this put him in a precarious situation. Legend states that he prayed to God, who caused the Firbolgs to be swallowed into the earth at the bog of Magh Liach during battle with the Gaels.

St. Grellan's Crozier, or Bachall Grealláin, was given to the Uí Maine (Hy Many) with the territory,and was borne in their standard on the battlefield. This crozier was in existence up to the early 19th century.

The history of the Baċall Ġreallán is recounted by Patrick Egan in his history of "The Parish of Ballinasloe". From the time of the saint it was a treasured relic of the Hy Many, until it was conveyed into the possession of Shane Crannelly as hereditary keeper of the relic, according to John O'Donovan writing in Ballinasloe in 1837.

At this time, the Baċall was used as a talisman in depositions. The following year Thomas O'Curry arrived in the area to learn that the Crozier of St. Ġreallán had been condemned and discarded. Crannelly's kin had inherited the staff, attended church, heard Father O'Connor's sermon against their family for charging fees to swear oaths on the Baċall; after which the treasure disappeared.

"a treasured relic from the dawn of Christianity in Ireland, though handed down with loving care through thirteen centuries, was in the end put to base use, before finally disappearing from sight, perhaps forever."