Puck Fair, Aonach an Phoic, meaning “Fair of the He-Goat”, is one of Ireland’s oldest fairs. It's origins are lost in the mists of time, there is no written record of when it was first held.

This photograph of the bronze statue in Kilorglin is from Wikipedia. 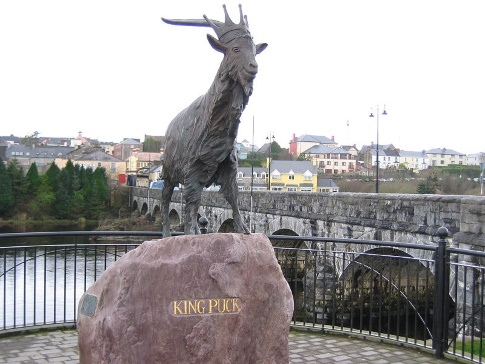 The Fair was officialy recognised by James I in 1603 and it was probably already ancient at that time.

It is an annual three day fair, held each year in Kilorglin, Kerry.

Each year a wild male goat is captured from a mountain and brought into town where it is raised on a platform high above the crowd and there a young girl, who has earlier been crowned ‘Queen of Puck’, crowns the goat King. There is a coronation parade and King Puck rules the town until his dethronement on the festival’s final day, when he is returned to the wild.

There are a few theories regarding the fair. The first theory simply suggests that is was a pre-Christian celebration of a fruitful harvest and that the male goat or “Puck” was a pagan symbol of fertility, like the pagan god Pan.

The three days are full of horse and cattle fairs, trade stalls and family events, all types of entertainment, with music and circus workshops, traditional Irish music and dancing, night-time concerts and pipe bands. There are also lots of fun activities for children including face-painting, clowns, puppet shows and fancy dress.

The end of Puck Fair is marked with a great fireworks display, the perfect ending for a perfect festival.

The welfare of the goat has been a concern in recent years and the organising committee have a policy statement concerning this - and a vet at the ready should anything ontoward occur.