He was a monk, Bishop and hermit with the monastaries of Melrose and Lindisfarne.

Some say that he was an Irishman named Mulloche, great-grandson of the High King Muircertagh of Ireland because, according to Moran, citing documents in Durham Cathedral, the rood screen bore the inscription: Saint Cuthbert, Patron of Church, City and Liberty of Durham, an Irishman by birth of royal parentage who was led by God's Providence to England. The cathedral's stained glass windows, which had been registered but destroyed during the reign of Henry VI, depicted the saint's life beginning with his birth at Kells in Meath, Ireland.

As a youth Cuthbert worked his first miracles. Even the elements obeyed him. Thus, he once by prayer changed the direction of a strong wind on the river, and the boats with monks who were carrying timber, scattered all over the river, managed to moor on the land very easily.

One night while still a boy, employed as a shepherd, he had a vision of the soul of Aidan of Lindisfarne, being carried to heaven by angels, and later found out that Aidan had died that night. His Vision included an extremely beautiful, unearthly singing of angelic choirs and young Cuthbert was so impressed by this vision that he immediately and firmly decided to devote all his life to the service of the Lord and become a monk.

Around 662 he was made Prior at Melrose Abbey and around 665 went as Prior to Lindisfarne where he grew to love the wild rocks and sea, and where the birds and beasts came at his call.

Then for eight years, beginning in 676, Cuthbert followed his solitary nature by removing himself to the solitude of the isolated, infertile island of Farne, where it was believed that he was fed by the angels. There he built an oratory and a cell with only a single small window for communication with the outside world. In 684 he was made bishop of Lindisfarne, but by late 686 he resigned and returned to his hermitage on Farne as he felt he was about to die. He died on 20th March 687 AD.

After his death he became one of the most important medieval Saints of Northeren England, with a cult centred on his tomb at Durham Cathedral. Cuthbert is regarded as the patron saint of Northumbria. His feast days are 20th March , also 31st August and 4th September.

When the Vikings began to raid Northumbria they burned the monastery at Lindisfarne in 793 AD and in 875AD. More Viking attacks led the monks to take up the body of their saint and the relics of many others, and the book known as The Lindisfarne Gospels and begin a journey around Northumbria. After many journeys they arrived at Chester-le-Street where they remained for 113 years. Another threat led them to move to Ripon and on the return they settled at Durham in 993 AD.

St Cuthbert`s shrine attracted many visitors and the Community of monks or canons who looked after it received many gifts of land, and became a powerful force in the North. 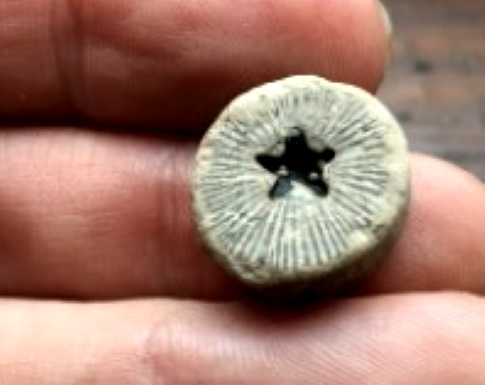 Fossilised crinoid columnals extracted from limestone quarried on Lindisfarne, or found washed up along the foreshore, which were threaded into necklaces or rosaries, became known as St. Cuthberts beads.

While on a visit to Lindisfarne in 2015, we had a search on the beach but we weren’t lucky enough to find any Cuthbert beads.

St Cuthbert and the eagle

On the way home after an especially arduous preaching tour on foot, Cuthbert’s young companion was relieved to hear him raise the subject of food.

“I have been thinking about that” said the lad anxiously. “It’s a long way back. We brought nothing to eat, and made no inquiries about Inns.”

Cuthbert glanced at him. “You must learn to have faith, my boy. Look there,” he added, pointing to an eagle flying above the river. “Even she might feed us, if God wished it.”

Presently, they saw the eagle standing on the bank with something at her feet.

“Run and see what she has for us” said Cuthbert.

The lad soon came back with a handsome fish. “What!” cried Cuthbert. “Have you not left half for our maidservant?”

When this was mended, they continued their journey.

Almost at once, they came to a village, where Cuthbert had the fish broiled, and shared it with everyone.