Fiacre was born in Ireland at the end of the sixth century.

Fiachra is an ancient Irish name. It has been interpreted to denote "battle king"or to derive from fiach ("raven").

He was raised in a monastery where he became a monk and studied herbal medicine. He founded his hermitage near St. Fiachra’s Well at Cill Fiachra (Kilferagh), Sheastown, near Bennetsbridge, Co Kilkenny. Crowds flocked to him for his cures.

He sailed to France in search of greater solitude.

When he arrived at Meaux in 628, the bishop St Faro, granted him land at Brogillum (Breuil), in the province of Brie. Faro offered Fiacre as much land as he could turn in a day. Fiacre, instead of using a plough, turned the top of the soil with the point of his staff. He then cleared the ground of trees and briers, made a cell for himself, a garden for herbs and vegetables, a chapel and a hospice for travellers.

In time this developed into the village of Saint-Fiacre. It is situated in Seine-et-Marne départment of the Île-de-France region. Once again, the crowds flocked to him in search of cures. He died 18 August, 670.

Saint Fiacre's relics were preserved in his original shrine in the local church on the site of his hermitage, garden, oratory, and hospice, but later transferred in 1568 to their present shrine in Meaux Cathedral near Saint-Fiacre because of fear that fanatical Calvinists endangered them.

Fiacre gained a reputation and is invoked for the healing of fevers, tumours, cancers, as well as fistula and venereal diseases.

Saint Fiacre is the patron saint of growers of vegetables and medicinal plants, and gardeners in general, including ploughboys. 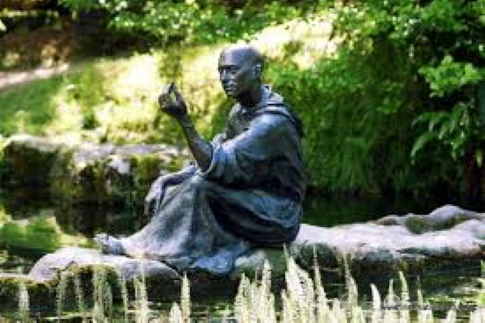 In 1999 a garden in his honour was made at the National Stud in Kildare and is much visited by tourists.

Fiacre is also the patron of taxi-drivers.

The Hôtel de St-Fiacre, in the Rue St-Martin, Paris, in the middle of the seventeenth century was the first to hire out coaches. The sign of the inn was an image of the saint, and the coaches in time came to be called fiacres.

In art, Saint Fiacre is portrayed as an abbot carrying a shovel. He might also be shown in a Benedictine habit with a heavy staff, interceding for the sick, with pilgrims in the background, and a basket of vegetables in the foreground.

He is venerated at Kilfiacha, Ireland, and Saint Fiacre at Seine-et-Marne, France.