Did you miss Michaelmas on 29th September? Not to be too concerned because you get a second chance on 10th October. After the calendar reform of 1752, some activities traditionally associated with September moved forward eleven days to 10th October, which is sometimes called 'Old Michaelmas Day'.

with additional information from Bernadette Mac. 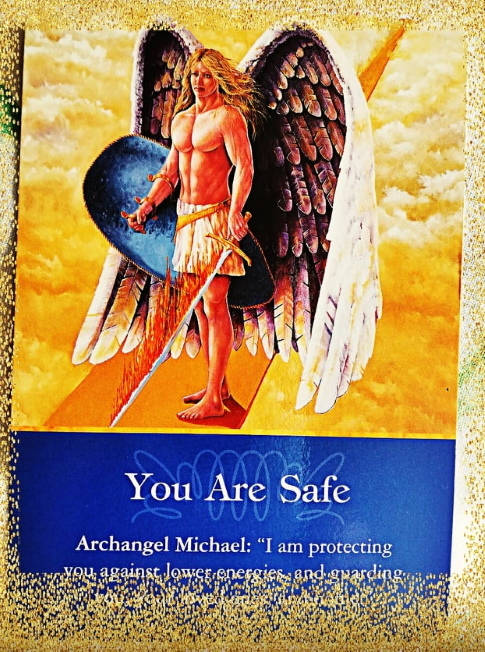 Hi everyone the Feast of Michael today. I thought it would be nice to post his angel card today. You are safe.

Archangel Michael: I am protecting you against lower energies and guarding your loved ones and home. Let go of worries as I am surrounding you and your loved with a powerful loving light.

This light repels lower energies and attracts loving experiences. Focus on this light and love - instead of Fear and you will attract that object of focus.

Know now that you were safe at all times and my protection is flawless.

Michael will escort away lower energies of fear. If you become worried or anxious mentally ask Michael to bring you peace. You can also ask that he clear your home, office, vehicle or community of toxic energies. After you call upon Michael, you likely notice a warm feeling. That's because he had a fiery warrior spirit. You can ask Michael to stay with you continuously as he's able to be with everyone who calls upon him simultaneously.

Archangel Michael blessings to you all today. Bernadette Mac

Michaelmas, the feast day of the Archangel Michael, is traditionally observed throughout Ireland on the 29th September.

The Archangel St. Michael is the patron saint of the warrior, who Catholics have designated as the protector of those who strive to preserve security, safety and peace. Male children born on, or near, Michaelmas were often called Michael or Micheál in honour of the saint.

Michaelmas is linked with the shortening of days as autumn gathers apace the colder days begin.

Michaelmas is a special time of celebration and reunion. The Michaelmas Goose was slaughtered and eaten in honour of the saint.

However, John O’Hanlon, in his 1870 book Irish Folklore, maintained that a sheep used to be slaughtered by those who could afford it, while he also states that, on Michaelmas, it was ‘ordained by law that a part of the animal must be given to the poor. This is said to have been done, in order to perpetuate the memory of a miracle wrought by St Patrick, through the assistance of that Archangel.’

Domestically the woman of the house started slaughtering the fowl at Michaelmas, with the first goose slaughtered becoming the “Michaelmas Goose”, the day marked the beginning of the fox and hare hunting seasons, and, in many parts of Ireland, the end of the fishing season.

Goose Fairs are still held in some English towns,. The most famous Michaelmas fair is the Nottingham Goose Fair which was originally held in September on St Matthew’s Day, but moved to early October in 1752. The Goose Fair probably got its name from the hundreds of geese which were driven there from all over Lincolnshire to be sold in Nottingham. Most historians agree the fair probably started just after 1284 when the Charter of King Edward I referred to city fairs in Nottingham.

Michaelmas also acted as a marker for certain civic and domestic activities. In many Irish towns, including Drogheda, Dublin and Kilkenny, the Mayor took office on Michaelmas Day.

As part of the celebrations in Kilkenny a bull was baited* at a bull-ring situated near Saint Francis Abbey. Bull-baiting typically involved a bull being attacked by dogs, while trapped in an area, often a pit of some kind.

In some areas Michaelmas was one of the two annual rent days, previously known in Ireland as Gale Days, (the other being the 25 March). Traditionally, on these days, debts were paid, leases started, and servants were hired. It is a time to arrange or settle contracts, a day to conduct legal transactions t also marked the beginning of legal and university term.

The Puca and the Devil

Otherworldly creatures were active at Michaelmas, In Ireland children were warned not to eat blackberries after Michaelmas Eve, as it was believed that the púca flies through the county spitting on the blackberries on that night. The Puca is a shape-shifting spirit.

In England Old Michaelmas Day used also to be called “Devil Spits Day”, as it is the last day that blackberries should be picked. It was said that the Devil was kicked out of heaven on St Michael’s Feast Day, falling from the skies onto a blackberry bush. He then cursed the fruit, scorching them with his fiery breath, and either stamped on them or spat on them, thus ensuring they were unfit to eat! Legend has it that he renews his curse annually on Michaelmas Day and therefore it is very unlucky to gather blackberries after this date.

Michaelmas was also a time for divination; a Michaelmas cake was baked on the night of Michaelmas with a ring mixed through the dough, exactly as is still done on Hallowe’en. Portions of the cake were then distributed amongst any unmarried persons who were present, with the belief that whomever discovered the ring was destined to be wed before next Michaelmas.

Pilgrimages, Daisies, a Parade and Curfew

Pilgrimages were undertaken to holy wells associated with St. Michael and pilgrims would finish their rounds by sipping the well water. It was a custom that people greet each other on that day with

"May Michaelmas féinín on you."

This is the is the time of the year when the Michaelmas daisy flowers. Michaelmas daisies were first introduced into Britain from North America around the beginning of the eighteenth century.

The Michaelmas Daisies, among dede weeds,
Bloom for St Michael’s valorous deeds.
And seems the last of flowers that stood,
Till the feast of St. Simon and St. Jude.

In the language of flowers, the Michaelmas-daisy symbolizes a farewell or a departure. The act of giving a Michaelmas Daisy symbolises saying farewell, perhaps as Michaelmas Day is seen to say farewell to the productive year.

In Co. Waterford, Ireland , after a parade through the town of Tramore, people went into the sea carrying an effigy of St. Michael - Micilín - the effigy represented the end of their income for the end of the fishing and tourism season.

Michaelmas used to be the day the winter night curfew to begin – the first hint that winter was on the way. Curfew took the form of a tolling of the church bell, usually one strike for each of the days of the month that had passed in the current year and was generally rung at 9pm.

If Michaelmas Day be bright and clear there will be two ‘Winters’ in the year.

On Michaelmas night by right divine
The goose is chosen to be the swine.

On Michaelmas Day the Devil puts his foot on blackberries.

Eat a goose on Michaelmas Day, Want not for money all the year.

He who eats goose on Michaelmas day
shan’t money lack for debts to pay.