Finbarr was the founder of the city and See of Cork.

He was born in Templemartin, near Bandon, the son of Amergin of Maigh Seóla, a skilled metalworker, who moved to Munster from Galway to find work and married a slave girl.

Finbarr was originally named Lóchán, He was educated at Kilmacahil, Kilkenny, where the monks named him Fionbarr (white head) because of his light hair.

He went on pilgrimage to Rome with some of the monks, visiting St David in Wales on the way back.

After completing his education, he returned home and lived for some time as a hermit on an island in the small lake, Loch Irce. The island is now called Gougan Barra (the little rock-fissure of Finbarr) there is now a beautiful replica of Cormac's chapel has been recently been erected in his honour. The hermitage is one of the best preserved monuments in the Cork Diocese. The walls still stand and are 14 feet thick. There are eight cells, each seven feet wide by ten feet deep. The courtyard is fifty feel square. I visited there in 2015 and it was well worth a visit.

In 606 Finbarr founded a monastery at Corcach Mór na Mumhan (the Great Marsh of Munster), now Cork City, where he gathered around him monks and students. He settled for about the last seventeen years of his life. This became an important centre of learning, giving rise to the phrase Ionad Bairre Sgoil na Mumhan. "Where Finbarr taught let Munster learn", is the motto of today's University College Cork. 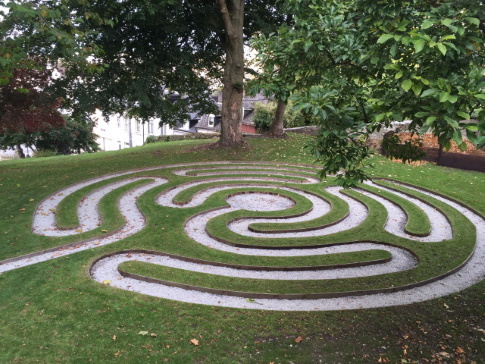 On 19th October 2015 the Bishop of Cork, Cloyne and Ross, the Right Rev'd Dr Paul Colton, dedicated a new labyrinth installed in the southeast corner of the grounds of Saint Fin Barre’s Cathedral, Cork. It is intended to be used for prayer, meditation and contemplation for pilgrim and tourist alike.

Among many wondrous tales associated with him, is one in which he is led by an angel from the source of the river Lee at Gougane Barra to its marshy mouth, where he founded his most important monastery, ‘out of which grew the see and the city of Cork’. Over the years, the area became so prosperous, that it attracted the attention of Viking sea pirates, who raided and burned the infant city, but returned in later years to settle there and trade.

Legend has it that Finbarr banished the great serpent Lú from the lake here, and in doing so, Lú created the channel which is now the river Lee.

Many miracles are attributed to Finbarr. Legend has it that his hand took on a visible radiance that caused him to wear a glove for the rest of his life.

They say that the sun did not set for two weeks after he died.

St. Finbarr died at Cell na Cluaine Cloyne in 633 A.D. and his remains were taken to Cork to be enclosed in a silver shrine in what is now St. Finbarr’s Cathedral