St. Bartholomew, a doctor in the Jewish law, was a dear friend of St. Philip the Apostle.

In St. John's Gospel, Bartholomew is known by the name Nathaniel (the liturgy does not always seem aware of this identity). He hailed from Cana in Galilee, was one of the first disciples called by the Lord. On that initial meeting Jesus uttered the glorious compliment:

"Behold, an Israelite indeed in whom there is no guile!"

After the Resurrection he was favoured by becoming one of the few apostles who witnessed the appearance of the risen Saviour on the Sea of Galilee (John 21:2).

Because Bartholomew was a man "in whom there was no guile," his mind was open to the truth. He went willingly with Philip to see Christ, and recognised the Saviour immediately as the Son of God. Following the Ascension he is said to have preached in Greater Armenia , Asia Minor, and northwestern India. When he was in Greater Armenia preaching to idolaters, he was arrested and condemned to death. While still alive, his skin was torn from his body.

St. Bartholomew's holy body was first taken to the island of Lipari (north of Sicily), then to Benevento, and finally his relics to Rome in the Church of St. Bartholomew-on-the-Tiber, or San Bartolomeo all'Isola (St. Bartholomew's on the Island), where it is honoured by the faithful with pious devotion. 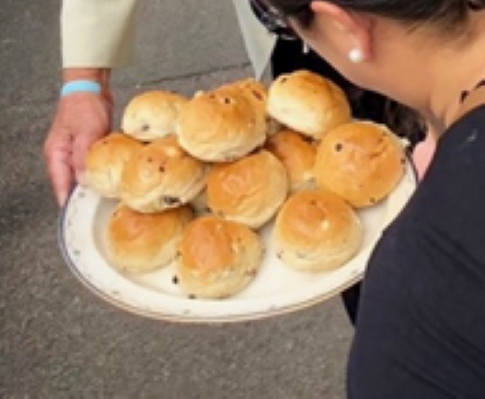 Each participant receives a currant bun, while the attendants are each given a St Bart's Biscuit, which has an imprint of the hospital's ancient seal.