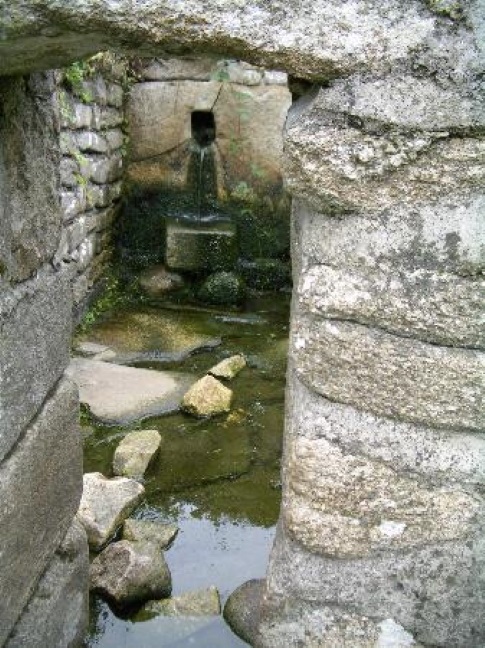 Each year on the Sunday before 25th July, thousands gather, from many parts of Ireland and
abroad, at St Mullins, beside the River Barrow in Co. Carlow, to take part in the historic pilgrimage which now consists of Holy Mass at the penal altar, to drink water from the holy well and visit the graves.

Many say that for generations hundreds of “cures” have taken place at this hallowed spot and people still go there to pray for help in times of distress and ailment.

The Holy Well dates back to the time of St. Moling and there is no doubt that the present pilgrimage is part of the ancient custom of wading in the waters of the mill-race when the pilgrimage lasted for several weeks.

St. Moling 614–697 also named Moling Luachra was descended from the race of Cathaoir Mor of the Leinstermen, Monarch of Erin.

He is said to have been the illegitimate son of a wealthy landholder called Faelán the Fair, son of Feradach, and of Faelán's sister-in-law, Émnait. Ashamed of the pregnancy, Émnait fled home, traveling by night. She arrived at Sliabh Luchra in the midst of winter when the snow was said to be so deep that it reached men's shoulders. She gave birth to a son in the snow, whereupon a company of angels arrived and melted the snow around the child for thirty feet on every side. Émnait intended to kill the child but a white dove spread its wings around the baby, keeping him warm and protecting him from attack throughout the night. Both mother and child were rescued by two monks Brénainn and Collanach his priest, who took them in. Collanach baptized the child Tairchell. brought him up at his school for sons of wise men and nobles.

When Tairchell was about sixteen years of age, he encountered a family of ghosts on the road, but managed to escape by means of three fantastic leaps. The monk Collanach then gave him the name Mo Ling - 'ling' meaning 'leap'.

There is a tradition that Mo Ling is Saint Myllin, who travelled to Wales, baptised people at the holy well in Llanfyllin, Powys, and founded the church there.

Mo Ling was a monk at Glendalough and went on to become Bishop of Ferns. Bede describes Saint Mo Ling as a:

"good and wise man, excellently versed in the knowledge of the Scriptures".

Nineteenth-century accounts suggest there were originally two main pilgrimage days at St Mullins: the feast of St Moling on 17th June and today the Pattern Day is held on the Sunday before 25th July. On 25th July prayers are said at St. Moling's well and in the graveyard.

John O'Donovan in his Ordnance Survey Letters of 1840 tells a story of Mo Ling crossing a small hill when an evil spirit annoyed him. He knelt on a rock to curse the spirit, leaving the impression of his knees on the stone. While there is no account of the stone today, it is said that the incident gave the name to the townland Cloch na Mallacht (meaning "the stones of the curses").

One of the great deeds attributed to St Moling is that in 674 he begged Finaghta the Festive to renounce solemnly for himself and his successors the ború - tribute - or annual cattle tax which for generations the kings of Meath (at Tara) had exacted from the Leinstermen. This was regarded as a great feat by the Leinster men who greatly honoured Moling for it.

Moling, like St. Francis, is said to have loved animals, many of whom – wild and tame – he kept around him in honour of their Maker, and they would eat out of his hand. Among them was a fox, who one day stole a hen that belonged to the monks and ate it. The monks complained to Moling, who scolded the fox. The fox, seeing his master’s anger, went off to the nearby convent, and brought back a hen and placed it, safe and sound, at Moling’s feet. Moling, smiling, said to the fox:

‘You offer plunder to atone for theft. Take back this hen unharmed to the sisters. And from now on you must live without stealing.’

The fox took the hen back to the nuns. Both monks and nuns rejoiced and blessed God.

The Fox and the Book

Another time a fox stole a book from the community and hid it, intending to come back shortly and chew it up. But when he came back to the monastery, the monks found the fox stealing and eating a honeycomb. They brought the fox to Moling, accusing him of stealing the book. Moling bade them let the fox go free, but he said to the fox:

‘Be off, you crafty creature! Bring me back that book unharmed, and quickly.’

Off went the fox, brought back the book, setting it down at the saint’s feet, as if seeking forgiveness.

‘Get up, you wretch,’ said Moling, ‘and never touch a book again.’

Ever after, whenever any one would jokingly show the fox a book, he immeditely took to flight (Plummer, Latin Life of Moling).

The Bald or Barren Place

A local family went to work in the fields as usual. Suddenly St. Moling appeared to them. One of those present attempted to run away and he was turned into a stone at the place he had reached which is called 'Stuckan-na-Drana'.

The workers who remained eating their lunch were also turned into stones. This happened at a place called 'Maol Oula' the Bald or Barren Place.