St Mochta as an important saint in Ireland, as is evident by the number of stories that grew up around his name.

He was born in Britain but was brought to Ireland as a child. He is said to have been a disciple of Saint Patrick, and was educated and consecrated bishop in Rome by Pope St. Leo Ist, others believe he was consecrated by Saint Patrick. 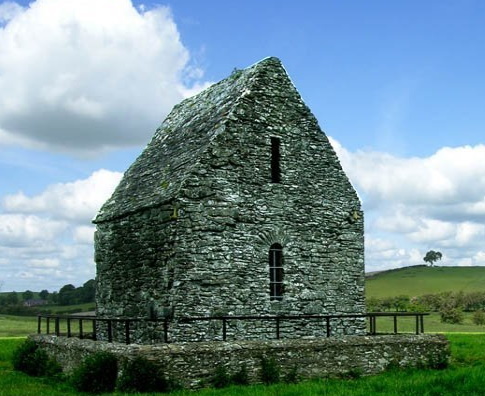 When he returned to Ireland, he settled at a place now unknown, called Kell Mor Ydan, Co. Meath.

He moved north to Louth after encountering local oppostion in Meath.

Louth was originally the site of a shrine to the Celtic god Lugh.

Saint Mochta founded a large monastery that gained a nation wide reputation. Both monastery and village were burned and plundered frequently by the Danes in the period 829-968. St Mochta’s chapel exists in Louth but this was built in the 1200’s.

St Mochta is claimed as the first bishop of Louth.

Among the legends that arose, he and Patrick made a pact that each would care for the other's community after the founder's death.

It is also claimed that Mochta numbered 200 bishops among his disciples and lived to be 300 years old - Scholars believe that he, the last of Patrick's disciples then alive, died at 90.

Saint Mochta’s real historical importance lies in the confession of faith which he wrote to Pope Leo the Great to assure Rome of his orthodoxy.

By law and by rule,

That no dainty food should enter his body

For the space of one hundred years."