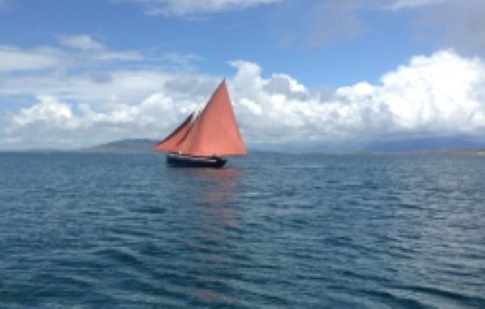 St. Macdara is celebrated on 16th July each year with the Féile Mhic Dara (Macdara Festival) being held annually in Carna, Galway, on the west coast of Ireland, in the Gaeltacht.

On this day, there has been a long tradition of pilgrimage to the church on the island for Mass and celebration, helped by local fishermen giving their time and their boats to ferry people out to the uninhabited Oileán Mhic Dara – or St. Mac Dara’s Island from Mace pier in the morning and back in the afternoon.

Others go in their own currachs, boats of canoes. After the mass, everyone enjoys some time on the island, celebratory picnics take place – weather permitting – and then it’s time for the Féile Mhic Dara regatta for the Galway Hookers.

There’s also currach rowing races, another smaller type of boat common on the west coast of Ireland, before all being ferried back home in the afternoon, where festivities continue in Carna in the form of live music and céilidh dances.

The island is said to have once been home to Sinach Mac Dara, patron saint of the parish of Moyrus.

St. MacDara is the patron saint of local fishermen and sailors and is believed to offer protection to sailors, fishermen and all who brave stormy seas.

According to Tim Robinson, this association may stem from the fact that the saint’s first name of Sinach is close to the Gaelic word síon, meaning stormy weather. Old lrish folklore suggested St. Mac Dara would subject storms on those who didn’t acknowledge him through the old tradition of dipping your sails three times when passing by the island.

‘a certain captain of the garrison at Galway, neglected to dip his sails and ended up being killed in a shipwreck.'

Thanks in large part to stories like this, the old tradition is as widely respected now by Connemara boaters as it ever has been.

The church itself is very small, so much so, that it is believed that perhaps it was a tomb shrine for its founder.

St. MacDara’s Island Monastery is one of the best examples in Ireland of an early Christian oratory. It is believed that a wooden monastery was founded by St. Macdara in the 6th century, and the stunning stone church which we see today, probably built in the 10th century but modelled exactly on the earlier wooden one.

I can’t remember which year was the first time I went to the island but it do remember that it was on a Galway hooker, True Light. We had headed to Carna for the Féile and only just found a B&B and the bean an tighe was heading out to the island and brought us along. Her husband was the skipper of the True Light and brought us out and back from the island. That was the start of a wonderful friendship and many more Macdara’s Days.