There’s a popular belief, if it rains on St. Swithin’s Day, it will rain for 40 days, but if it is fair, 40 days of fair weather will follow.

This day is associated with the weather forecast for the English summer, in the rhyme:

A Buckinghamshire variation has:

If on St Swithun's day it really pours
You're better off to stay indoors.

St Swithin or Swithun, born around 800, was Anglo-Saxon Bishop of Winchester, from his consecration on 30th October 852 until his death on 2nd July 863. He became an adviser to Anglo-Saxon Kings Egbert and Aethelwulf and later a mentor to the young future King Alfred. He was adopted as the patron saint of Winchester.

Legend says that as he lay on his deathbed, he asked to be buried, unlike previous bishops, outside Winchester Cathedral,

"where the rain would fall on him and the feet of ordinary men could pass over him."

For nine years, his wishes were followed. However, in 971 this was overruled by his reform-minded successor, Aethelwold. He arranged for St Swithin's remains to be moved to a more fitting, opulent shrine inside the cathedral and made his predecessor patron saint.

The work began on 15th July, but it couldn't be finished then, or for many years afterwards. Torrential rains prevented it on the first day and these continued for forty days and forty nights. It was said that St. Swithin, who had detested any outward display or ostentation, was weeping in protest. 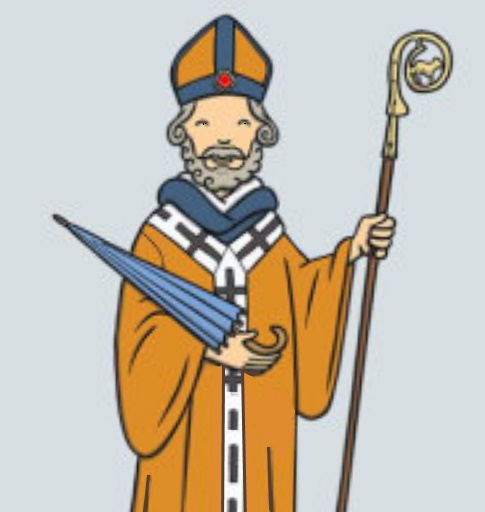 The countryside was flooded and the monks beseeched St. Swithin to intercede for them. It's said that he appeared to one of his monks and revealed to him how displeasing it was to God to spend their time in useless expenditures of time and money which might easily be spent with more advantage in the relief of the poor and needy; he also forbade the monks to ever interfere with his remains again.

In 963, the work on the mausoleum was finally completed, but, by then, the legend of St. Swithin as a rain-saint was firmly established.

As regards the weather forecast.

According to the Met Office, there is precisely no evidence that the weather on 15th July is a good way to predict the weather over the next 40 days and nights, up to 23rd August.

But there is a grain of truth in it, as weather often locks into a pattern in high summer, only changing when autumn begins to rear its head from the end of August.