Mardi Gras is French for "Fat Tuesday", reflecting the practice of the last night of eating rich, fatty foods before the ritual Lenten Sacrifices and fasting of the Lenten season.

Related popular practices are associated with Shrovetide celebrations before the fasting and religious obligations associated with the penitential season of Lent. In countries such as the United Kingdom, Mardi Gras is also known as Shrove Tuesday, which is derived from the word shrive, meaning "to administer the sacrament of confession to; to absolve".

Mardi Gras, as a celebration of life before the more-sombre occasion of Ash Wednesday, nearly always involves the use of masks and costumes by its participants. In New Orleans, for example, these often take the shape of fairies, animals, people from myths, or various Medieval costumes as well as clowns. However, many costumes today are simply elaborate creations of coloured feathers and capes. Unlike Halloween Costumes, Mardi Gras costumes are not usually associated with such things as zombies, mummies, bats, blood, and the like, though death may be a theme in some. The Venice tradition has brought golden masks into the usual round of costumes. 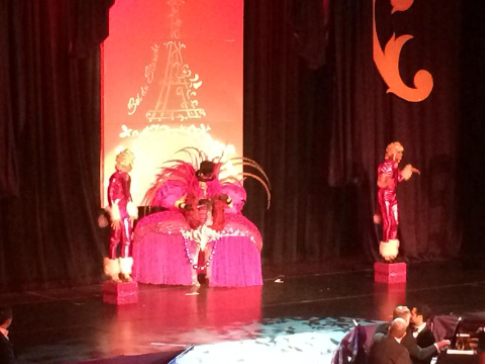 In the Czech Republic it is a folk tradition to celebrate Mardi Gras, called Masopust (meat-fast i.e. beginning of a fast). There are celebration in many places including Prague but the tradition also prevails in the villages such as Staré Hamry, whose the door-to-door processions there made it to the UNESCO World Intangible Cultural Heritage List.

The celebration in Germany is known by many different terms, such as Schmutziger Donnerstag or Fetter Donnerstag (Fat Thursday), Unsinniger Donnerstag, Weiberfastnacht, Greesentag and others. These are often only one part of many carnival events during one or even two weeks before Ash Wednesday called Karneval, Fasching, or Fastnacht depending on the region.

In standard German, schmutzig means "dirty", but in the Alemannic dialects schmotzig
means "lard" (Schmalz), or "fat"; "Greasy Thursday" when remaining winter stores of lard and butter used to be consumed before the fasting began. Fastnacht means "Eve of the Fast", but all three terms cover the whole carnival season.

In Italy Mardi Gras is called Martedì Grasso (Fat Tuesday). It's the main day of Carnival along with the Thursday before, called Giovedí Grasso (Fat Thursday), which is the start of the celebrations. The most famous Carnivals in Italy are in Venice, Viareggio and Ivrea. Ivrea has the characteristic "Battle of Oranges" that finds its roots in medieval times. The Italian version of the festival is spelled Carnevale.

In Sweden the celebration is called Fettisdagen, when you eat fastlagsbulle, more commonly called Semla. The name comes from the words "fett" (fat) and "tisdag" (Tuesday). Originally, this was the only day one should eat fastlagsbullar.

Mardi Gras arrived in North America as a French Catholic tradition with the Le Moyne brothers. Pierre Le Moyne d'Iberville and Jean-Baptiste Le Moyne de Bienville, in the late 17th century, when King Louis XIV sent the pair to defend France's claim on the territory of Louisiane. The French Mardi Gras customs had accompanied the colonists who settled there.

The first Mardi Gras parade held in New Orleans is recorded to have taken place in 1837. The tradition in New Orleans expanded to the point that it became synonymous with the city in popular perception, and embraced by residents of New Orleans beyond those of French or Catholic heritage. Mardi Gras celebrations are part of the basis of the slogan Laissez les bons temps rouler ("Let the good times roll").

On Mardi Gras Day, the Tuesday before Ash Wednesday, the last parades of the season wrap up and the celebrations come to a close with the Meeting of the Courts (known locally as the Rex Ball).

Other cities along the Gulf Coast with early French colonial heritage, from Pensacola, Florida; Galveston, Texas; to Lake Charles and Lafayette, Louisiana; and north to Natchez, Mississippi and Alexandria, Louisiana, have active Mardi Gras celebrations.

Mardi Gras was celebrated on a grand scale in Galveston in 1871 with the emergence of two rival Mardi Gras societies, or "Krewes" called the Knights of Momus (KOM) and the Knights of Myth, both of which devised night parades, masked balls, exquisite costumes and elaborate invitations. The Knights of Momus, led by some prominent Galvestonians, decorated horse-drawn wagons for a torch lit night parade. Boasting such themes as "The Crusades," "Peter the Great," and "Ancient France," the procession through downtown Galveston culminated at Turner Hall with a presentation of tableaux and a grand gala. In the rural Acadiana area, many Cajuns celebrate with the Courir de Mardi Gras, a tradition that dates to medieval celebrations in France.

St. Louis, Missouri, claims to host the second largest Mardi Gras celebration in the United States.The celebration is held in the historic French neighborhood, Soulard and attracts hundreds of thousands of people from around the country. Although founded in the 1760s, the St. Louis Mardi Gras festivities only date to the 1980s. The city's celebration begins with "12th night," held on Epiphany, and ends on Fat Tuesday. The season is peppered with various parades celebrating the city's rich French Catholic heritage.

Anne is sharing a series of Notable Dates and Festivals throughout the year - you can find them listed by clicking to the link here.