Losar Festival, is the most important on the Tibetan calendar, celebrated on the first to third days of the first lunar month.

The Losar festivities have roots dating back to the pre-Buddhist period of the Bon religion. Every winter, local spirits and deities were given offerings such as incense to please them. Later on the festival became an annual Buddhist farmers’ festival held during the blossoming of flowers on apricot trees. Over time, when the lunar calendar came into being, the farmer’s festival became the festival of Losar.

Preparation for the festivities begin a month beforehand. Houses are thoroughly cleaned, new clothes are made to wear during the festival, and different food offerings are made on the family altar. The eight auspicious symbols and other signs are drawn on the house walls using white powder or are hung as wall hangings. The monasteries are also decorated and the protector deities are respected with devotional rituals. 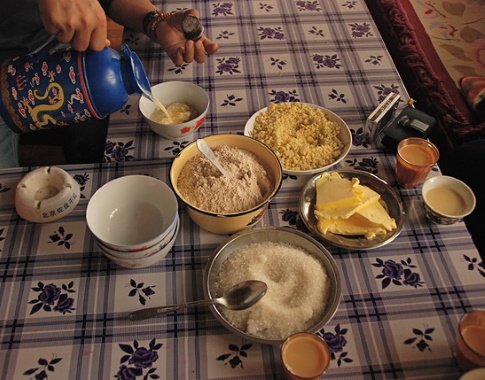 First Day - Lama Losar - all Tibetan Buddists greet their respective gurus and wish each other prosperity for the year ahead. Then they visit the local monastery to offer prayers and attend sermons.

For a good harvest, offerings of barley seeds and tsampa (roasted barley mixed with tea and yak's milk or salty butter tea) are made to home altars. Tibetan women get up early to cook barley wine and prepare a dish called Dresi.

Second Day - King’s Losar - the Dalai Lama exchanges greetings with national leaders. In ancient times a tribute was paid to the kings who would also offer gifts to the public.

Third Day - Choe-kyong Losar - Offerings are given to the various Gods and protectors Prayer flags are hung and devotees visit monasteries, shrines and stupas.

After the three days, Tibetans there are parties and get-togethers for 15 days ending the festivities with Chunga Choepa, the Butter Lamp Festival at the first full moon.


Anne is sharing a series of events throughout the year - you can find them listed by clicking to the link Other Notable Dates and Festivals.