It is an ancient Hindu festival, that is celebrated predominantly in India but which has lately became popular among non-Hindu communities as well. Holi heralds the arrival of spring after winter. It signifies the victory of good over evil and celebrates the blossoming of love. The festival celebrates the beginning of a good spring harvest season.

It lasts for a night and a day, starting on the evening of the Purnima (Full Moon day) falling in the Vikram Samvat Calendar, in the Hindu calendar month of Phalguna, and around middle March in the Gregorian calendar.

The first evening is known as Holika Dahan (burning of demon holika) or Chhoti Holi and the following day as Holi, Rangwali Holi, Dhuleti, Dhulandi, or Phagwah.

Holi calls to put an end to any hard feelings that might have cropped up during the year. People apply colour and give each other a friends hug as they greet Holi, the tradition is called, 'Holi Milan'. It is strongly believed that even enemies turn to friends on the day of Holi. There is acceptance of each other.

Holi begins with the Holika bonfire

According to Bhagvata Purana, King Hiranyakashipu - the king of demonic Asuras, who could neither be killed by a man nor an animal - grew arrogant and demanded that everybody should worship him as god. The king's son, Prahlada, disagreed and chose to remain devoted to Vishnu.

Hiranyakashipu was infuriated and subjected his son to cruel punishments. Finally, Holika, the king's sister, tricked him into sitting on a pyre with her. While Holika protected herself with a cloak, Prahlada remained exposed. As the fire blazed, the cloak flew from Holika's body and encased Prahlada, thus saving his life. Later, Vishnu appeared in the avatar of Narsimha, half man and half lion, and killed the king. This is why Holi begins with the Holika bonfire, which marks the end of evil.

According to legend, Lord Krishna had developed a characteristic blue skin colour after Putana, a demon, poisoned him with her breast milk. Krishna worried if the fair-skinned Radha and her companions would ever like him because of his skin colour. Krishna's mother then asked him to approach Radha and smear her face with any colour he wanted.

Holi celebrations start on the night before Holi with Holika Dahan, where people perform rituals in front of a bonfire, praying for their inner evil to be destroyed, just as Holika was killed in fire.

This picture is from Glasgow's Kelvingrove Museum where they held a colourfull flowers workshop to celebrate Holi. 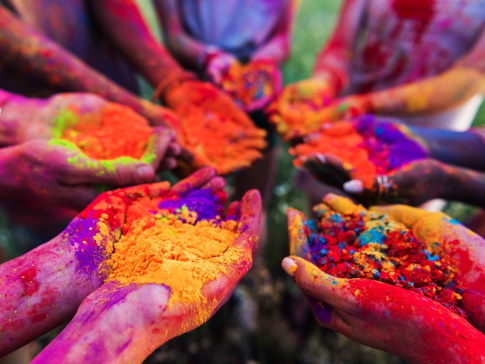 The carnival of colours begins the next morning, where people come out on the streets to play with colours, and drench each other in coloured water through water guns or balloons. Personal space is ignored and all are equal in an intense experience.

The customs and rituals may be different across regions but what unites them is the spirit of this festival of colours.

Each color also carries a meaning.

Red symbolizes love and fertility and is the colour of love, energy and vibrancy.

Orange is the color of turmeric, a powder native to India and used as a natural remedy; often associated with happiness, festivity, sacredness and optimism.

Green represents peace and faith. It is a cool colour and has soothing effects. It shows new beginnings and creative expression of emotions.

Green is for new beginnings It stands for peace, harmony and purity. This beautiful colour has a calming and healing effect