Thorrablot “Þorrablót” (pronunciation: thaw-rah-blow-t), is an Icelandic midwinter festival, named for the month of Þorri of the historic Icelandic calendar (corresponding to mid-January to mid-February).

According to the old Norse calendar, Þorriis is a month that starts “on a Friday in the 13th week of winter“, generally around January 20th. The name comes from an ancient Norwegian king, and in old Norse it is synonymous with frost. Before the 10th century, Icelanders worshiped the Æsir, or Norse gods. During Thorri (which runs from mid-January to mid-February), locals celebrated Thorrablot, a midwinter festival named for either Norwegian king Thorri Snærsson or the God of Thunder himself, Thor.

Although the old Norse months are not observed anymore they do coincide with some traditions that are still widely celebrated. The first day of Þorri, for example, is Bóndadagur (Husband’s day), on which wives give their husbands flowers, while the first day of Harpa is also the first day of summer.

The midwinter feast Thorrablot in Iceland is held at any time during the month of Þorri, which begins on the first Friday after January 19th (the 13th week or 4th month of winter on the old Scandinavian calendar). Thorrablot is a north Germanic sacrificial celebration of a winter or weatherspirit named Thorri and takes place only in Iceland.

After Norwegian king Olaf Tryggvason Christianized Iceland in 1000 AD, pagan beliefs and practices faded away. But in the late 19th century, a group of Icelandic students resurrected Thorrablot. Icelanders really put the holiday back on the map (and restaurant menus) after World War II, when a rise in nationalism gave way to a cultural revival.

Thorrablot takes place in the coldest dark days of the year, and it's interesting to keep in mind that many of the foods served are actually the smoked/pickled produce of the previous year. 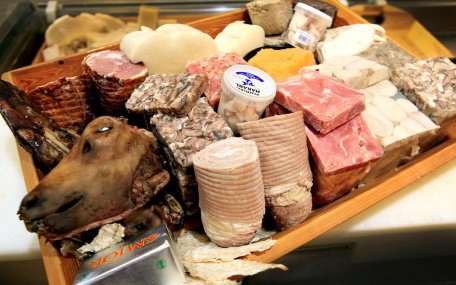 The Thorrablot celebration starts with dinner. Icelanders serve what was normal day-to-day food for Vikings, and turn back to nature-made food that is smoked, laid in mysa (a sour milk-product), salted, dried, or kaestur (rotting and setting meat).

For the faint of stomach, smoked salmon, sausages, ryebread, and flat bread are also on the menu. Participants wash it all down with brennivín, (“burning wine”), a caraway flavoured schnapps that is a potent local liquor that’s fondly referred to as “Black Death.”

This Typical Thorrablot food is called Thorramatur and is available in many Icelandic restaurants in January and early February. Thorrablot fare isn't for queasy stomachs, though, and is usually not suitable for children due to the strange foods and alcohol. Enjoy it as an adults-only event, though enjoy is not quite the word that comes to mind!

After the Thorrablot dinner, get ready for group games and old songs and stories, accompanied by Brennivin. It'll definitely get that rotten meat taste out of your mouth.

Later in the evening, dances start and often continue until the early morning when Thorrablot celebrations draw to an end.

In case you are tempted by Thorramatur here are more details:

What I do know is that the Dísablót was celebrated in honour of the Dísir, which translates into "ladies", and were the Norse goddesses.

Quote from an article by Thomas Eriksson, Östergötland, Sweden. You can read the full piece here - end January - Dísablót