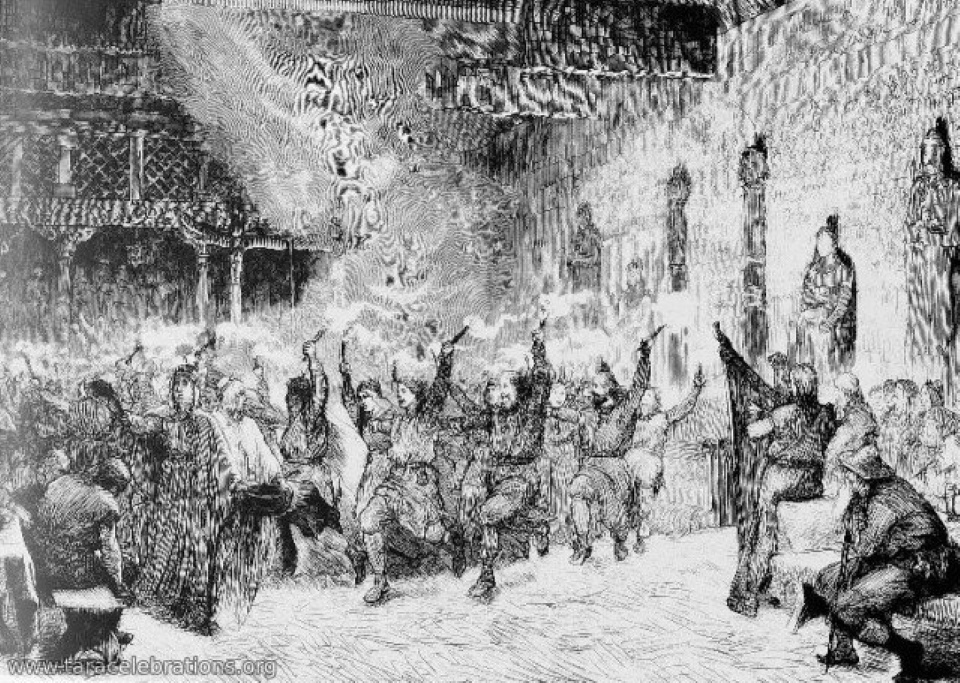 Many thanks to Thomas Eriksson, Motala, Östergötland, Sweden for this article. Thomas participated in the Tara celebrations/ritual meditations whilst living in Ireland. He liked what he saw, made a connection with his homeland in Sweden and has drawn parallels between the two cultures.

What I do know is that the Dísablót was celebrated in honour of the Dísir, which translates into "ladies", and were the Norse goddesses.

Also the valkyries and norns were Dísir. I assume you know of the valkyries, who were responisble for bringing fallen warriors to Valhalla. The norns were goddesses of fate, the most famous being Urðr, Verðandi and Skuld. Who you might known as "The Wyrd Sisters" or "The Weird Sisters", "Wyrd" being an old English word for Urðr, meaning "Fate". 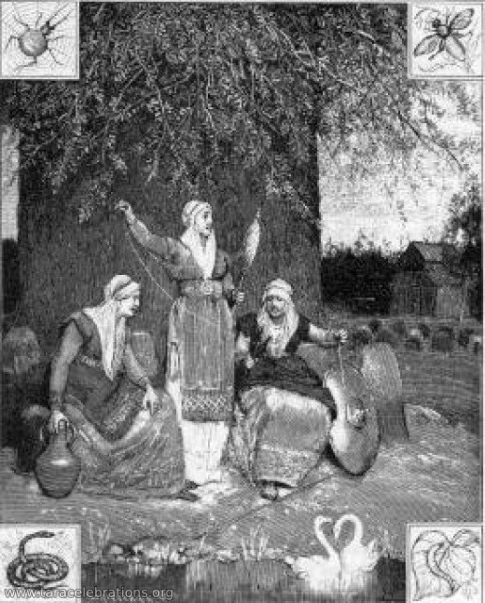 The Three Norns The Goddesses Urth, Verthandi and Skuld. The Norns stand at the base of the World Tree.

The main goddess for the Dísablót was Freyja (some times known as Vanadís), who was the leader of the dísir and the goddess of fertility. The blót was mainly held to insure a good harves for the coming year.

The symbols for Freyja include: the falcon (which was her shape-shifted form), the boar (she and her twin brother/husband Freyr both owned a magical boar), her necklace (made of golden and amber and forged by the three most skilled dwarven smiths and traded to her with a night in bed for each of them), her cloak (made of falcon feathers and allowed her to change into any kind of bird) and a chariot pulled by cats.

One source (Hervarar saga) leads us to belive that the Dísablót was held solemny by women, but another one (Heimskringla) says that it was led by the high priest of Uppsala, who was also the king of Sweden.

The first of these sources say that the doughter of the elven king was kidnapped while preparing the hörgr (an altar made with piled stones) with blood. The second one tells us that the king Aðils, who supposedly ruled Sweden during the 6th century, died when falling of his horse and splitting his skull while riding around the shrine.

The Disting, or "Disæþing" as it was called in the old nordic tongue, was a big fair held in Uppsala in conjunction with the Dísablót. It was sometime called the "Ting of all Swedes" (ting being an political assembly), because so many people assembled from all around Sweden (or what was Sweden at the time), or at least Svealand, to meet and trade with each other. The fair lasted for about a week and was abolished in 1895. This is from Snorri Sturlusons saga Heimskringla:

"In Svithjod it was the old custom, as long as heathenism prevailed, that the chief sacrifice took place in Goe month at Upsala. Then sacrifice was offered for peace, and victory to the king; and thither came people from all parts of Svithjod. All the Things of the Swedes, also, were held there, and markets, and meetings for buying, which continued for a week: and after Christianity was introduced into Svithjod, the Things and fairs were held there as before. After Christianity had taken root in Svithjod, and the kings would no longer dwell in Upsala, the market-time was moved to Candlemas, and it has since continued so, and it lasts only three days."

Goe month means February and Svithjod is Svealand (which I have mentioned earlier) and that was the northenmost part of Sweden at the time, before the big part in the north was incorporated (parts of which was stolen from Norway and Finland). Svealand is the part of Sweden that actually gave it its current name.