His parents were named Erean and Comgella. As a boy Senan was placed under the guidance Abbot Cassidan, and then finished his studies under St. Naul at Kilmanagh, Co. Kilkenny. Senan founded a church near Enniscorthy, in either 510 or 512. The parish is still known as Templeshannon (Teampul Senain).

He then visited Cornwall, founding a church at Sennen's Cove, another was founded in Brittany, France at Plouzane (church of Senan). He is also believed to have visited Menevia, Rome and Tours. He returned to Ireland around 520. 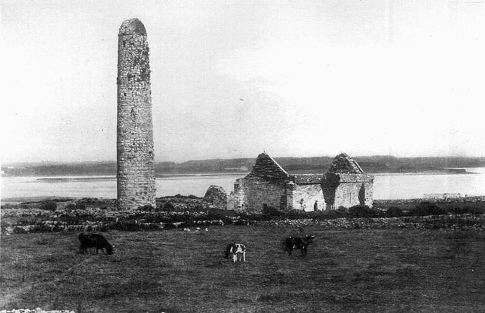 Having founded churches at Inniscarra, Co. Cork, at Inisluinghe, at Deer Island, Inismore, and Mutton Island, he finally settled at Iniscathay, or Inis Cathaigh, Co. Clare. He was visited by Saints Ciarán and Brendan, and other holy men, who had heard of his sanctity and miracles.

Inis Cathaigh (Scattery Island) became a famous abbey and seat of a bishopric with St. Senan as it's first bishop. This event may be dated as somewhere between 535 and 540.

The legend of "St. Senanus and the Lady", as told in Tom Moore's lyric, says that no woman was allowed to enter Inis Cathaigh; not even St. Senan's sister, St. Cannera, was permitted to land there. Yet St. Senan founded two convents for nuns, and was actually on a visit to one of them when he died. Legend has it that when St. Cannera died, she willed it that she should be buried near Senan. To stay true to his own edicts, Senan waited until low tide to bury her in the inter-tidal zone, which was not officially part of the "island", thus fulfilling his sister's wish while not breaking his own rules.

St. Senan was buried in the abbey church of Iniscathay on 8th March, on which day his feast is observed. One of the earliest references to the Round Tower of Inniscathay is in the Irish life of St. Senan.