Dwynwen lived during the 5th century and legend has it that she was one of the prettiest of Brychan Brycheiniog’s 24 daughters.

Dwynwen fell in love with prince Maelon Dafodrill, but her father had already arranged her marraige to someone else. Dwynwen was upset that she could not marry Maelon so she asked God to make her forget him. Dwynwen was visited by an angel in her sleep, who carried a potion to erase all memory of Maelon and turn him into a block of ice.

All three were fulfilled, in gratitude, Dwynwen became a nun and set up a convent on Llanddwyn Island, a beautiful place on Anglesey.

Dwynwen’s well became a place of pilgrimage after her death in 465AD. Visitors to the well believed that the sacred fish or eels that lived in the well could foretell whether or not their relationship would be happy and whether love and happiness would be theirs.

There is also Crochan Llanddwyn, (Llanddwyn’s cauldron), which is a small wishing well that is located in a rabbit warren between Llanddwyn Island and Newborough. According to folklore, if the water of the well boils while visitors are present, love and good luck will follow. 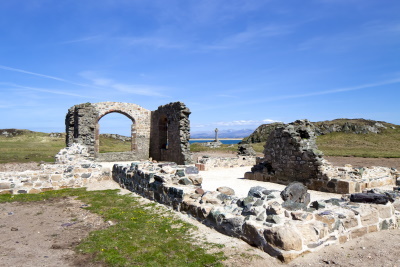 Remains of Dwynwen’s church can still be seen today. You can visit St. Dwynwen’s church on Llanddwyn. It is a tidal island, meaning it remains attached to the mainland at all but the highest tides.

A Welsh love spoon is traditionally given as a St. Dwynwen’s day gift. In 2007, the world’s largest ever love spoon was carved and measures a whopping 44ft.

Also in 2007, a group of Denbighshire farmers celebrated St. Dwynwen’s Day by turning their milk bottles into makeshift lonely heart ads, attaching pictures of themselves to them with a message inviting people to ‘Fancy a Farmer’! It remains a mystery as to whether St. Dwynwen’s magic was able to help these plucky farmers get a date.