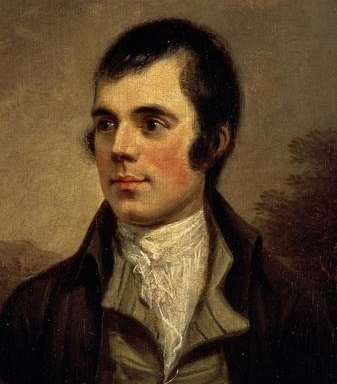 This painting of Burns is by Alexander Nasmyth and hangs in the Scottish National Portrait Gallery, Edinburgh.

January 25th, Burns Night, is the night when many dinners are held all over the world celebrating the life and poetry of the poet Robert Burns.

Robert Burns (25January 1759 – 21 July 1796) is a Scottish poet, admired not only for his verse and great love-songs, but also for his character and wit, his high spirits, ‘kirk-defying’, hard drinking and womanising!

The ritual of the Burns Supper was started few years after his death by some of his close friends. The chairman of the Supper invites the assembled company to welcome in the haggis. Everyone stands as the haggis is brought in.It is usually brought in by the cook on a large dish, generally while a piper plays the bagpipes and leads the way to the host's table,where the haggis is laid down. The poem ‘Address To a Haggis’ is read.

The first verse of this is -

Fair fa' your honest, sonsie face,
Great chieftain o the puddin'-race!
Aboon them a' ye tak your place,
Painch, tripe, or thairm:
Weel are ye worthy o' a grace
As lang's my arm.

At the end of the poem, a whisky toast will be proposed to the haggis, and the company willsit down to the meal. The haggis is traditionally served with mashed potatoes (tatties) and mashed turnips (neeps).

The evening ends with arousing rendition of ‘Auld Lang Syne’. 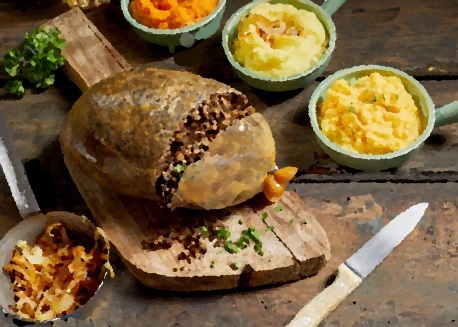 As a boy, Burns loved stories of the supernatural told to him by an old widow who sometimes helped out on his fathers’ farm and when Burns reached adulthood, he turned many of these stories into poems.

After the death of his father in 1784, Burns inherited the farm but by 1786 he was in terrible financial difficulties: the farm was not successful and he had made two women pregnant.

Burns decided to emigrate to Jamaica so to raise the money required for this journey, he published his ‘Poems in the Scottish Dialect’ in 1786, which was an immediate success. He was persuaded not to leave Scotland by Dr Thomas Blacklock and in 1787 an Edinburgh edition of the poems was published.

He married Jean Armour in 1788 – she had been one of his many women during his early life. A very forgiving wife, she accepted and took responsibility for all Burns’ children, legitimate and illegitimate alike. His eldest child, the first of three illegitimate daughters all called Elizabeth, was greeted with the poem ‘Welcome to a Bastard Wean’.

Burns died aged 37 of rheumatic fever which he contracted after falling asleep at the roadside (after a particularly vigorous drinking session) in pouring rain.

The last of Burns’children was actually born during his funeral service.

There are many Burns songs that I remember from choir in school, “Comin’ thru the Rye”; ‘John Barleycorn’; ‘Sweet Afton” and “a Red Red Rose” and of course there’s “Auld Lang Syne” sung every New Year's Eve.

“We’ll drink a cupof kindness yet for the sake of auld Lang Syne. “