St David is the patron saint of Wales and he plays a very important role in Welsh culture.

It is said that he died in 589, and was over 100 years old. His father was Sant, a grandson of the King of Ceredigion, in South West Wales. His mother was Non or Nonita, said to be a niece of King Arthur, others say she was a nun. There is also a claim that St Patrick was born in the area and David's birth was foretold by Patrick.

The tradition that he was born at Henfynyw (Vetus-Menevia) in Ceredigion.

David became known as Dewi Dyfrwr (‘David the water drinker’) because of his modest monk’s diet of bread and water. Even meat and beer were forbidden.

Gwnewch y pethau bychain or “Do the little things” are considered to be his most famous words, and potentially his final ones. St David believed that the people of Wales should do the small, considerate things that often make a big difference. He is said to have been very gentle and physically strong and tall.

St David travelled widely throughout Wales, Cornwall in the south-west of England, Brittany in France and possibly to Ireland and Jerusalem. He became renowned as a teacher and eventually became an archbishop. 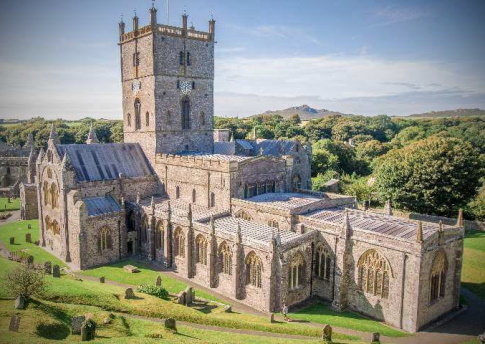 After St David’s death, a shrine was built in his honour at St David's Cathedral at St Davids, Pembrokeshire. This was a popular place of pilgrimage throughout the Middle Ages. Pope Callistus II thought of it so highly that he declared that two pilgrimages to the shrine was worth one to the Vatican in Rome.

St Davids is Britain’s smallest city, During the 10th and 11th centuries the Cathedral was regularly raided by Vikings, who removed the shrine from the church and stripped off the precious metal adornments. In 1275 a new shrine was constructed, the ruined base of which remains to this day, which was originally surmounted by an ornamental wooden canopy with murals of David, Patrick and Denis.

By the 12th century, more than 60 churches in Wales had also been dedicated to St David. He was canonized in 1120 and 1st March was made St David's Day.

St David is said to have performed many miracles. It's claimed he restored a blind man’s sight and brought a dead boy back to life, simply by splashing his face with tears.

His most famous miracle though, took place in Llanddewi Brefi, between the Brecon Beacons and the coastal town of Aberystwyth. While he was preaching to the crowd some of the crowd were finding it difficult to hear the sermon. A white dove landed on David’s shoulder. As it did, the ground on which he stood rose up to form a mighty hill, making it possible for the gathered crowd to finally see and hear him. David is often shown holding a dove standing on a hillock. The dove became St David’s emblem, often appearing in his portraits and on stained glass windows depicting him. Today, a church stands on the crest of that special hill.

His symbol is the leek. As legend has it, David ordered Welsh soldiers to wear leeks in their helmets before fighting the Saxons and it was this that secured victory.