St. Patrick is the patron saint of Ireland. His year of birth is uncertain, with some scholars hitting on 373 while others calculate 390. It is said that he was born in Roman Britain and when he was fourteen or so, he was captured by Irish pirates during a raiding party from the villa of his father, Calpurnius, a deacon and minor local official.

He was taken to Ireland as a slave to herd and tend sheep on Mount Slemish in Co. Antrim.

According to his autobiographical Confessio Patrick's captivity lasted until he was twenty, when he escaped after having a dream from God in which he was told to leave Ireland by going to the coast. There he found some sailors who took him back to Britain and was reunited with his family.

A few years after returning home, Patrick saw a vision he described in his memoir:

I saw a man coming, as it were from Ireland. His name was Victoricus, and he carried many letters, and he gave me one of them. I read the heading: 'The Voice of the Irish.' As I began the letter, I imagined in that moment that I heard the voice of those very people who were near the wood of Foclut, which is beside the western sea-and they cried out, as with one voice:

'We appeal to you, holy servant boy, to come and walk among us.'

The vision prompted his studies for the priesthood. He was ordained by St. Germanus, the Bishop of Auxerre, whom he had studied under for years, and was later ordained a bishop and sent to take the Gospel to Ireland. 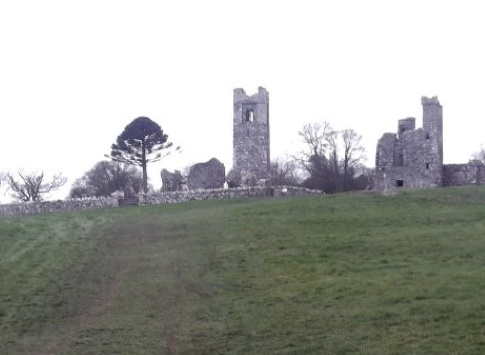 Patrick arrived in Slane, Ireland on 25th March, 433. There are several legends about what happened next, with the most prominent claiming he met the chieftan of one of the druid tribes, who tried to kill him. After an intervention from God, Patrick was able to convert the chieftain and preach the Gospel throughout Ireland. There, he converted many people - eventually thousands - and he began building churches across the country.

Although he is often credited with having brought Christianity to Ireland, he was not the first to have done so as Palladius was preaching to the Irish before Patrick arrived. Patrick preached and converted all of Ireland for 40 years. After years of living in poverty, traveling and enduring much suffering he died 17th March 461 at Saul, where he had built the first Irish church. He is believed to be buried in Down Cathedral, Downpatrick. His grave there was marked in 1990 with a granite stone. Another legend says he is buried in Armagh.

Snakes, raising people from the dead and feeding hungry sailors.

One of the most famous is that Patrick drove the snakes of Ireland into the sea to their destruction. However, there were never any snakes in Ireland! So does the legend have other meanings? The serpent was the symbol of the Druids so was it the Druids that St Patrick drove from Ireland, by threatening them with death if they didn't convert to christianity?

Patrick wrote that he raised people from the dead, and a 12th-century hagiography places this number at 33 men.

He also reportedly prayed for the provision of food for hungry sailors traveling by land through a desolate area, and a herd of swine miraculously appeared.

Patrick used the Shamrock to explain the concept of the Holy Trinity, three persons in one God, to an unbeliever by showing him the three-leaved plant with one stalk. 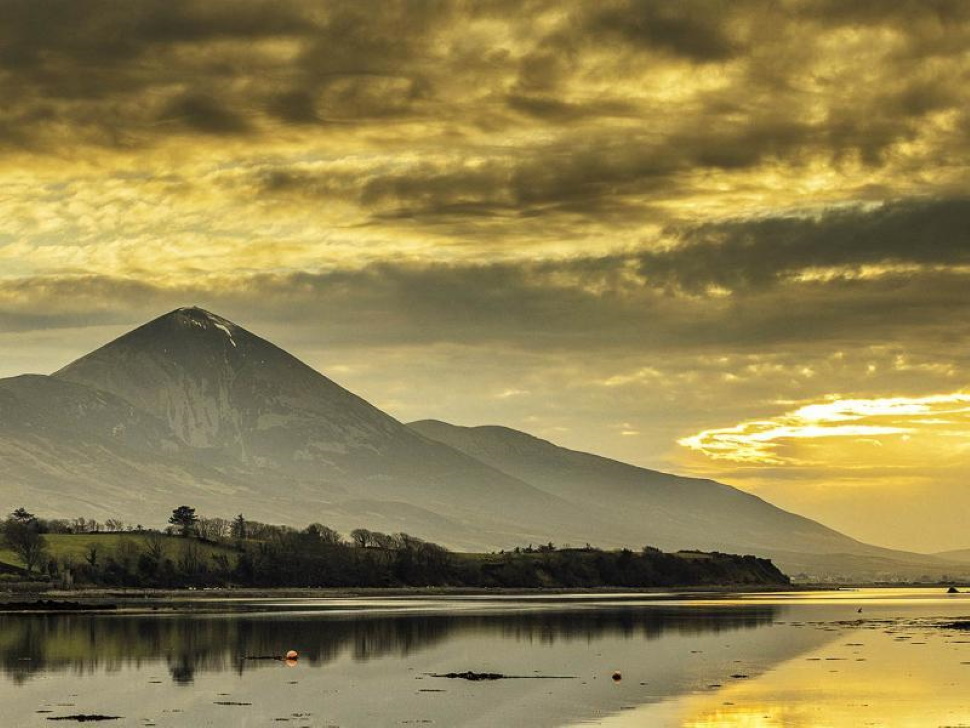 St Patrick spent the forty days of Lent on Cruach Aigle mountain in County Mayo which is now known As Croagh Patrick.

During these days, he was harassed by demons disguised as blackbirds. The birds formed such dense clusters that turned the sky black. But according to this legend, Saint Patrick continued to pray and rang his bell as a proclamation of his faith.

In answer to his prayers, an angel appeared and told him that all his petitions on behalf of the Irish people would be granted and they would retain their Christian faith until Judgement Day. 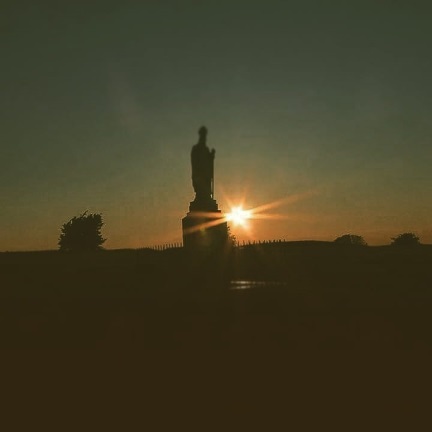 Attributed to St Patrick, the poem known as The Deer's Cry or St Patrick's Breastplate, tells the story of how the saint used a power called féth fíada to transform himself and his companion into wild deer so that they could escape ambush while on their way to preach at the Hill of Tara, the ancient capital of Ireland and the sacred place of the Druids.

Awaiting the arrival of Patrick and his companion with the intention of attacking or imprisoning the two Christians, their Celtic adversaries saw only a deer with a fawn roaming across the fields. So the missionaries successfully reached the Hill without incident.

As well as the custom of wearing shamrock and green on St. Patrick’s Day there are also another very old custom that used to be common. Traditions from Cill Rialaig, Co Kerry, is that the people would wear a ‘cros cipín dóite’ or ‘cross of charred pin’. The ‘cross’ was made of burnt sally twigs and worn on the right arm.

There also used to be a custom of making Patrick’s Day badges, one type for boys and another for girls. Examples of these can be found in the National Museum of Country Life.

“For a week or so preceding the National Festival, the grown members of the family are occupied in making “St Patrick’s Crosses” for the youngsters, boys and girls; because each sex have a radically different “Cross”. The “St Patrick’s Cross” for boys, consists of a small sheet of white paper, about three inches square, on which is inscribed a circle which is divided by elliptical lines or radii, and the spaces thus formed are filled in with different hues, thus forming a circle of many colored compartments. Another form of St Patrick’s Cross is obtained by drawing a still smaller circle, and then six other circles, which have points in the circumference of this circle, as their centre, and its centre as their circumferential point, are added; after which one large outer encompasses the whole, thus forming a simple and not inartistic attempt at imitating those circles or bosses of our beautiful Celtic cross pattern. The many spaces, concave, convex or otherwise, thus formed are then shaded in; each a different hue and constitutes the “St Patrick’s Cross”…. (Danaher 1972).

”Boys wore their crosses on their caps (Danaher 1972).

For the girls the cross....

“is formed of two pieces of card-board or strong thick paper, about three inches long, which are places at right angles, forming a cross humette. These are wrapped or covered with silk or ribbon of different colors, and a bunch or rosette of green silk in the centre…. The cross was then worn pinned to the chest or shoulder of the girl. " 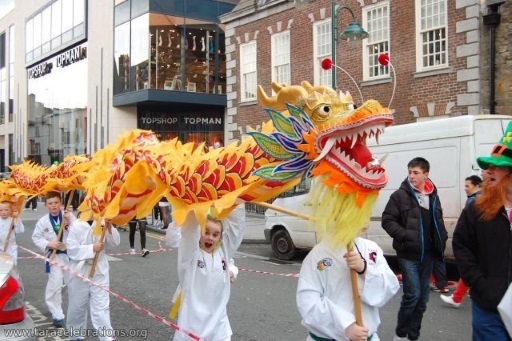 Celebrations have changed significantly over time. A parade was held in Dublin from the 1950s, but it was an industrial pageant. Companies would have a float in the parade and there was a competiton for the best float. Alcohol could not be sold, and St. Patrick’s was a holy day of observation.

New York, Boston, Chicago, Liverpool and London held parades and festivities. St. Patrick’s Day was perhaps more celebrated among Irish emigrants and people of Irish descent than in Ireland itself. Then in 1969,the parade was taken over by Dublin Tourism and it became a general parade with American marching bands, majorettes, and cheerleaders as a central feature.

Then in 1996 the parade was transformed into a large scale carnival event, similar to Mardi Gras and the American St. Patrick’s Day parades. It received Government and State backing and the parade turned into a major tourist event, with Irish arts, music, dance, culture, and food taking centre stage.

Now, 17th March is the focus of a four-day festival, aimed at the international and domestic tourism markets. Irish Government ministers routinely travel to key trading countries to promote Irish enterprise and culture. The Irish Prime Minister annually presents a bowl of Shamrock to the sitting U.S. President on the day.

The religious roots of the day have, to a large extent, become shrouded and forgotten; the festival today is as much associated with emigration, carnival, commercialisation, and other influences, and is celebrated by people of all religions and none.

St. Patrick’s Day is Lá Fhéile Pádraig and is also called Paddy’s Day, which comes from the Irish name Padraig.

However, never, ever call it Patty’s Day. It’ not done!