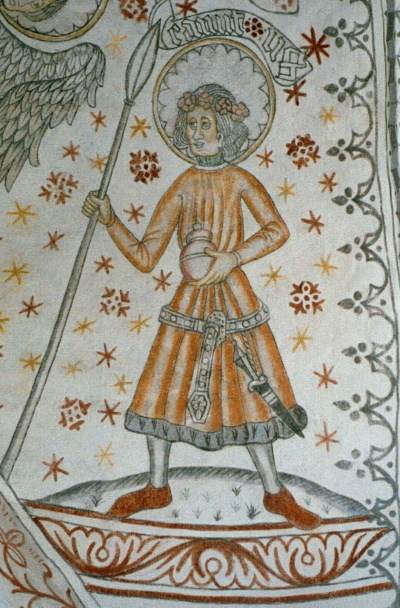 This photo is taken from en.wikipedia.org - St Knut's Day

Knutdagen, the Day of Knut, is said to have got its name for the Danish Duke Knut Lavard (1096 – 1131). He was murdered just outside Ringstedt in Denmark, on the 7th January in the year 1131, by his cousin Magnus. Magnus viewed Knut as a rival, well-positioned to rise to power as the successor of King Nils (the father of Magnus).

Knut was canonized and declared a saint near the end of the 17th century. The Christmas period was extended by one week and the week of Knut now lasted from 7th to 13th January.

Tjugonday Knut is celebrated only in Sweden, Norway and Finland. In most other countries Christmas is considered well and truly over by then.

In Sweden it is celebrated by taking out the Christmas tree and dancing around it. Any remaining edible decorations are happily eaten. The feast held during this event is called a Knut's party (Julgransplundring, literally"Christmas tree plundering"). Then Christmas is driven outby throwing the Christmas tree out.

It is also customary to knock on the walls to scare out any Jultomten - Christmas goats - who are hiding in the house!

Sometimes there is a man dressed as “Knut” in a kind of crazy ragged costume who helps to sweep out Christmas. Many places in Sweden had old pagan traditions linked to this day. Children would dress up in costumes and wear masks. They would go from door to door carrying a male doll made of straw, the Knut’s Gubbe (Old Man Knut or Knot, depending on how you choose to translate it). The idea is to be invited in for treats and a drink but stay in role without your everyday identity being revealed. Dolls of straw, made to resemble an old Crone, were carried around as well and pose a direct link to the older Grandma Goddess tying her cosmic knot and so a much older, pre-Christian festival lurks behind the feast day of a Christian saint

In Finland on Nuutinpäivä, a tradition was that young men dressed as goats (Finnish: Nuuttipukki) would visit houses. Usually the dress was an inverted fur jacket, a leather or birch bark mask, and horns. Unlike Santa Claus, Nuuttipukki was a scary character who reminds me of the German Krampus. The men dressed as Nuuttipukki wandered from house to house, came in, and typically demanded food from the household and especially left over alcoholic beverages. In Finland the Nuuttipukki tradition is still kept alive in some areas of South West Finland.

A proverb from Noormarkku says:

St Thomas’ Day is 21st December. It would appear there had to be a balance of good and evil.